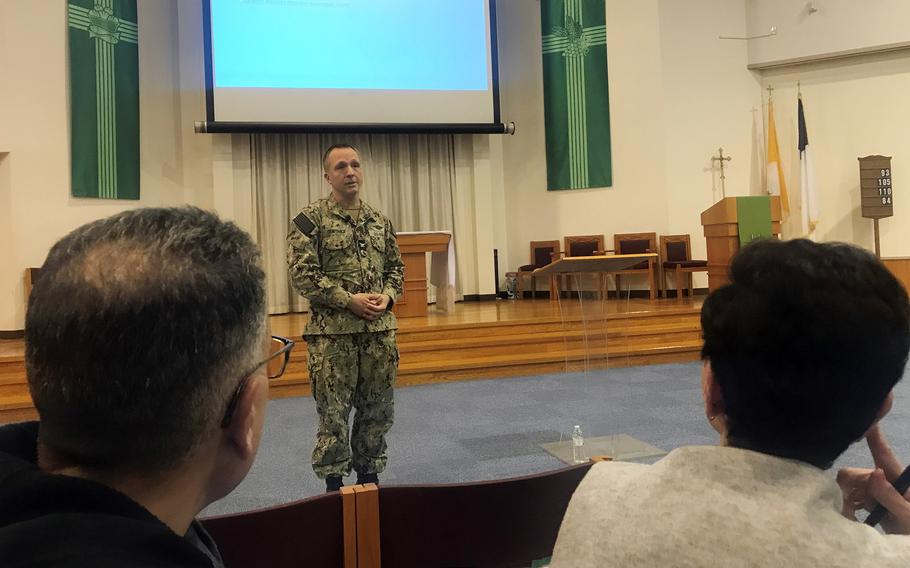 Carter, one of about 100 people attending a town hall Thursday at the MCAS Iwakuni chapel, said she suffers from an ongoing, or chronic, condition called polymyalgia rheumatica, an inflammatory disorder that causes muscle pain and stiffness, especially in the shoulders and hips. She depends on a steroid, prednisone, to ease her pain, she said at the meeting.

“This is a matter of life or death for me,” she said. “A Japanese doctor will not give me prednisone for that condition because they just tell me to deal with the pain for a couple of years and it will go away.”

For nearly two hours, Carter and others told the base’s hospital commander the impact the DHA mandate will have on their medical care. MCAS Iwakuni’s is the third town hall at a U.S. base in Japan where hundreds have turned out for information and to protest the mandate. Earlier this month, Yokosuka Naval Base in December and Yokota Air Base held public forums where the DHA change was addressed. 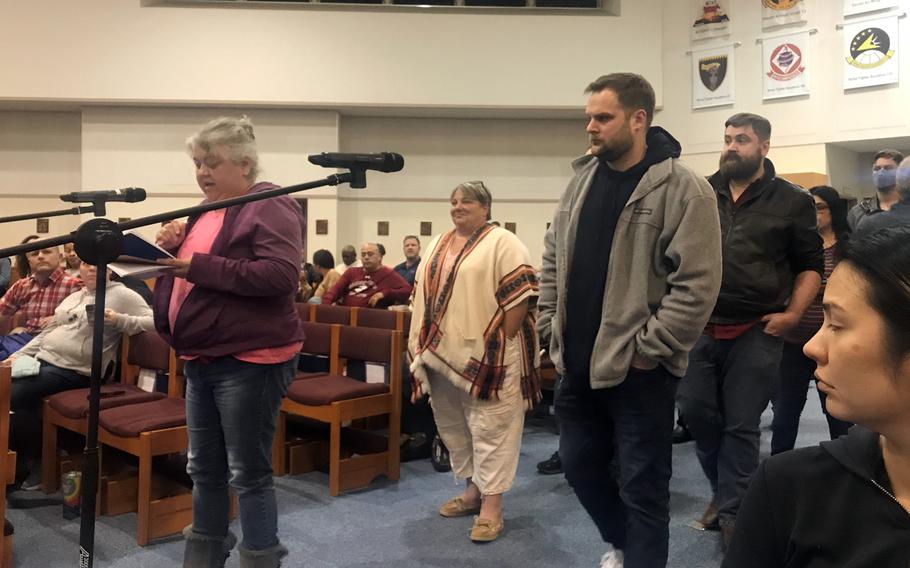 As of Jan. 1, DOD employees like schoolteachers, contractors, federal agency employees and commissary and exchange workers are limited to urgent or acute care and some specialty clinics at base hospitals in the Indo-Pacific region. Some U.S. civilian employees of Stars and Stripes fall into this category.

For routine and ongoing care for chronic conditions like diabetes, heart disease or cancer, they are encouraged to seek Japanese health care providers.

At Thursday’s town hall, Dr. James Demitrack, a Navy captain in charge of the Naval Family Branch Clinic Iwakuni, said he has delayed implementing the space-available policy until Jan. 23 and encouraged people to schedule appointments before that date.

Demitrack said he could not predict how many appointment slots would be available each day. DHA recommends that military hospitals in Japan post available slots each morning on their Facebook pages. For those that do, the number of slots range from a handful to none and are quickly booked.

“So, it’s very difficult to predict because the demand is part of the equation,” Demitrack said. “We don’t know on a given day how many appointments are going to be requested before 10 a.m. We have increased our appointments in primary care from about 90 in September per day to well over a 110 per day right now.”

Four people said they may have to leave their jobs at MCAS Iwakuni because of inadequate access to medical care off base.

Iwakuni is a hardship location, Diane Pospisil-Kinney, clinical supervisor of the community counseling program, said at the town hall. Her program is one of the behavioral health services at the base clinic.

“This is going to have a direct impact on our staffing,” she said. “The majority of staff members over at behavioral health are worldwide hires, civilians. If we cannot retain them and we cannot fill new positions, we are not able to provide behavioral health services for active-duty service members and their families.”

The counseling program works to reduce suicide among service members, among its other responsibilities, Pospisil-Kinney said.

“We are preventative, we do everything we can to keep the active-duty service member from going to the mental health clinic for suicide ideations and beyond,” she said. “If we are not there, we are going to see an increase and that is a huge concern.”

Demitrack said the impacts of restricted health care on recruiting and retaining civilian employees “are certainly something that’s on everybody’s mind, including mine.”

“I’m in no position to answer that,” he said. “I agree this is going to present challenges for the entire community because everyone is connected.”

The air station commander, Col. Richard Rusnok, like base and hospital commanders at Yokota on Jan. 5, commiserated with the group Thursday.

“In the world we live in right now and the threats that we face, this is not something that we necessarily wanting to be dealing with right now,” Rusnok said as the town hall concluded. “We will do our level best.”

He said DOD civilians provide the essential services that service members and their families rely on day to day.

“You survive on the backs of your civilians for food chain, schools, food health programs, alcohol case support, victim advocacy, child care, gyms, child abuse support, even flight simulators, IT support, fuel service,” Carter said. “What happens if we all take our toys and go home?”