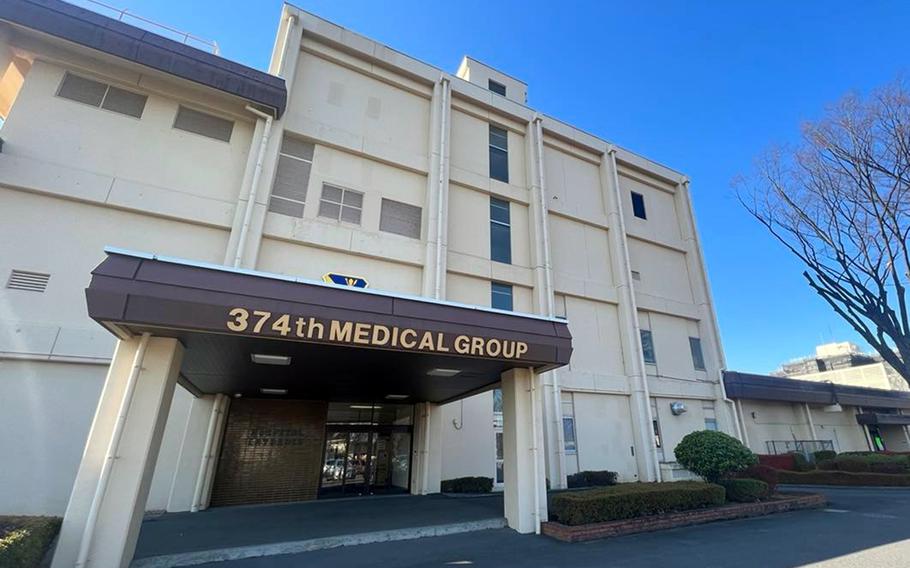 The 374th Medical Group handles patients at Yokota Air Base, the home of U.S. Forces Japan in western Tokyo. (Kelly Agee/Stars and Stripes)

Editor’s note: A previous version of this report incorrectly stated that two employees of the Defense Special Representative, Japan, had left their jobs because of restricted access to health care at Yokota Air Base.

YOKOTA AIR BASE, Japan — Kristin Pine-Duarte, 46, a fourth-grade teacher at Yokota West Elementary School, stepped up to a microphone Thursday evening at a town hall in the base Enlisted Club with frustration in her voice.

She can’t just step out of her classroom for an hour or two on short notice if she gets lucky enough to book a “space-available” appointment at the base hospital, she said.

Dr. Michael Brough, the Air Force colonel commanding the 374th Medical Group, commiserated but said he could do little more to change the order that throttles health care for Defense Department civilian employees at this airlift hub in western Tokyo.

“I’ll be honest, but we don’t have an answer,” he said. “Not the answer you’re going to like.”

DOD civilians’ access to routine health care at military bases across the Indo-Pacific region, including “episodic, non-recurring and acute health conditions,” was reduced to space-available appointments by the Defense Health Agency starting Jan. 1.

Those civilians — some longtime patients at the base hospital — were instructed to check morning postings on the medical group’s Facebook page and quickly dial the appointment phone line to schedule one of the few slots available.

Unless they find a Japanese health care provider, DOD civilians will have only space-available access to family medicine, internal medicine, pediatrics and gynecology clinics at military treatment facilities in the Indo-Pacific, according to Heck.

Base hospitals are required by law to prioritize care for active-duty service members and their families, whose numbers are used to calculate the staff and services available at base hospitals, Brough said. Civilian employees like teachers, contractors, support personnel and agency staff take a back seat. U.S. civilian employees at Stars and Stripes Pacific are affected by this order.

Brough described measures his staff took to increase the number of space-available slots.

Appointments will now be available on family days, the fourth day typically granted military families on three-day federal holidays, he said. Training days will be reduced to half days to permit appointments on that day’s schedule.

No-shows by active-duty members who book medical appointments will be discouraged, according to Brough and his boss, Col. Andrew Roddan, commander of the 374th Airlift Wing. 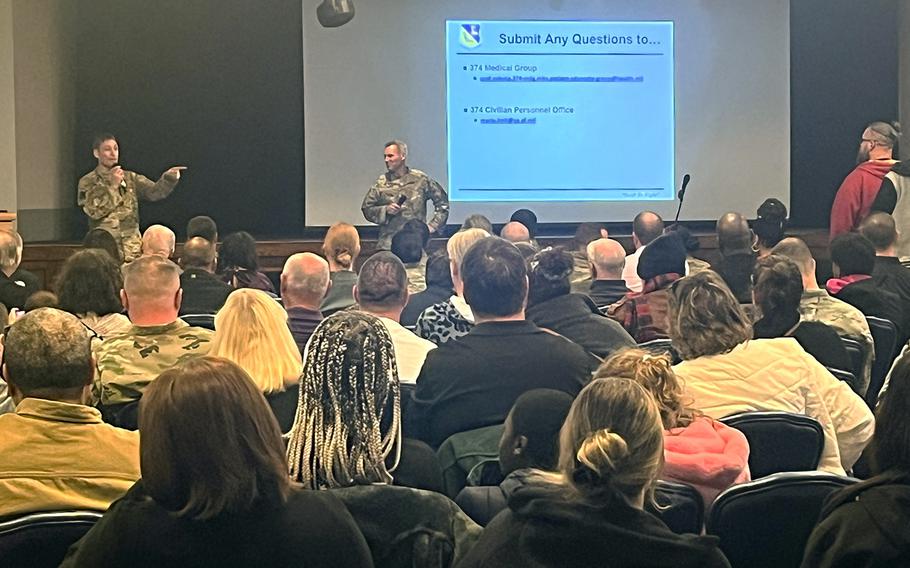 ‘We’re pushing back on DHA’

Brough and Roddan sympathized with the approximately 300 people who turned out for the two-hour session.

Roddan described the DHA order as a readiness issue.

Already, three hires have declined job offers due to the reduced availability of health care on base, Joy Garrett, director of the Defense Special Representative to Japan, said at the microphone.

Jacob Love, 33, of San Antonio, a contracts specialist on base, said he and his, wife, Annie, are having second thoughts about having a third child because of the change in health care access. His family has been at Yokota three years and hoped to stay longer, he said.

“As long as I could,” he told Stars and Stripes after the town hall. “I love this place.”

Brough said commanders at hospitals and clinics across Japan, South Korea and Guam lobbied for changes to the original DHA order.

“Everything we requested was not approved,” he said, “but we were able to get some additional add-ons to the instruction.”

At Yokota, DOD employees may still make routine appointments to some specialty clinics, including orthopedics, dermatology and audiology. Prenatal care and labor delivery services are still available. Walk-in services such as immunizations, contraceptive medications and prescription refills not available in the host nation are also available.

The Japanese government cannot force hospitals to provide care to U.S. civilians covered by the status of forces agreement, Roddan said. SOFA, which covers the rights and responsibilities of people in Japan with the U.S. military, does not address access to health care.

Brough and Roddan urged the audience to continue lobbying their congressional representatives about changing the DHA mandate.

Connie Wood, 58, of Rochester, Wash., a reading teacher at Yokota Middle School, said she’s been in Japan 3 ½ years and before that spent seven years in South Korea. Federal employees earned their access to medical care, she said at the microphone.

“Some of us will have been here for decades,” she said. “We have grown old in service to this community.”