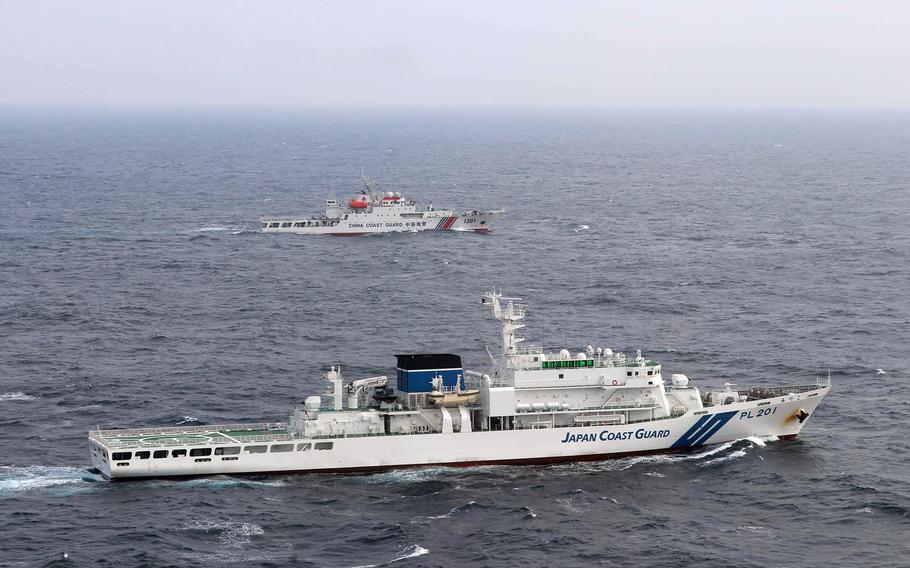 CAMP FOSTER, Okinawa — Japan will buy more coast guard vessels and aircraft and step-up surveillance in the East China Sea in response to an increasing Chinese presence there over the past year, according to recently released security and budget documents.

The island nation plans in fiscal 2023 to purchase a 6,000-ton vessel capable of carrying a helicopter, two 3,500-ton vessels, a pair of 26-ton vessels, three mid-sized helicopters, a 62-ton survey vessel and a vessel earmarked for international operations, according to budget documents posted on the Japan Coast Guard website Dec. 23.

The outlays were approved Dec. 16 during a Cabinet meeting at Prime Minister Fumio Kishida’s office in Tokyo, according to meeting minutes posted on the prime minister’s website that day.

“Protecting the territories, waters and air of our country is our top priority,” Kishida said at the meeting, which was called to review policy surrounding the strengthening of the coast guard, according to the minutes.

“The situation around the waters of our country is getting more tense; it is necessary to strengthen the joint capabilities with the [Japan Self-Defense Force] and other countries and strengthen the system of the Coast Guard,” he said.

The new expenditures will be added to a list of approved helicopters, as many as 15 other ships and three drones scheduled for purchase through fiscal 2025, the budget documents state.

One of the newly added vessels will be delivered in fiscal 2023 but the majority will arrive in fiscal 2025 or 2026, according to the budget. Japan’s fiscal year runs from April 1 through March 31.

The Japan Coast Guard has so far made no changes to its operation, a coast guard spokesman told Stars and Stripes by phone Friday. Some government officials in Japan are required to speak to the media only on condition of anonymity.

China has been increasingly active in the East China Sea and Miyako Strait this the past year, the coast guard spokesman said. The strait, an international waterway, separates Okinawa and Miyako Island 175 miles to the southwest.

The Chinese and Russian navies trained together Dec. 21-27 in the East China Sea and China’s aircraft carrier Liaoning and its strike group practiced carrier landings Dec. 17-31, after passing through the Miyako Strait.