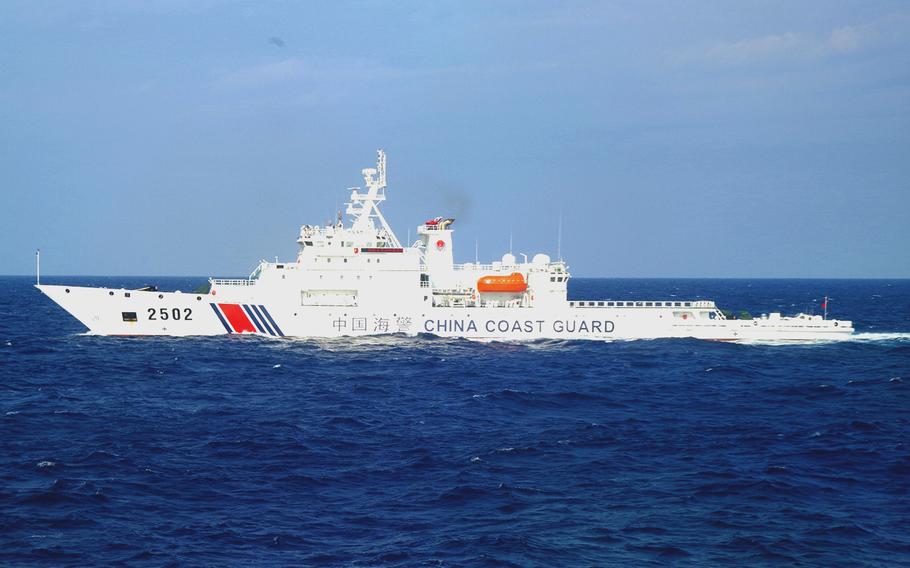 CAMP FOSTER, Okinawa – Tokyo lodged diplomatic protests with China over alleged intrusions Wednesday by the China Coast Guard into waters Japan claims as its territory around the Senkakus, islets in the East China Sea, according to Japan’s Foreign Ministry.

The complaint follows one lodged Monday over the alleged intrusion of a Chinese naval survey vessel into waters south of Kyushu, the southernmost of Japan’s four main islands.

Also Wednesday, a weeklong joint naval exercise by the Chinese and Russian navies got underway in the same region.

A column of four China Coast Guard ships passed the 12-mile territorial limit around the Senkaku chain at 10:37 a.m. Wednesday and remained for less than two hours, a spokesman for Japan’s 11th Regional Coast Guard told Stars and Stripes by phone on Thursday. He said one of the vessels appeared to be armed with a deck-mounted machine gun.

The four retreated to the contiguous zone, which extends 12 miles beyond the territorial limit, until 9:34 a.m. Thursday when two of the ships re-entered Japan’s territorial waters six miles southwest of the Taisho Island, one of the Senkakus, to shadow a Japanese fishing vessel, the spokesman said. He said the two Chinese vessels were still in the area as of 3 p.m. Thursday, despite repeated warnings by Japan Coast Guard vessels to leave.

Chinese vessels have been known to chase and harass Japanese fishermen operating near the islets.

The intrusion around the Senkakus this week was the 28th this year by a China Coast Guard vessel and the first since Nov. 25, the spokesman said.

The diplomatic protests follow complaints lodged with China on Monday when the Chinese survey vessel entered Japan’s territorial waters about 40 miles south of Kyushu around 6:50 a.m. the same day, according to the Japan Maritime Self-Defense Force. In that incident, the ship remained for approximately four hours before heading west, according to the Self-Defense Force.

Even warships of one country are permitted “innocent passage” through another country’s territorial waters under the U.N. Convention on the Law of the Sea. The convention spells out exceptions to the rule.

On Wednesday, the Chinese and Russian navies commenced a round of previously announced exercises west of the Nansei Island chain that includes Okinawa, according to Japanese public broadcaster NHK.

The Maritime Self-Defense Force on Wednesday dispatched the guided-missile destroyer JS Shirataka from Sasebo Naval Base and a P-1 patrol aircraft from Atsugi Naval Air Facility to surveil four Russian vessels that passed through the Tsushima Strait, which separates Kyushu from the Korea Peninsula, according to a statement on Japan’s Joint Staff website.

The two Russian frigates, a missile cruiser and a destroyer remained beyond 50 miles of Japanese territory.

The exercises are expected to conclude Dec. 27, Foreign Affairs Minister Yoshimasa Hayashi said at a Tuesday press conference in Tokyo. Both nations’ militaries have recently been ramping up operations around Japan, he added.

“This year, we have seen joint navigation by their vessels as well as joint flights by their bombers,” he said in a video clip posted to the ministry’s website. “We will continue to pay constant attention to what impacts those actions may bring, including this exercise.”

A flotilla of six Chinese warships, including the aircraft carrier Liaoning, were spotted in the waters off Japan between Dec. 15 and Tuesday, according to a statement by Japan’s Joint Staff on Wednesday.

The ships traversed the Miyako Strait, which lies between Okinawa and Miyako Island, 175 miles to the southwest, on Friday and performed about 130 takeoffs and landings by helicopters and fighters.