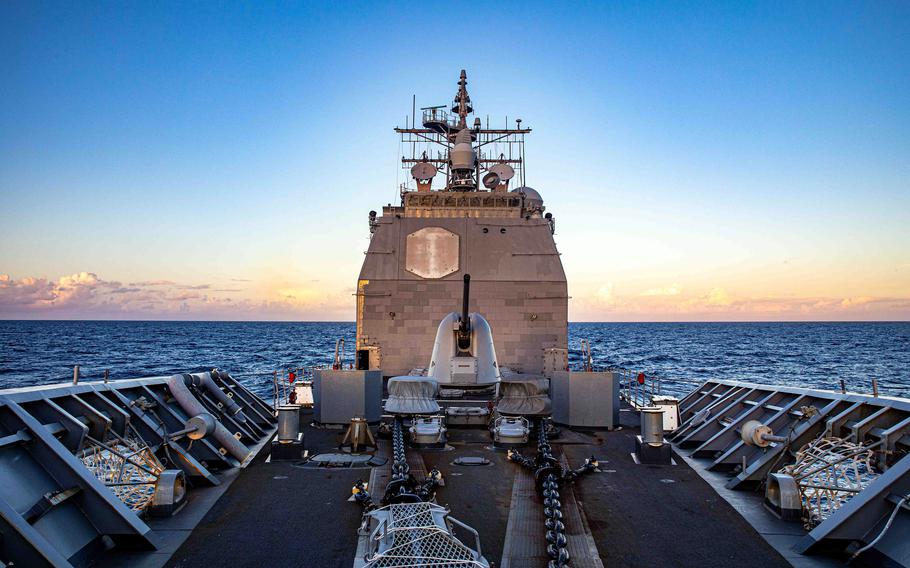 A U.S. Navy guided-missile cruiser steamed past a disputed island chain in the South China Sea on Tuesday, one of the service’s regular freedom-of-navigation operations and the first since July.

The USS Chancellorsville cruised through the Spratlys, a group of about 100 islands between Vietnam and the Philippines, to “assert navigational rights and freedoms” in the region, the U.S. 7th Fleet said in a Tuesday news release. The ship later left the islands’ vicinity and continued regular operations in the South China Sea.

China’s Southern Command on Tuesday condemned the operation as “ironclad evidence” of the United States’ attempt to militarize the South China Sea, according to a statement from its spokesman, air force Col. Tian Junli.

The Spratlys are claimed in full by China, Taiwan and Vietnam, and the Chancellorsville’s presence challenged “unlawful” restrictions imposed by the three countries, including the requirement of permission or advance notice for “innocent passage” through the area, according to the 7th Fleet.

All vessels, including warships, have the right to innocent passage through territorial seas under the U.N. Convention on the Law of the Sea.

“Unlawful and sweeping maritime claims in the South China Sea pose a serious threat to the freedom of the seas, including the freedoms of navigation and overflight, free trade, and unimpeded commerce, and freedom of economic opportunity for South China Sea littoral nations,” 7th Fleet wrote in its release.

The chain has also been militarized, with about 45 islands occupied by small military outposts from the three countries, along with Malaysia and the Philippines, which also claim portions of the archipelago, according to the CIA World Factbook website.

“China has indisputable sovereignty over the South China Sea islands and their adjacent waters,” Tian said Tuesday, according to the Southern Theater Command’s official Weibo social media account. “Theater troops are always on high alert to resolutely safeguard national sovereignty and security as well as peace and stability in the South China Sea.” The 7th Fleet quickly responded to Beijing’s accusations in an updated statement Tuesday afternoon defending the mission as being consistent with international law and calling China’s statement “the latest in a long string” of attempts to misrepresent U.S. maritime operations.

“The operation reflects our continued commitment to uphold freedom of navigation and lawful uses of the sea as a principle,” according to the updated 7th Fleet statement. “The United States is defending every nation’s right to fly, sail, and operate wherever international law allows, as USS Chancellorsville did here. Nothing the [People’s Republic of China] says otherwise will deter us.”

The Chancellorsville’s operations were not affected by any interactions with foreign warships or aircraft, 7th Fleet spokesman Lt. j.g. Luta Bakic told Stars and Stripes by email Tuesday.

The Navy routinely conducts freedom-of-navigation operations near the Spratlys and another chain approximately 500 miles away, the Paracel Islands, which are also claimed by the three countries.

A U.S. guided-missile destroyer, the USS Benfold, conducted a similar operation near the Spratlys and the Paracels in July.

Beijing responded similarly at the time, with Tian calling the U.S. a “security risk maker in the South China Sea” and a “destroyer of regional peace and stability” in a July statement.