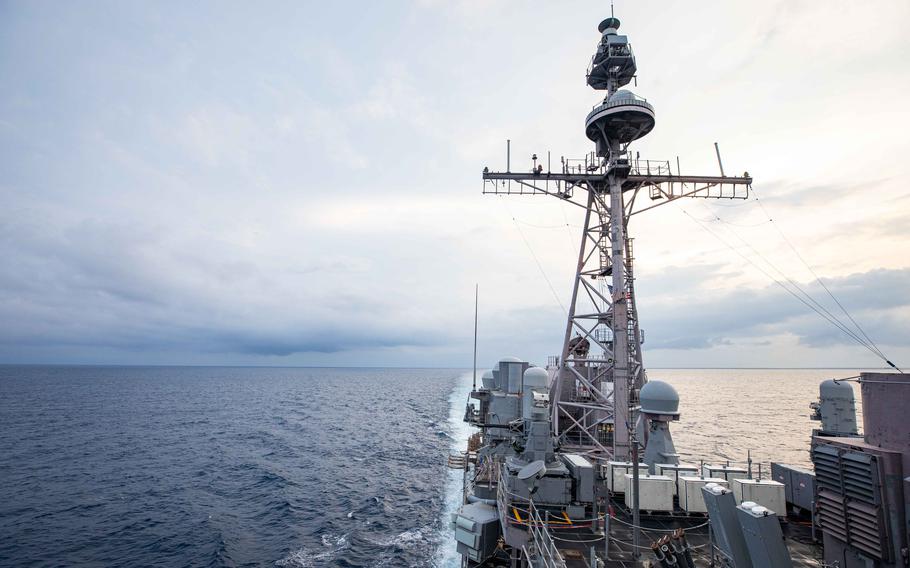 YOKOSUKA NAVAL BASE, Japan — Two guided-missile cruisers steamed through the Taiwan Strait on Sunday, the U.S. Navy's first “routine transit” of the waterway since the Chinese military encircled the island for extensive military drills earlier this month.

The USS Antietam and USS Chancellorsville, both homeported in Yokosuka, sailed “through a corridor of the Strait that is beyond the territorial sea of any coastal State,” 7th Fleet spokesman Mark Langford said in a statement Sunday.

The ships sailed south from the East China Sea and into the South China Sea, a route regularly used to transit between the those areas, 7th Fleet spokeswoman Cmdr. Hailey Sims told Stars and Stripes by email Sunday.

The Navy has sent warships through the 110-mile channel that separates Taiwan from mainland China roughly once a month over the past two years, with the two cruisers’ trip marking the seventh this year. The Navy last sent the guided-missile destroyer USS Benfold through the strait on July 19.

Sunday’s trip was also the first since the Chinese navy and air force wrapped up weeklong military drills surrounding the island on Aug. 11, a response to U.S. House Speaker Nancy Pelosi’s visit to Taipei on Aug. 3. The exercises, which began on Aug. 4, included cruise missile launches and live-fire drills.

Beijing considers Taiwan a breakaway province that must be reunited with the mainland, by force if necessary. Under the “One China” policy, the U.S. acknowledges Beijing’s view that it has sovereignty over Taiwan, which split from the mainland in 1949, but considers Taiwan’s status unsettled. 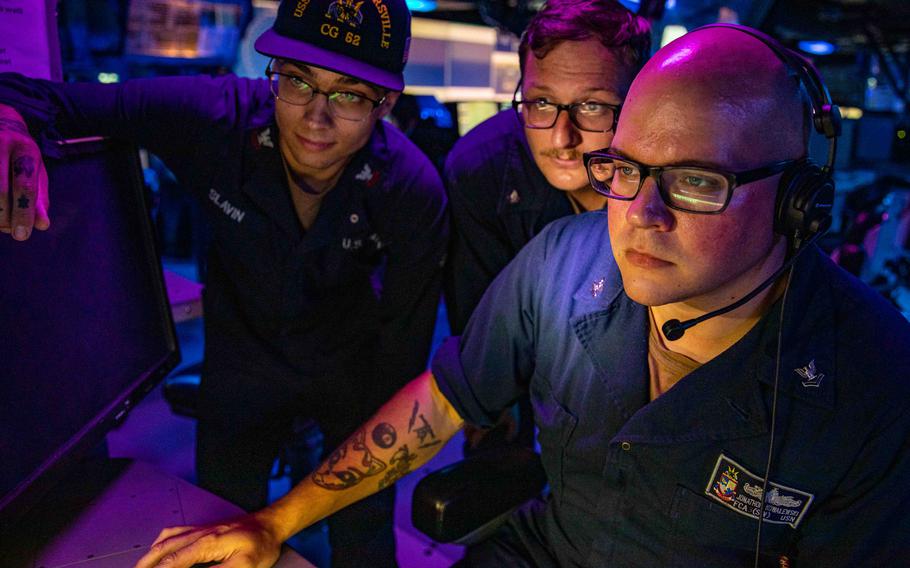 Sailors stand watch in the combat information center aboard the USS Chancellorsville as the guided-missile cruiser sails through the Taiwan Strait, Sunday, Aug. 28, 2022. (Justin Stack/U.S. Navy)

Chinese forces were on high alert, monitoring the ships’ movement and ready to “thwart any provocation,” a spokesman for China’s Eastern Theater Command, Col. Shi Yi, said in a Sunday news release.

The transit appears to be a fulfillment of a promise from the White House to send more ships and aircraft through the Taiwan Strait. Responding to the Chinese drills around Taiwan, White House spokesman John Kirby said the 7th Fleet would send additional forces through the waterway, “consistent, again, with our longstanding approach to defending freedom of the seas and international law.”

“We will not seek, nor do we want, a crisis,” he said during an Aug. 4 press conference. “At the same time, we will not be deterred from operating in the seas and the skies of the Western Pacific, consistent with international law, as we have for decades, supporting Taiwan and defending a free and open Indo-Pacific.”

The 7th Fleet typically sends a single destroyer through the strait, rather than cruisers like the Antietam and Chancellorsville. In May, the guided-missile cruiser USS Port Royal became the first cruiser to make the trip in more than two years, following the Chancellorsville's last transit in February 2020.

While the Navy has occasionally sent two warships through the strait, such as the destroyers USS Curtis Wilbur and USS John S. McCain in 2020, Sunday's transit is the first by two cruisers in recent history, Sims wrote in her email.

“Despite [China's] increase in military presence across the Taiwan Strait, the United States remains committed to unimpeded passage through international waters and will continue to fly, sail, and operate anywhere international law allows,” she said.