‘Warm welcome back’: USS Ronald Reagan returns to Yokosuka just in time for the holidays 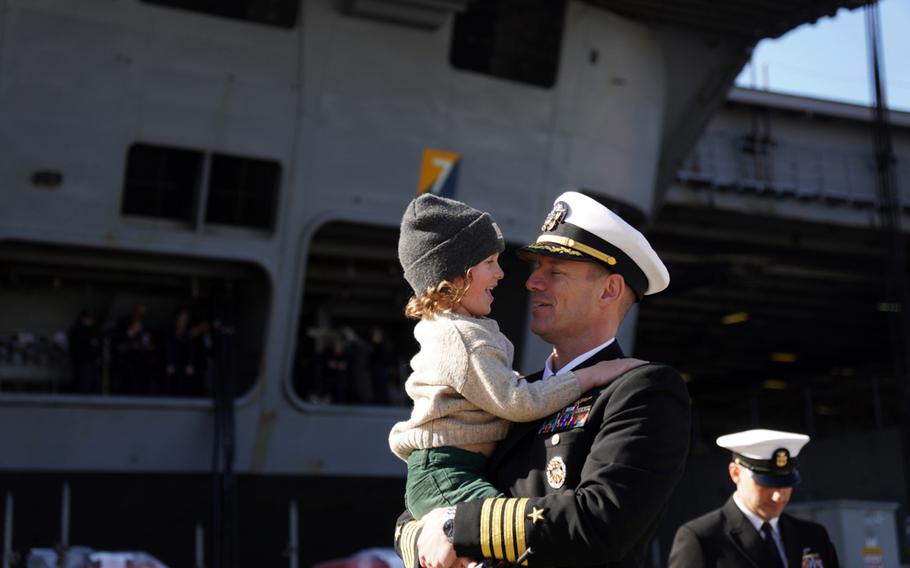 Capt. Justin Issler, executive officer for the USS Ronald Reagan, picks up his son Friday, Dec. 16, 2022, after the carrier returned to Yokosuka Naval Base, Japan (Akifumi Ishikawa/Stars and Stripes)

YOKOSUKA NAVAL BASE, Japan – Hundreds of sailors dressed in their blues manned the rails of the aircraft carrier USS Ronald Reagan as it steamed in Tokyo Bay on Friday on the final leg of its annual Indo-Pacific patrol.

Despite icy winds off the bay, hundreds of the crew’s friends and family members gathered along the pier as the Ronald Reagan returned to Yokosuka, the home of the U.S. 7th Fleet, after more than six months at sea.

The pier also hosted entertainment for the arriving sailors and waiting families, including catered refreshments, live music by the 7th Fleet Band and various special guests, including Santa Claus and a mascot stylized as the ship’s namesake, the late President Ronald Reagan.

The festivities were a livelier contrast to the sparse, no-contact arrivals of the past two years of the COVID-19 pandemic.

“On behalf of the 5,460 sailors aboard the Ronald Reagan today, I’d like to thank you for the warm welcome back to Yokosuka and to thank all the folks here at Fleet Activities Yokosuka for making our return so seamless,” said Capt. Daryle Cardone, the ship’s commander, during a pier-side press conference. 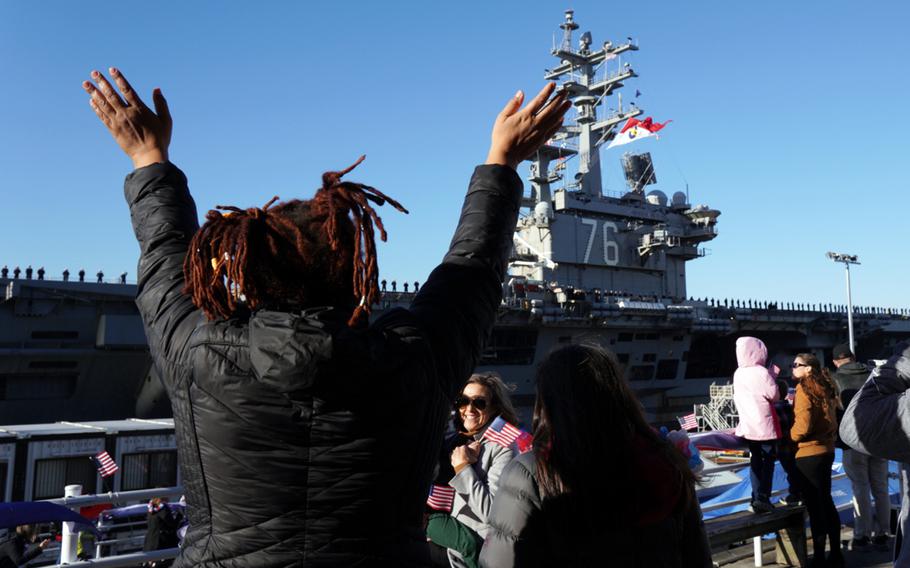 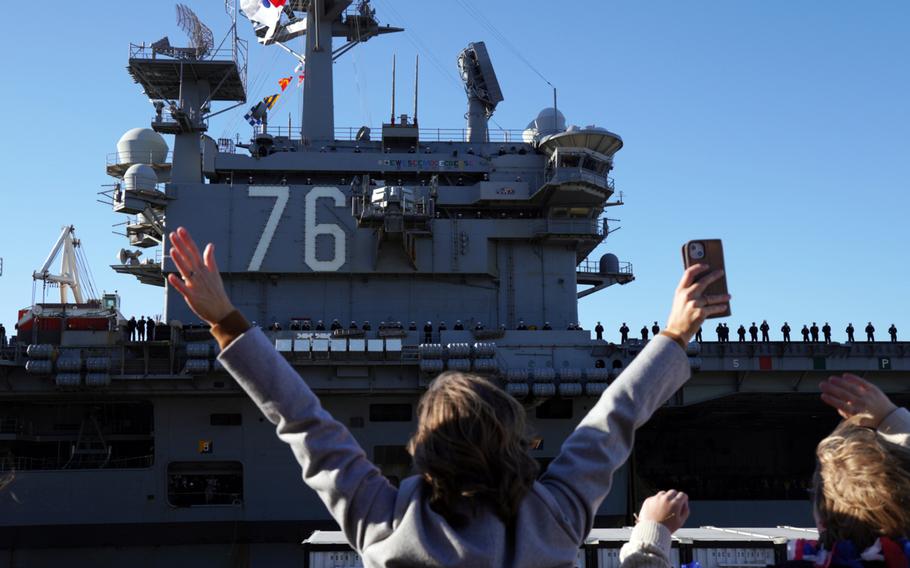 Cheers erupted from the pier and the ship around 11 a.m. as the Ronald Reagan made its final docking procedures.

“As you can see, the crew is very excited to get back home to reunite with family and friends after more than six months at sea,” Cardone added.

The Ronald Reagan arrived without the aircraft of Carrier Air Wing 5 and its roughly 300 personnel, which returned to Naval Air Facility Atsugi and Marine Corps Air Station Iwakuni between Dec. 9 and 15.

During its patrol, the Ronald Reagan repeatedly worked alongside allied nations, including Japan, South Korea, Australia and the United Kingdom, according to Rear Adm. Michael Donnelly, commander of Carrier Strike Group 5.

“These combined operations and exercises show our common integration and our combined commitment and resolve to maintaining a free and open international order in the Indo-Pacific,” he said at the news conference.

The second half of the Ronald Reagan’s patrol involved frequent responses to actions by North Korea, which has test-launched a record number of ballistic missiles this year. The carrier steered into the Sea of Japan, also known as the East Sea, in early October after the communist regime fired an intermediate-range ballistic missile over Japan. 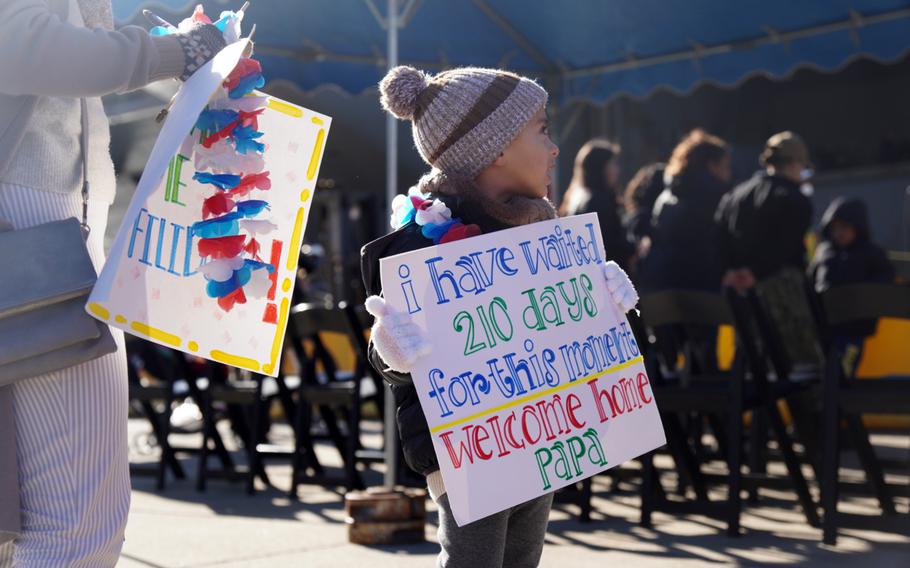 Donnelly praised the U.S., Japan and South Korea partnership and said the exercises served as an example of “our credible combat capability.”

Last month, the Ronald Reagan participated in Exercise Malabar alongside Japan, India and Australia in the Philippine Sea. The four, known as the Quadrilateral Security Dialogue, or Quad, is an informal group regarded as a strategic buffer against China’s military expansion.

Amid Malabar, the Ronald Reagan also took part in the U.S.-Japan exercise Keen Sword, which concluded Nov. 18 and involved 26,000 Japanese and 10,000 American troops, 30 warships and 370 aircraft.

On the pier, 7-year-old Spencer Stevens, of Shawnee, Okla., was feeling impatient waiting for his father, Lt. William Spencer, to disembark and said he wished he was able to send a walkie talkie with him on deployments.

“I’m really excited to see him,” he told Stars and Stripes.

For Melissa Rognlie, 40, of Janesville, Wis., Friday marked a special occasion. Not only was she selected for the honor of “first kiss,” the deployment was the last for her husband, Cmdr. Aleron Rognlie, 44.

“This is actually my husband's last homecoming in his career,” she told Stars and Stripes.

As a reactor officer, Commander Rognlie typically doesn’t participate in the homecoming celebration.

“My husband is usually one of the last off the ship,” his wife said. “So, in this case, he’s one of the first off. He has to go back to work, but it’ll be just great seeing him before the sun goes down.” 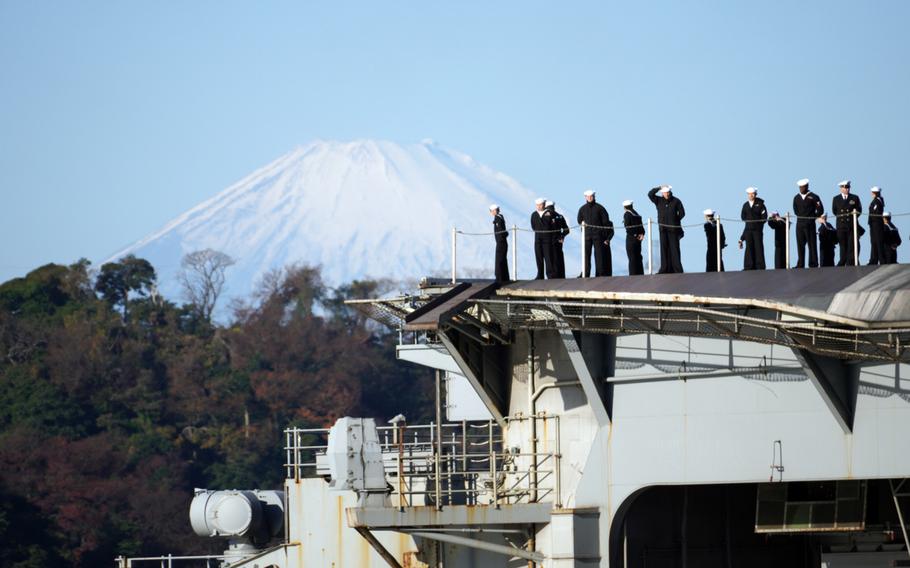