Congress funds military infrastructure projects in Hawaii and the Pacific 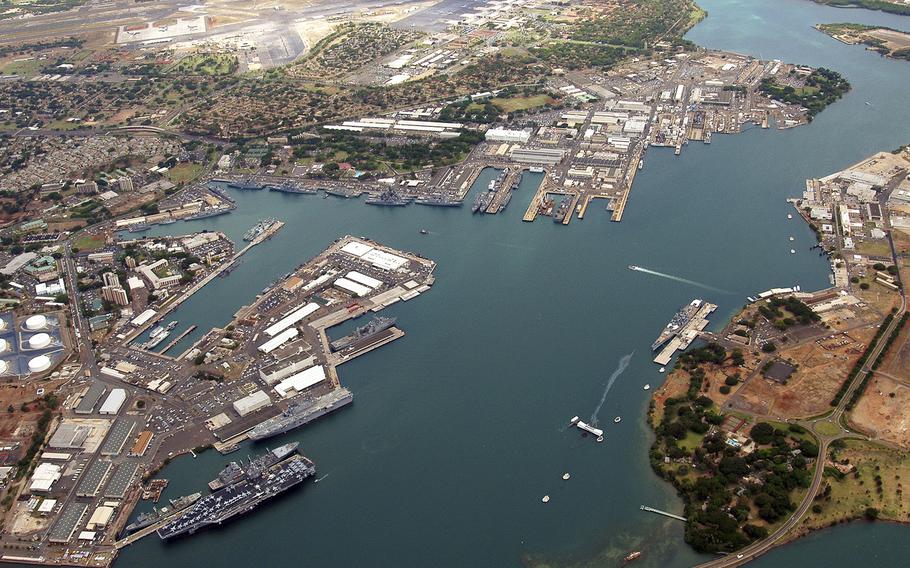 Joint Base Pearl Harbor-Hickam is seen from the air. (Facebook)

(Tribune News Service) — The massive $1.7 trillion congressional omnibus spending bill signed into law Thursday by President Joe Biden contains billions of dollars in support of military infrastructure and diplomatic initiatives in Hawaii and the Pacific as the U.S. seeks to compete with China for influence in the region.

"This measure strengthens our national defense and bolsters our commitments to diplomacy, development and democracy throughout the Indo-Pacific, where the future of our country and world is being determined," said U.S. Rep. Ed Case, who pushed for the inclusion of many of the provisions. "It also recognizes Hawaii's continued critical role through investments in facilities, personnel and institutions that are integral parts of our overall efforts, in addition to major contributors to our local economy."

Projects that will be funded include $87.9 million for a new barracks on Marine Corps Base Hawaii; $103 million for upgrading the missile storage facilities at Joint Base Pearl Harbor-­Hickam; $111 million for a new company operations facility on Schofield Barracks; and $29 million for the planned Army National Guard Readiness Center in Kapolei.

Over the past year, tensions have boiled in the Pacific as China clashes with neighbors over maritime territorial and navigation rights, while military activity has increased around Taiwan, a self-ruled island that Beijing considers a rogue territory and has vowed to bring under its control by any means. The U.S. military, for its part, has continuously conducted "freedom of navigation" operations in disputed territories and stepped up support of Taiwan, further stoking tensions with China.

The bill includes funding for two SSN-774 Virginia class attack submarines that are expected to conduct operations in the Pacific and receive maintenance at Pearl Harbor Naval Shipyard. The Navy is in the process of building a new $3.5 billion dry dock at the shipyard to service new submarines, which also received $621 million in funding from the bill. The shipyard, which employs about 6, 000 people, is the state's largest industrial employer.

Last year was also a historic year for North Korean missile tests. The country launched more than 90 cruise and ballistic missiles throughout 2022 — including three final ballistic missiles launched on New Year's Eve. North Korea's missile program and Hawaii's potential vulnerability to attack has been a source of discussion in the islands ever since a 2018 false missile alert amid heightened tensions between Washington and Pyongyang.

The bill includes $164 million for the continued operation of the X-Band Radar, a sea-based missile defense radar known to some Hawaii residents as the "golf ball" because of its large, white-domed appearance. The radar moves between Alaska and Hawaii.

The Hawaii congressional delegation has pushed for beefed-up missile defense for the islands. For years Hawaii lawmakers pinned their hopes on the $1.9 billion Homeland Defense Radar-Hawaii, a costly and controversial program that the congressional delegation fought to fund despite efforts by the Pentagon under the Trump and Biden administrations to zero out funding.

The project was touted as an opportunity to boost Hawaii's economy with defense dollars and keep the islands safe, but received backlash from residents who argued the costly program would take up space and threaten irreplaceable wildlife habitats and Hawaiian cultural sites. Some critics also argued that the proposed system was unable to detect the latest hypersonic weapons used by China and Russia, and would be rendered redundant by the time it was finished by more efficient space-based systems.

This year the congressional delegation finally stopped pushing the funding for the defense homeland radar, but the bill also calls for an assessment of what should be done to protect Hawaii — which some analysts say could be hit within 20 minutes of a North Korean long-range missile launch. The omnibus also includes $393.2 million to fund missile defense in Guam, which falls within range of a wider variety of Chinese and North Korean weapon systems than Hawaii.

The bill adds an additional $1 billion toward the defueling and eventual shutdown of the Navy's underground Red Hill fuel facility that in 2021 caused the contamination of the Navy's water system that serves 93,000 people on Oahu and sits just 100 feet above a critical aquifer that most of Honolulu relies on for clean water. It also includes a provision directing that the secretary of defense work with the state government to address the growing chasm between military leaders and surrounding communities.

"The military must foster a better relationship with our local community to repair the damaged trust of Red Hill and rebuild support for various critical defense initiatives in our state," Case said.

The bill also calls for $317 million for environmental restoration of "formerly used defense sites" across the country, including funds intended to accelerate efforts to remove unexploded ordnance and discarded military munitions in Hawaii. Progress has been slow, and an investigation by the Honolulu Star-Advertiser and ProPublica published in November found that the effort in Hawaii, overseen by the U.S. Army Corps of Engineers, has been plagued by shoddy work and multiple regulatory disputes.

Beyond military spending, the omnibus also seeks to beef up funding for dialogue, diplomacy and development in the region with an eye toward promoting U.S. interests.

The bill includes $22 million in funding for the East-West Center at the University of Hawaii at Manoa. The Hawaii congressional delegation has sought to play up the importance of the Oahu think tank — which was formally established by Congress in 1960 — as their fellow lawmakers express renewed interest in Pacific island nations.

China has been investing heavily in the Pacific islands with business and infrastructure projects, and poured money into cultural and education programs to court influence with political and business leaders as well as students and educators in those countries.

The omnibus includes language encouraging the U.S. State Department to increase the number of scholarships available for students from Pacific island countries to study in the United States — many of whom chose to study at the University of Hawaii — and increases funding for the State Department's Young Pacific Leaders Program, an initiative for emerging leaders between the ages of 25 and 35 hailing from Hawaii, Guam, American Samoa, Commonwealth of the Northern Mariana Islands, Tonga, Fiji, Solomon Islands and other Pacific nations and territories.

The measure also includes a $20 million increase over the past fiscal year for the Peace Corps, bringing it up to $430.5 million, along with language encouraging the Peace Corps to prioritize the Pacific islands in the return of volunteers. Under former President Donald Trump, the Peace Corps announced it would leave Palau and the Federated States of Micronesia, which have both since signed agreements to host new U.S. military facilities.

As Chinese investment and influence has grown in Oceania, U.S. officials have been trying to play catch-up. In a virtual address to the Pacific Islands Forum in July, Vice President Kamala Harris announced new investments in the Pacific, including new embassies in Kiribati and the Solomon Islands — two countries where China has made particular gains.

It also recommends expanding the State Department's International Law Enforcement Academy program to the Pacific islands. The program, which was launched in 1995 by former President Bill Clinton to bring law enforcement professionals together to share knowledge and tactics, currently has academies in New Mexico, El Salvador, Hungary, Thailand, Botswana and Ghana.

But as the U.S. and China jockey for influence, many Pacific island nation leaders have said that climate change is their biggest concern.

The omnibus includes $2 billion in its state and foreign operations section for addressing climate change and other environmental programs, and has language recommending $20 million or more to support the Pacific islands. Despite efforts by Pacific Islanders to weather the storm, entire communities already have been finding themselves forced to move by rising tides, and many islands and atolls in the Pacific risk being swallowed by the sea by the end of the century.