Navy says Red Hill cameras may not be operable for defueling 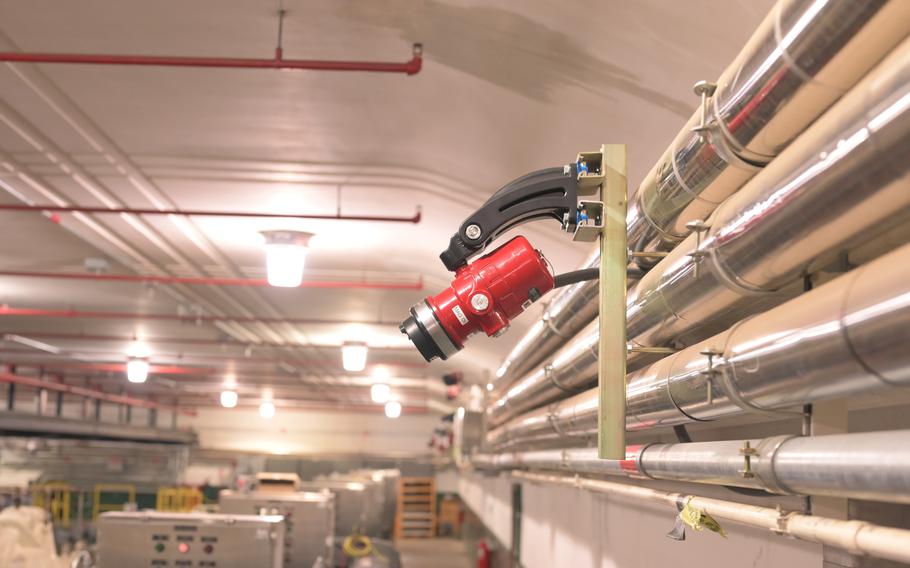 The surveillance camera system at Red Hill hasn’t been fully operational for at least two years. Pictured is one of the facility’s fire detection cameras. (Daniel Mayberry/U.S. Navy)

(Tribune News Service) — The Navy says that repairs to its video surveillance system at Red Hill, where seven out of 37 cameras remain broken, may not be completed before it begins draining all 104 million gallons of fuel from its underground tanks, which is slated to begin in February 2024 and take four months.

The camera system hasn’t been fully operational for at least two years.

The lengthy timeline for repairs means that if there is a fuel spill or other accident at Red Hill — as occurred last month when approximately 1,300 gallons of toxic fire suppression chemicals spewed from a pipe — there’s a higher likelihood it won’t be caught by the Navy’s surveillance system and that footage won’t be available for regulators to review.

To compensate, the Navy says it will add more workers to keep watch over the facility once it begins draining the tanks.

“The surveillance cameras installed act to enhance the operators’ ability to view the tanks, pipeline and equipment,“ said a Navy spokesperson by email. “In essence the cameras act as a staff multiplier to alleviate the need to have as many observers when doing fueling operations. When Joint Task Force-Red Hill commences defueling, critical areas that are not visible due to inoperable cameras will be manned by observers and operators.”

Naval Information Warfare Center, a Navy entity, was hired to do maintenance and repairs on the system under a contract worth up to $4 million. Its subcontractor, Integrated Security Technologies, has been doing most of the work. The biggest challenge has been global supply chain shortages for camera parts, the Navy said. Military officials estimate it could take six to 18 months or more to fix all of the cameras.

“As with all equipment that have chips or electronic components, there are global shortages that impact availability,“ the Navy said by email. “This is a legacy system, with a number of the parts that are no longer being produced.”

The Navy said a “functional alternative solution needs to be identified and developed for many of the non-operational cameras “ and that new fiber-optic cables will need to be run, adding additional time. Wireless cameras are not an option, the Navy said, due to security vulnerabilities.

Hawaii Sierra Club Director Wayne Tanaka said he was confused as to why it would take the Navy so long to fix its video cameras.

“It doesn’t make sense that it would take 18 months to procure seven cameras. I can go online and order a closed-circuit television system right now with free shipping,“ he said. “Something is off.”

THE NAVY’S faulty video surveillance system has been a source of frustration for local officials since a fuel spill at the Red Hill facility contaminated the Navy’s drinking water system serving Joint Base Pearl Harbor-­Hickam and surrounding neighborhoods in November 2021, sickening hundreds of military families.

The Pentagon subsequently ordered the World War II-era facility to be permanently shut down amid a barrage of public criticism. The Navy has been working on extensive repairs to the pipelines and other infrastructure to ensure the defueling can be done safely.

Neither of the two fuel spills at Red Hill in 2021 that led to the water contamination crisis were recorded by the surveillance system due to broken cameras, according to the Navy, contributing to confusion about what had occurred.

On May 6, 2021, pressure surged through piping at Red Hill, rupturing two joints and blowing off a 500-pound, 6-foot section of pipe. Fuel came gushing out, began filing a room, overtopped a bulkhead door and flowed down into a tunnel. At the time, all of the video cameras at Red Hill were down, the Navy would later say, and there was no video footage showing what happened.

Months later, in October 2021, the Navy concluded that about 1, 600 gallons of fuel had been released and all but 38 gallons was cleaned up. That conclusion was perilously wrong.

About 20, 000 gallons of fuel had actually spilled from the pipe. Most of it was sucked up into a fire-suppression pipeline unbeknownst to the Navy. That pipe ruptured Nov. 20, 2021, when it was hit by a trolley cart. All of the cameras at Red Hill were still down at that time, the Navy said, and there was no surveillance footage showing the accident. (Six months later, footage shot with a personal mobile device surfaced and was published by Honolulu Civil Beat.)

In the days following the November 2021 pipe rupture, military families on the Navy’s drinking water system began getting sick with nausea, vomiting, diarrhea, skin rashes and chemical burns. By early December, the Navy confirmed the spilled fuel had migrated into its Red Hill shaft, polluting its drinking water system and poisoning families.

The Navy’s camera problem was revealed publicly by Hawaii U.S. Rep. Kai Kahele. In February, he told the Honolulu Star-Advertiser that the fuel facility was lined with closed-circuit television cameras, two of which were perfectly positioned to record both the May and November spills.

Kahele said that when he asked the Navy for the footage, he was told it didn’t exist and that the cameras had been inoperable since January 2021 after a contractor inadvertently severed a cable that provides power to 44 out of the 57 cameras.

“I couldn’t believe that answer, first of all,“ Kahele told the Star-Advertiser’s “Spotlight Hawaii “ in February. “I find it totally unacceptable. This is February of 2022 and the camera system went down 13 months ago. Why isn’t it fixed ? Why wasn’t it fixed by May, six months later ?”

The camera fiasco became part of the Navy’s investigation into the water contamination, the findings of which were released at the end of June.

The report explained that none of the cameras at Red Hill were working and that the 13 cameras that were operating were in other areas of fueling operations at Joint Base Pearl-Harbor Hickam. The investigation blamed a communications breakdown for the cameras not being fixed.

In January 2021, after recognizing there were problems with its camera system, Fleet Logistics Center Pearl Harbor routed a request to the Defense Logistics Agency to fund a replacement system, according to the investigation report. Although DLA approved a request to fund a replacement system prior to the May 2021 spill, “a miscommunication resulted in FLC PH being erroneously informed that the CCTV system would not be funded,“ according to the Navy investigation. The Fleet Logistics Center Pearl Harbor “did not elevate that disapproval notification for resolution,“ and it wasn’t until January 2022 that the Defense Logistics Agency “resolved the communication breakdown“ and committed to funding a replacement system.

After the investigation was released in June, a Navy official told the Star-Advertiser that all of the cameras had since been fixed. But it quickly became clear that wasn’t the case when 1, 300 gallons of a fire suppression chemical, known as aqueous film forming foam, spewed from a pipeline Nov. 29 as workers were trying to repair Red Hill’s fire-protection system.

After initially telling the media there were no cameras in the vicinity of the spill and no footage, the Navy said there actually was footage from one camera and that another nearby camera was broken. The Navy has refused to release that footage to the public, citing its ongoing investigation into the spill.

Tanaka of the Sierra Club said that maintaining a working camera system and releasing the footage publicly could help the Navy build public trust that has been eroded by its handling of Red Hill.

“At this point, given the lack of candor and transparency, I think objective mechanisms to know the truth, like cameras, would be especially critical, even from the Navy’s perspective,“ he said. “They want to build trust. I would think that they would want to be able to provide objective, factual information like video recordings.”