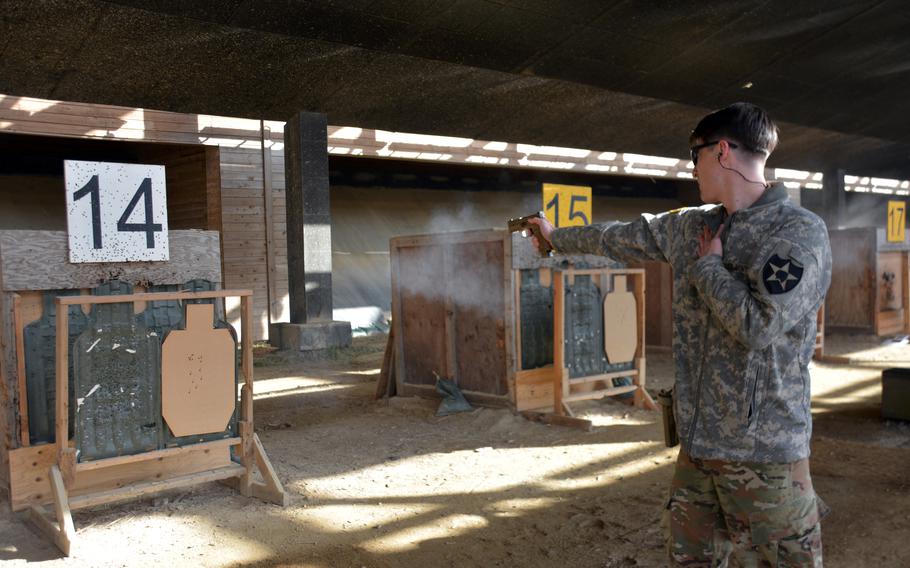 CAMP HUMPHREYS, South Korea — Military pistoleers combined a Christmas toy drive with a chance to earn a rare Danish Marksmanship Badge on a cold Monday morning at the rifle pistol range on this U.S. Army base.

About 40 troops from U.S. and South Korean units paid the entry fee — a toy for the Jacob’s House orphanage in Pyeongtaek or for service members’ children at Camp Humphreys — to display their proficiency with a Sig Sauer M18, the official U.S. Army sidearm.

U.S. Special Operations Command-Korea hosted the event for the first time in South Korea as part of Operation Toy Drop-Korea, a four-day charity event. Operation Toy Drop was first established in 1998 at Fort Bragg, N.C., to collect donated gifts for families in need and permit service members an opportunity to earn foreign military badges, according to a news release from the command. “I think it’s a really great opportunity to see some of the other side of our allies and our counterparts,” Wood said. “It’s my first time seeing all this stuff, so it’s pretty good to see that I’ve made it.”

Danish Army Maj. Soeren Madsen of the U.N. Command oversaw the event and awarded badges to those who qualified. The chance to earn a Danish Marksmanship Badge is rare outside of Denmark and comes only once a year, Madsen said.

Danish marksmanship tests are designed so that about half of the participants earn a badge; roughly 16% of all participants will earn a silver badge and 5% will earn a gold badge, according to Madsen.

The turnout was “much more than I expected” and the statistics of the competition so far are “holding up,” he said.

Roughly 100 service members are scheduled to participate in Operation Toy Drop-Korea’s Norwegian foot march at Humphreys on Wednesday. Troops who complete the 18.6-mile march with a 25-pound ruck sack in under 4 hours and 30 minutes will earn a Norwegian Foot March Badge. No toy donation is required to participate.

“We have service members across the peninsula, not just in special operations, who volunteered their time to train and to work alongside [South Korean] and U.N. Command teammates for this weeklong event,” Army Lt. Col. Joshua Bauer of U.S. Special Operations Command-Korea said in a news release Monday. “We are looking forward to seeing what everyone accomplishes this week …”