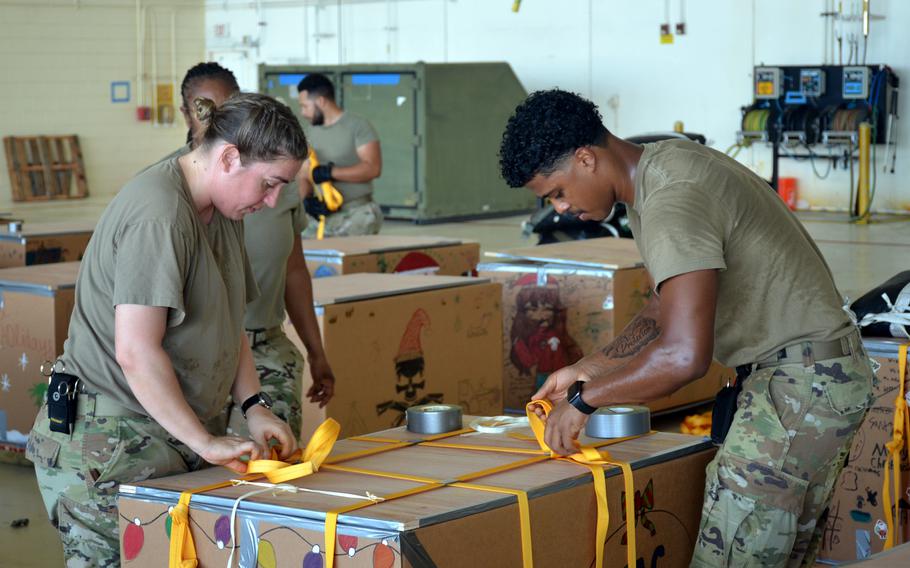 Representatives from six nations gathered for a “push off” ceremony for the 71st annual Operation Christmas Drop, a weeklong mission to air drop essential supplies to far flung and isolated islands of the Federated States of Micronesia and Republic of Palau.

From Andersen, participating airlifters will fly an expanse of ocean equal in size to the continental United States.

The group this year includes the 374th Airlift Wing from Yokota Air Base, the 36th Wing at Andersen and the 15th Wing from Joint Base Pearl Harbor-Hickam, Hawaii. Partner nations are the Japan Air Self-Defense Force, Royal Australian Air Force, Royal New Zealand Air Force and the South Korean and Indian air forces, according to a Pacific Air Forces news release.

Senior Airman Gordon Massett, 26, of Boise, Idaho, a C-130 loadmaster with the Yokota-based 36th Airlift Squadron, is taking part in Operation Christmas Drop for the first time. After days of practice, he made his first actual drop Monday, he said.

“It’s my first time here, and it’s a blast,” he said after the ceremony. “It’s really fun to be working with all of our international partners and supporting the islanders with supplies.” 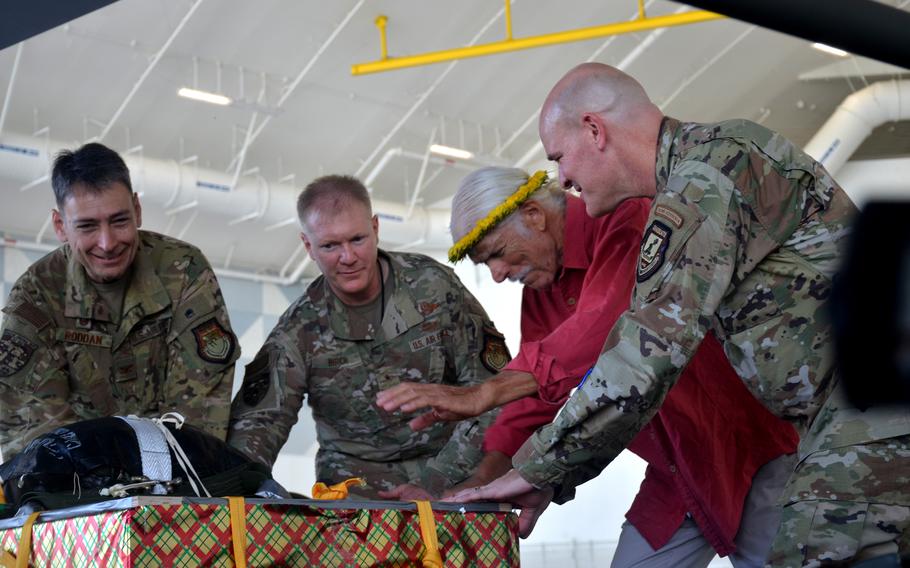 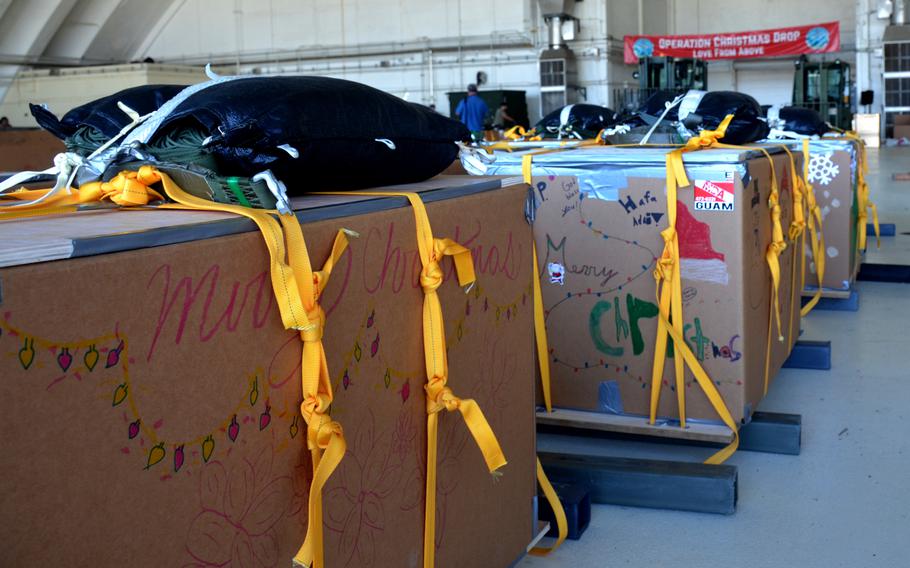 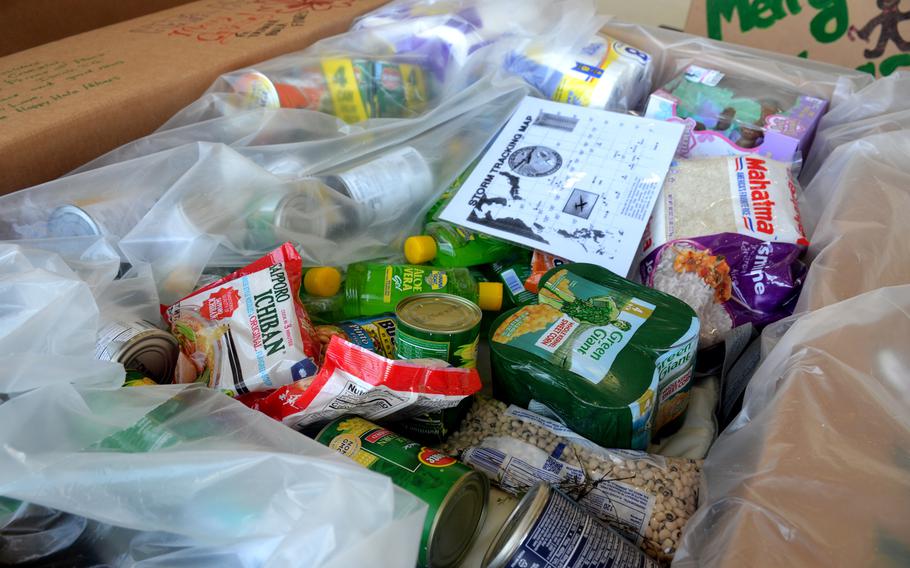 An Operation Christmas Drop bundle is filled with supplies inside a hangar at Andersen Air Force Base, Guam, Monday, Dec. 5, 2022. (Alex Wilson/Stars and Stripes) 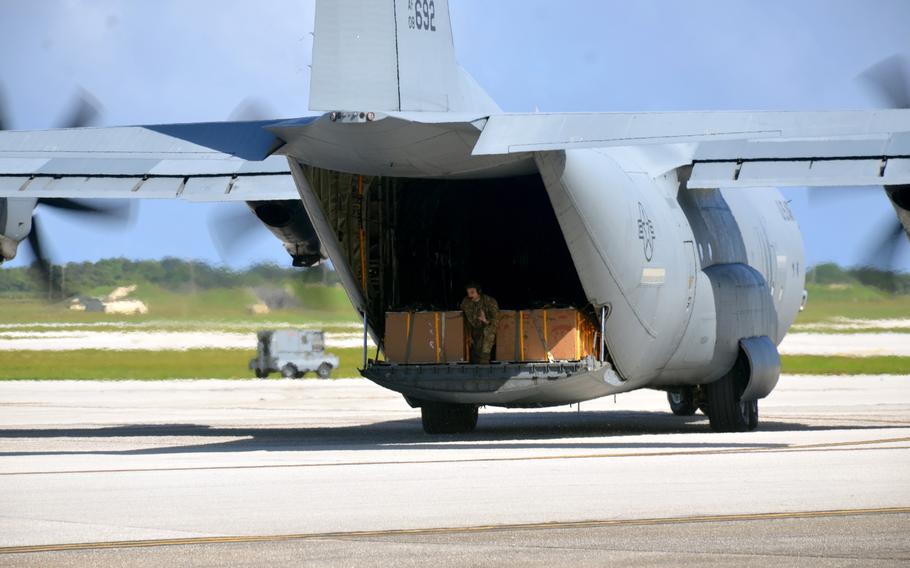 A C-130J Super Hercules from the 374th Airlift Wing at Yokota Air Base in Tokyo takes part in the annual "push off" ceremony for Operation Christmas Drop at Andersen Air Force Base, Guam, Monday, Dec. 5, 2022. (Alex Wilson/Stars and Stripes)

About 200 people gathered in a cavernous hangar on Andersen’s flight line as guest speakers loaded one of the many outbound supply crates onto a C-130J Super Hercules as part of the ceremonial start.

Bruce Best, also known as “Brother Bruce,” a Guam-based telecommunications expert who has participated in the event for decades, also spoke during the “push off,” and called the volunteers and participants the “heart and soul” of the mission.

International partners in the annual drop stayed on the sidelines in the pandemic years 2020 and 2021, for the most part. The Japan Air Self-Defense Force joined the Air Force in 2020 and 2021; South Korea participated in 2021 for the first time.

This year, air crews from Australia and New Zealand, who last flew with Operation Christmas Drop in 2019, returned, along with India, according to Lt. Col. Kira Coffey, commander of the 36th Airlift Squadron. Another 18 observers from 10 countries from across the Pacific and elsewhere are also in attendance, she said.

“The goal is obviously, at some point, for them to be able to join us in this operation and continue to build those partnerships across the world,” the Columbia, Mo., native told Stars and Stripes after the ceremony.

More partners do not translate into more air drops, but they do mean a more efficient operation, Coffey added. 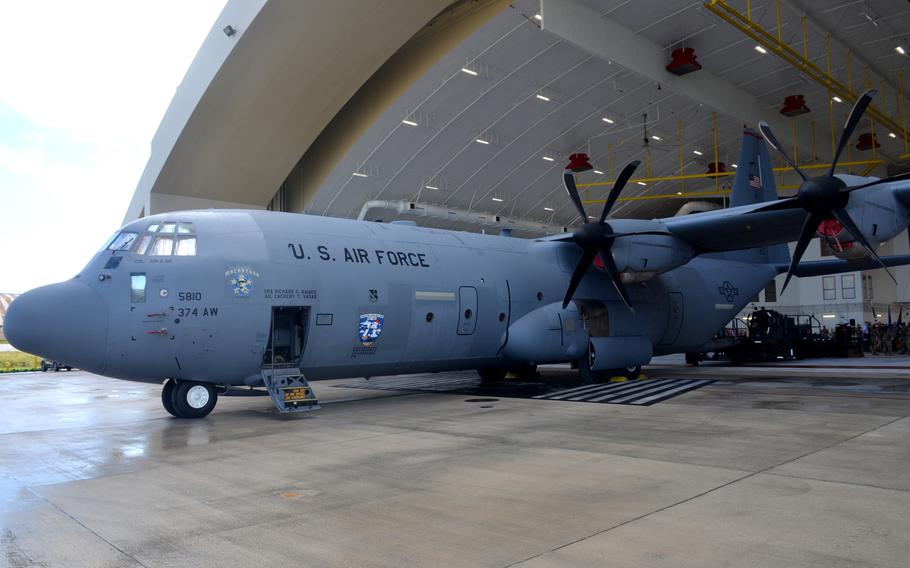 A C-130J Super Hercules from the 374th Airlift Wing at Yokota Air Base in Tokyo takes part in the annual "push off" ceremony for Operation Christmas Drop at Andersen Air Force Base, Guam, Monday, Dec. 5, 2022. (Alex Wilson/Stars and Stripes)

In a second hangar, scores of supply-laden crates bore cheerful, handmade messages and holiday graphics on their exteriors, the work of volunteers. Each box carried a standardized set of supplies that included everything from first aid kits to fishing equipment.

The supplies are tailored to sustaining life in a remote location. The 400- to 600-pound bundles are the same size and weight as supplies that airlifters might parachute to combat troops in the field.

The top 6 inches of each crate is filled with items sometimes selected by Christmas Drop volunteers. One was topped off with packages of instant ramen, bottles of aloe vera gel, canned goods and a doll.

Massett, the loadmaster, also offered something.

“My message is just going to be ‘Merry Christmas,’ he said. “Seeing from their perspective, I think this is a real big thing, a real big help.”