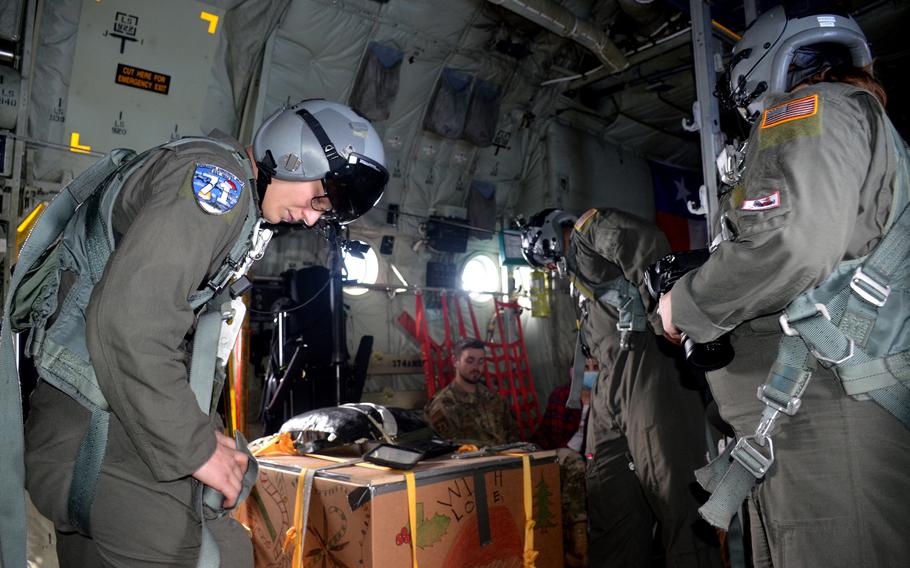 ANDERSEN AIR FORCE BASE, Guam — Three crates brimming with essential supplies for island life fell swiftly over the Pacific Ocean from the back of a cargo plane Wednesday until small parachutes blossomed to slow their descent.

Its four powerful engines roared as the C-130J Super Hercules from the 374th Airlift Wing at Yokota Air Base, Japan, circled 300 feet above Eauripik, a lonely speck in a vast sea about 500 miles south of Guam.

The drop was one of two the crew made that day, delivering seven crates to two atolls as part of the 71st annual Operation Christmas Drop, which delivers humanitarian aid to the small, nearly inaccessible islands of Oceania.

The U.S. Air Force leads the way on Operation Christmas Drop and was joined this year by air force crews and aircraft from Japan, South Korea, Australia, New Zealand and India. Ten other nations, including the United Kingdom, Germany, Indonesia and Malaysia, sent observers to see the missions in action.

The operation kicked off Dec. 2 and ends Friday, during which air crews will fly approximately 35 sorties and make 200 drops to 57 islands, a spokesman for the 374th Airlift Wing, 1st Lt. Danny Rangel, told Stars and Stripes on Wednesday. Those drops deliver more than 60,000 pounds — 30 tons — in total.

Inside each 2-by-2.4-by-3-foot crate are myriad provisions for the remote islands’ inhabitants: food, water, medical supplies, fishing gear and amenities such as clothing and toys. 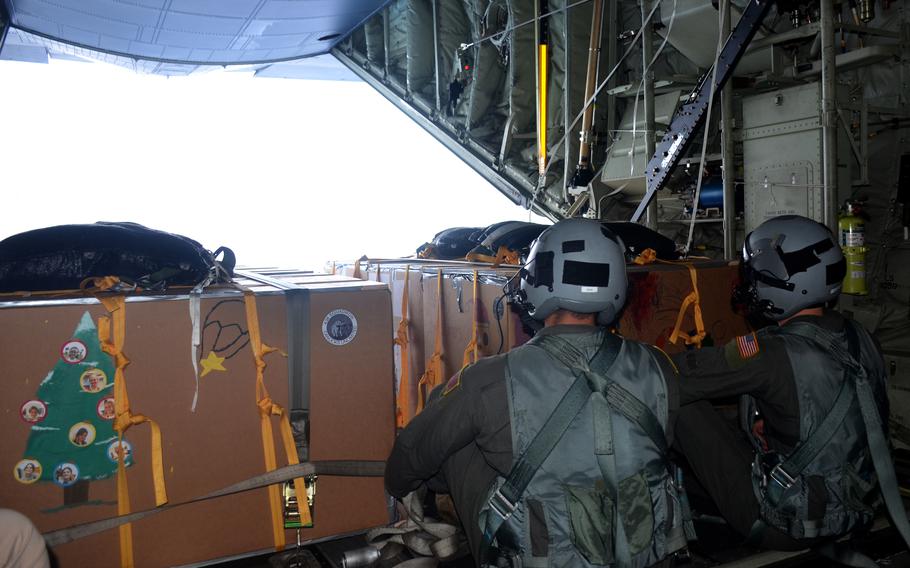 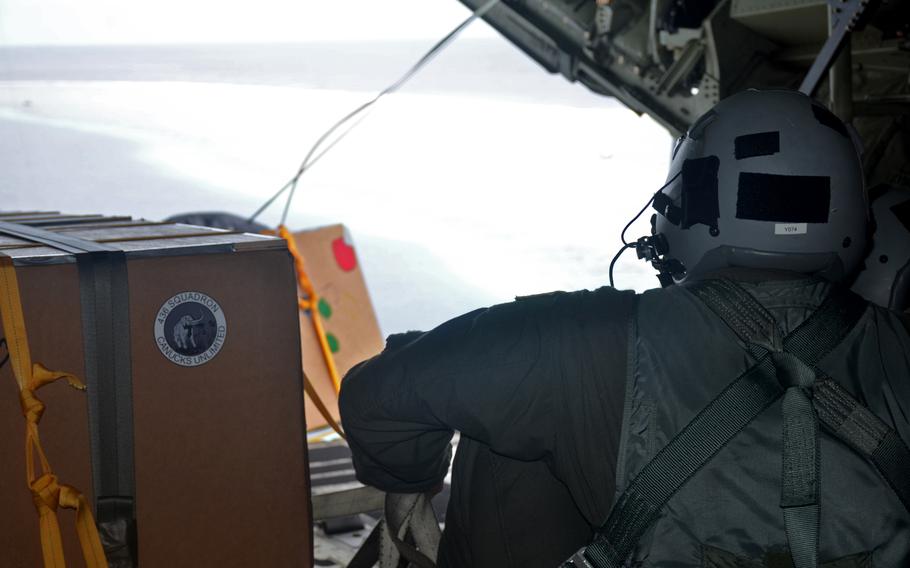 A crate filled with donated Operation Christmas Drop supplies begins its descent toward the Eauripik islands in the Federated States of Micronesia, Wednesday, Dec. 7, 2022. (Alex Wilson/Stars and Stripes)

The chance to participate in Operation Christmas Drop, and the knowledge that it delivers such essentials, is second to none, according to Capt. Andrew Zaldivar, 31, a C-130 instructor pilot from Yokota.

“It is one of the most incredible experiences in my life,” the native of Hockessin, Del., said during media interviews Wednesday. “I tell everybody that this is the best thing I’ve ever done in the Air Force, hands down.”

As the mission commander this year, Zaldivar manages all Christmas Drop flying operations. He also flew missions in 2021, when fewer islanders and partner nations participated because of the COVID-19 pandemic.

“Last year, they requested we take some serious COVID mitigations; this year, that was not requested,” he told Stars and Stripes before Wednesday’s flight. “So, it’s really, really nice seeing everything kind of open up again, and just getting back to something that we’re a little bit more used to.”

Throughout the flight, the international observers watched the delivery process and despite the roar of aircraft engines, discussed among themselves how they might participate in future operations.

The chance to take part is “very important,” said Maj. Corey Gallagher of the Royal Canadian Air Force. He explained that he was there to evaluate how Canadian procedures compare with those of Operation Christmas Drop.

“If we are invited to come and participate with an aircraft, we will be ready to come through and execute the operation with our allies,” he said during the flight. “Obviously, the Indo-Pacific region is important to Canada as well because we’re a Pacific nation also.”

Working with international partners is a benefit of the operation, Zaldivar said, but the primary benefit is the relief it delivers to the islanders.

“This operation, it’s all about these people that we get to help,” he said.

After dropping the crates onto Eauripik, the aircraft circled around to confirm the supplies were delivered and to wave to roughly a dozen islanders who rushed to the shore to signal their gratitude.

The pilots, along with the airmen responsible for dropping the crates, returned the gestures, holding up hand signs for “peace” and “hang loose.”

Moments like that are part of the magic of Christmas Drop, said Staff Sgt. Kembria Mims, an aviation resource manager with the 374th Airlift Wing.

“It almost brings tears to my eyes when I see them waving back at us and just knowing the impact you’ve had on these islands,” Mims, 23, of Augusta, Ga., told Stars and Stripes before the Wednesday’s flight. 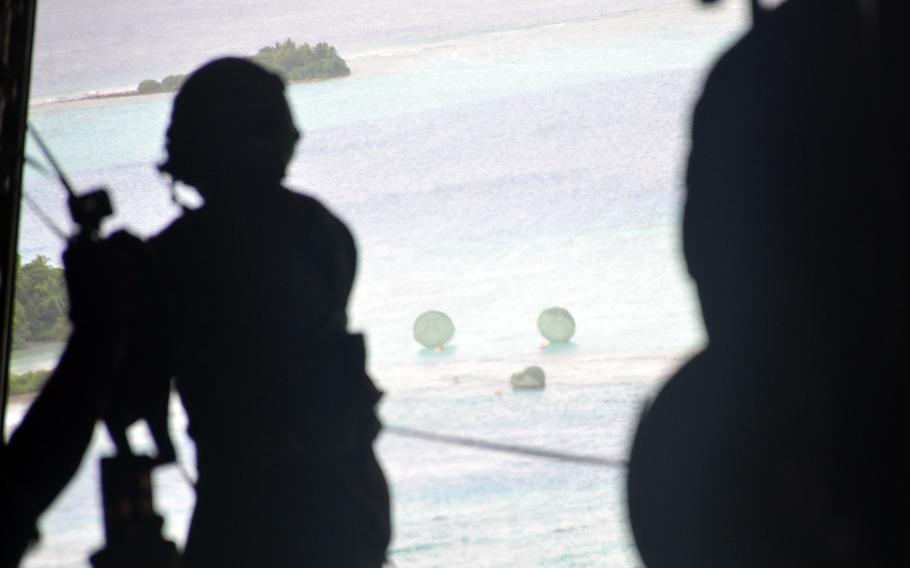 Crates filled with Operation Christmas Drop donations are parachuted from an Air Force C-130J Super Hercules toward the Eauripik islands in the Federated States of Micronesia, Wednesday, Dec. 7, 2022. (Alex Wilson/Stars and Stripes) 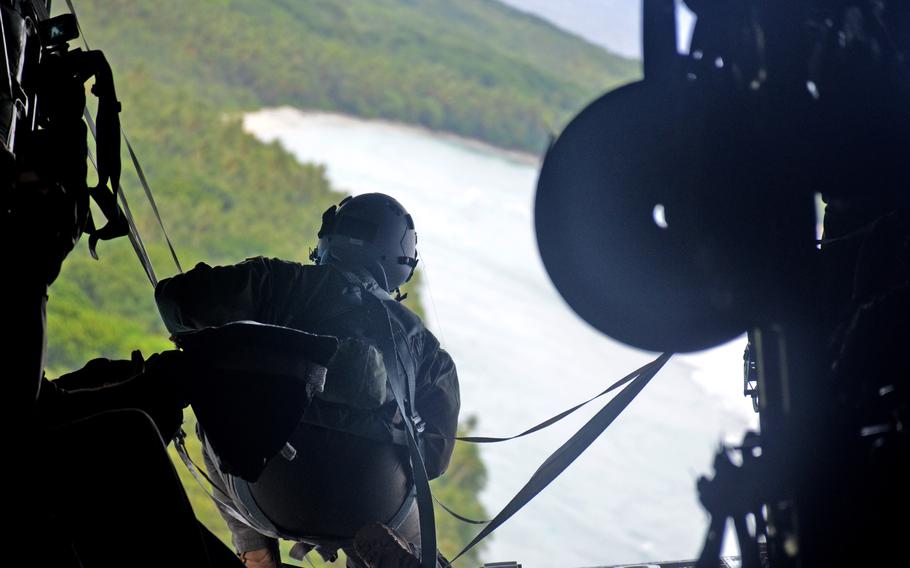 A C-130J Super Hercules crewmember confirms that crates filled with Operation Christmas Drop supplies were delivered to islanders in the Federated States of Micronesia, Wednesday, Dec. 7, 2022. (Alex Wilson/Stars and Stripes) Eauripik, one of 607 islands in the Federated States of Micronesia, consists of three coral atolls with a population in 2021 of 114, according to the U.S. Department of Health and Human Services.

The Super Hercules crew continued to Ifalik, four atolls 433 miles south of Guam and home to 593 people. There, the crew dropped four crates and waved just as enthusiastically as they did over Eauripik.

“It just sends chills all over,” Zaldivar said. “It’s one of the most special things in the world.”