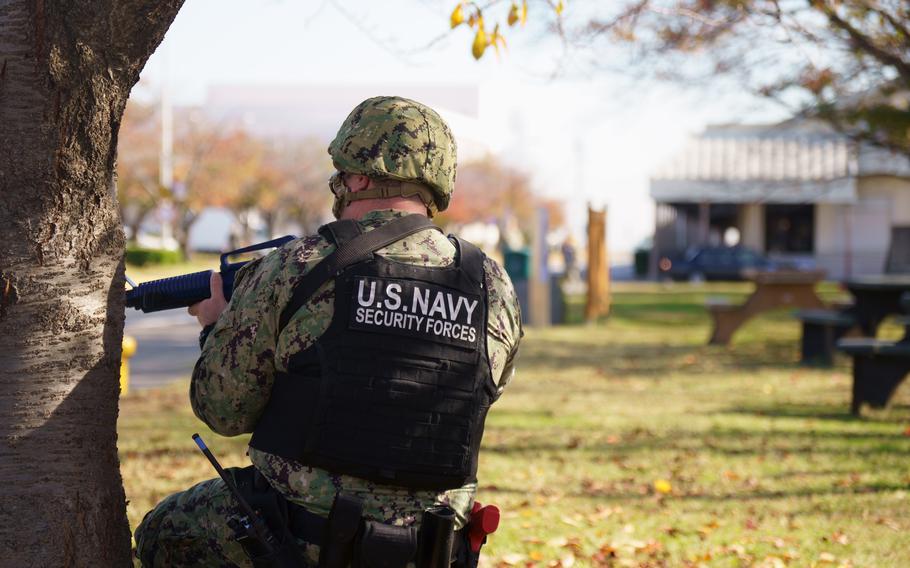 A U.S. Navy sailor prepares to engage in a mock gun battle during an active shooter drill at Yokosuka Naval Base, Japan, on Nov. 17, 2022. (Akifumi Ishikawa/Stars and Stripes)

YOKOSUKA NAVAL BASE, Japan — Teams of sailors wielding rubber assault rifles stormed a park on this naval base Thursday morning and battled a group of pretend intruders in a mock gun battle, one part of a much larger exercise by the Japan Self-Defense Force and U.S. Navy.

The make-believe gun battle at Kosano Park was part of Keen Sword 23, a nine-day exercise by Japan’s forces and the U.S. military across Japan that takes place every two years. This year’s drills were scheduled to end Saturday.

“Participation of U.S. Naval Forces Japan in Keen Sword 23 was increased in scope, depth and complexity from previous exercises to reflect the increasingly challenging security situation within the region,” said Rear Adm. Carl Lahti, commander of Naval Forces Japan, in a Friday email to Stars and Stripes. “Observations from this exercise will be used to improve our combat effectiveness and hone our operating procedures with our JSDF counterparts.”

Just after the security exercise, a team of sailors responded to a simulated mass casualty event on the opposite side of the park. A series of small boats attempted to infiltrate the eastern shoreline of the base via Tokyo Bay. From the Purdy Gym officers coordinated a voluntary evacuation of military families. 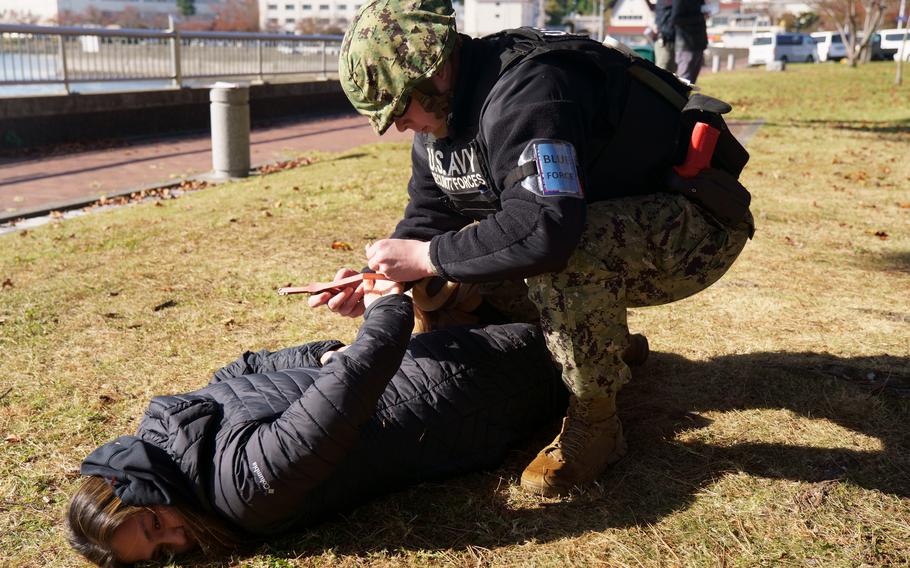 A U.S. Navy sailor apprehends a Kansas City Navy reservist acting as an active shooter during a drill at Yokosuka Naval Base, Japan, on Nov. 17, 2022. (Akifumi Ishikawa/Stars and Strip) 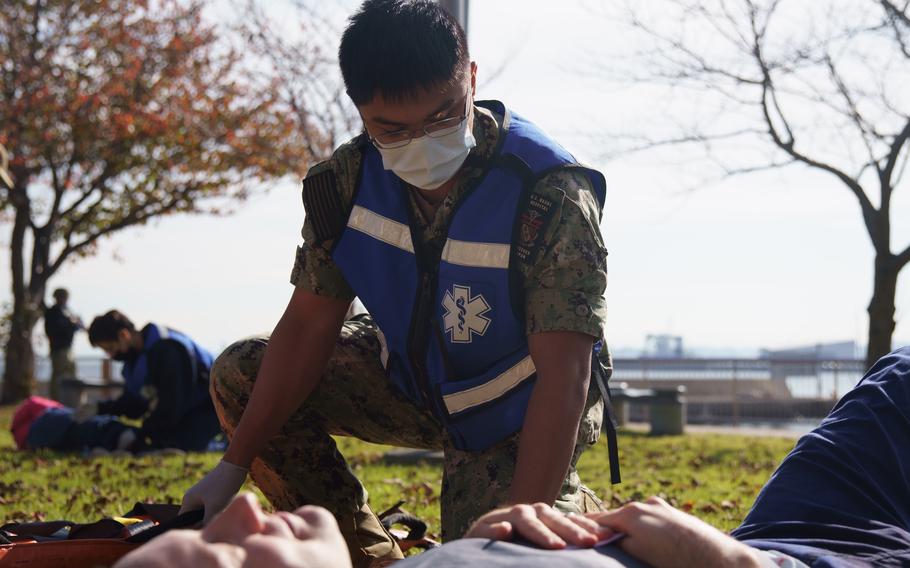 A U.S. Navy sailor tends to a man acting as a victim during a mass casualty drill at Yokosuka Naval Base, Japan, on Nov. 17, 2022. (Akifumi Ishikawa/Stars and Stripes)

“One of the critical lessons learned during the exercise was validating the command’s throughput at its Emergency Evacuation Center,” base commander Capt. Les Sobol told Stars and Stripes by email Thursday. “We practiced our process and procedures and validated our ability to process personnel for a voluntary departure out of the area of operations.”

At the ground level, members of Japan’s Self-Defense Force weren’t always visible; behind the scenes, however, Japanese officers were coordinating with the base’s command through each event, Sobol said.

Working from the Base Defense Operations Center, Japanese and U.S. officers kept an eye on the situation and communicated information up to higher headquarters, according to the base’s antiterrorism officer, Del Boyer.

“We’re trying to make it so that the Japanese military is kind of embedded with what’s going on,” Boyer told Stars and Stripes during Thursday’s drills. “Right now, up in our headquarters, we have the Japan Maritime Self-Defense Force and the Ground Self-Defense Force.”

The exercise also benefits individuals as much as it does high-level commanders. Petty Officer 2nd Class Carlos Prothow, 30, of Houston, who acted in the “opposing force” in the security exercise, experienced the security drill from a different viewpoint.

Prothow, a Navy reservist out of Kansas City, Mo., and several other reservists flew into Japan just for the exercise. He and three others acted as the intruders during the exercise at Kosano Park.

“It’s one thing actually doing the drill yourself but being on the other side and seeing it in action, it gives you that understanding of how capable our forces are,” Prothow told Stars and Stripes after the drill.