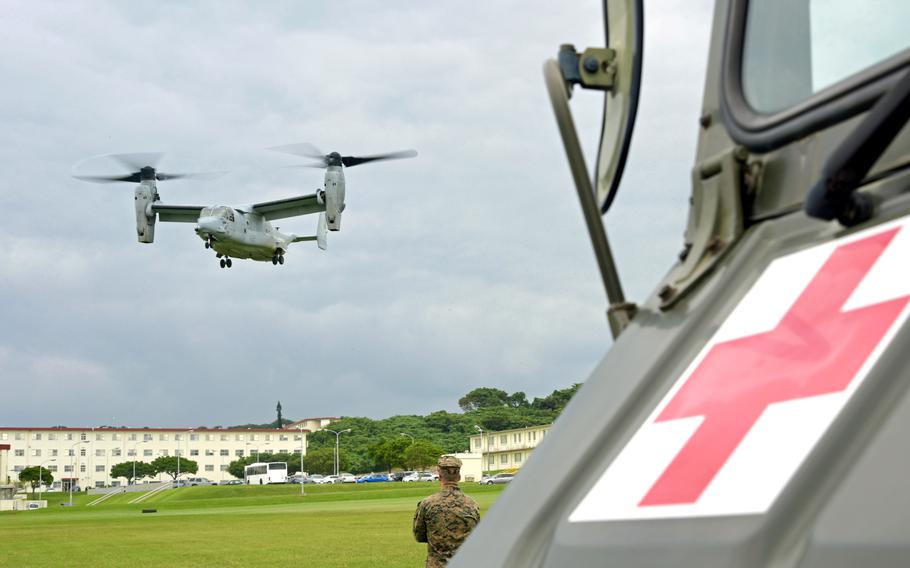 CAMP FOSTER, Okinawa — At an expeditionary medical facility built inside a warehouse on this Marine Corps base, Navy doctors and nurses triaged incoming casualties brought by Osprey tiltrotor aircraft Tuesday from an imagined battle more than 130 miles away.

It was a drill, of course, part of Keen Sword 23, a honing every two years of U.S. and Japanese armed forces’ readiness to fight together. With fighting comes casualties and the medical branch, like the warfighters, rehearses for the job.

The caregivers scanned simulated gunshot, burn and blast victims brought from the Amami Islands to Japan Ground Self-Defense Force ambulances at Camp Foster and then to the expeditionary medical station, also called a Role-3 facility.

“This was an opportunity for us to coordinate with our partners in the region to assess each other’s medical assets and see how we can continue to work forward together on other operations and exercises,” Navy Capt. Stephen Arles, director of Naval Medical Forces Pacific’s maritime operations center, said during a lull in the action. “Exercises like this give us an opportunity to operationalize Navy medicine assets to enhance our readiness in times of conflict and to ensure we have a ready medical force.” 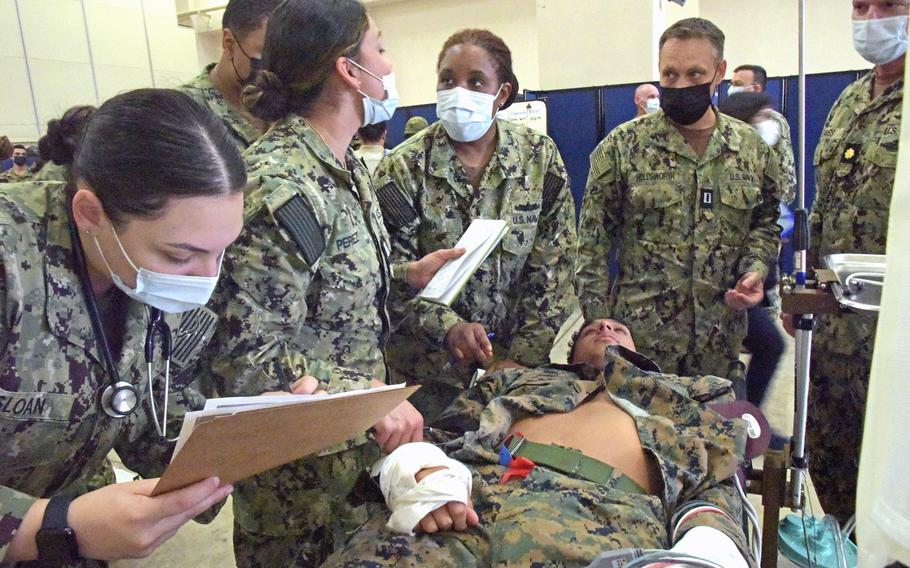 Keen Sword, begun in 1986, is designed to increase combat readiness and improve the working relationship between U.S. and Japanese forces. The exercise this year began Nov. 10 and ends Saturday at bases across main-island Japan, Okinawa prefecture and in Japan’s territorial waters.

A Role-3 expeditionary medical facility, comparable to a hospital ship, was staffed Tuesday by sailors from Naval Medical Forces Pacific at Naval Base San Diego and Expeditionary Medical Facility 150-Alpha at Camp Pendleton, Calif., according to a Naval Medical Forces Pacific news release Sunday. A Role-3 facility provides a level of care three steps from the battlefield, according to the release. Role-1, by comparison, is a corpsman providing care at or near the battlefield.

The Camp Foster facility was built for up to 454 staff members, 20 intensive care beds, 130 acute care beds and four operating rooms that can conduct up to 36 surgeries per day, Smith said. The facility is also stocked with medications, ventilators and its own blood supply.

The facility could also be used for humanitarian and disaster relief, Smith said.

“We have all the monitoring needs and the emergency resuscitative equipment necessary just like in any emergency room,” facility acting executive officer Capt. Chris Keith said as corpsmen worked around him. 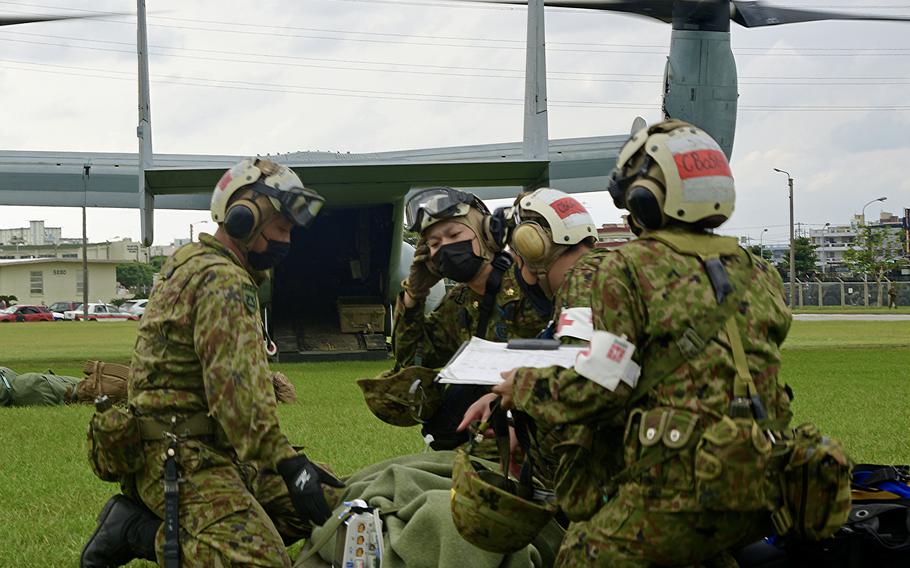 Troops with the Japan Self-Defense Force prepare to move a simulated casualty as part of emergency medical drills at Camp Foster, Okinawa, Japan, on Nov. 15, 2022. (Frank Andrews/Stars and Stripes)

The Role-3 facility is too big for the battlefield and is a higher level of care but can be scaled down depending on where it is needed, Arles said.

“This is a scalable facility so it does not have to be deployed in its entirety and therefore can be more mobile and moved to a location where it’s needed,” he said. “Or, in a larger scale operation, the full facility can be deployed, obviously with less mobility, but with more capacity and more capabilities.”

Force Design 2030 cut tanks, towed cannon artillery and some helicopter units for smaller, faster, harder-to-detect fighting formations armed with long-range precision-fire capabilities in the form of light attack munitions. Expeditionary advanced base operations call for these mobile units to disperse inside the range of enemy missiles to seize and hold islands and sink enemy vessels at sea. The Marines on Okinawa have been rehearsing the concept piece by piece since its inception.