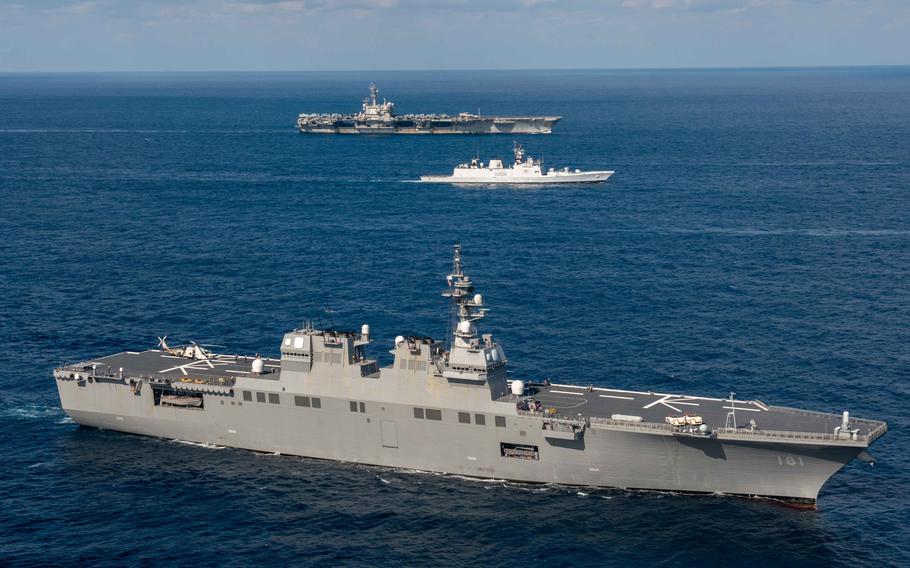 The Japanese destroyer JS Hyuga steams in formation with the Indian frigate Shivalik and the aircraft carrier USS Ronald Reagan in the Philippine Sea during Exercise Malabar Nov. 11, 2022. (Michael B. Jarmiolowski/U.S. Navy)

TOKYO — Warships from the United States, Japan, India and Australia trained together in waters near Japan this week as part of drills designed to deter adversaries, according to officials from the four nations.

Exercise Malabar 2022, which ended Tuesday, included drills in the Philippine Sea and off the coast of Japan, the U.S. Navy said in a news release announcing the start of the drills Saturday.

The Quadrilateral Security Dialogue, or Quad, is an informal group seen as a strategic hedge against Beijing’s rising military power. They have combined for the annual Malabar drills since 2020.

Retired Adm. Gary Roughead, speaking Oct. 18 at the Center for Strategic and International Studies/Nikkei Symposium in Tokyo, said the four should stand up a permanent force.

“My belief is that to get the Quad moving, we should establish a standing Quad maritime force that’s in being all the time,” he said, according to an Oct. 21 Nikkei Asia report. He suggested the command of that force “would rotate perhaps every six months among the countries.”

Malabar is “an outstanding opportunity for our like-minded maritime forces to work together, demonstrating our shared commitment to the region and collaborative approach toward security and stability,” Rear Adm. Michael Donnelly, commander of Task Force 70 and Carrier Strike Group 5, said in the U.S. Navy statement.

It’s more important than ever for the deployed strike group to work closely with other maritime forces and deter those who challenge a free and open Indo-Pacific, he said.

The U.S. sent the aircraft carrier USS Ronald Reagan, homeported in Japan at Yokosuka Naval Base, along with the guided-missile cruiser USS Chancellorsville and guided-missile destroyer USS Milius, the Navy statement said.