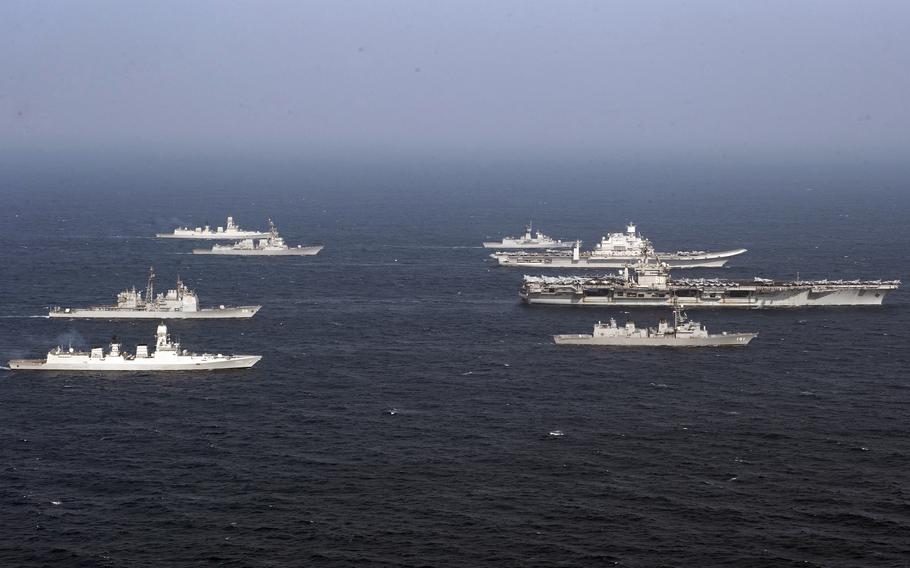 Warships from the United States, India, Australia and Japan train together during the Malabar exercise in the Arabian Sea, Nov. 17, 2020. (Keenan Daniels/U.S. Navy)

The United States should combine with India, Australia and Japan to launch a standing Indo-Pacific maritime force to counter China, according to a former U.S. chief of naval operations.

The members of the Quadrilateral Security Dialogue, or Quad, an informal group seen as a strategic hedge against Beijing’s rising military power and in recent years have trained together during the Malabar naval drills.

However, retired Adm. Gary Roughead, speaking at the Center for Strategic and International Studies/Nikkei Symposium in Tokyo Oct. 18, said the four should stand up a permanent force.

"My belief is that to get the Quad moving, we should establish a standing Quad maritime force that's in being all the time," he said, Nikkei Asia reported Friday. He suggested the command of that force "would rotate perhaps every six months among the countries." 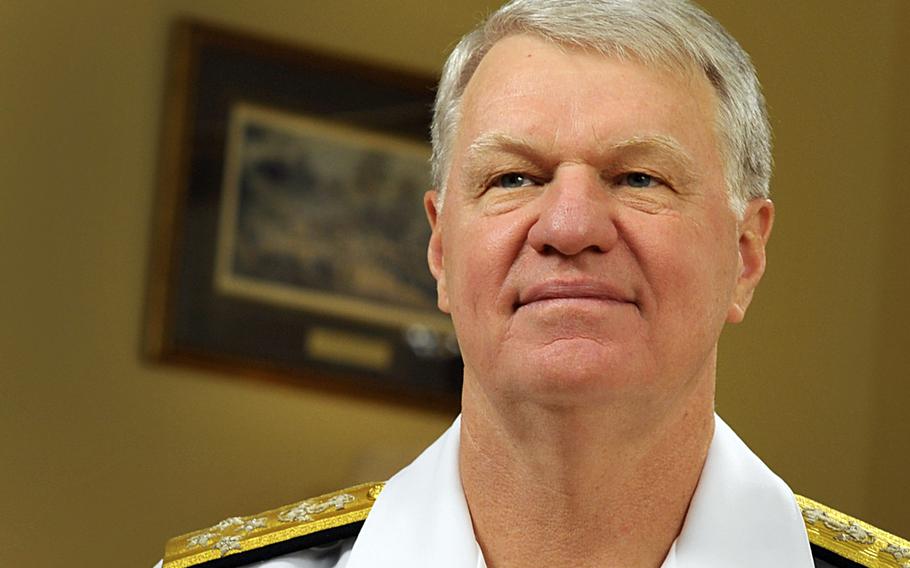 The force would support coast guards and help protect maritime resources, said Roughead, who oversaw U.S. naval operations from 2007 to 2011.

One of only two officers in the Navy’s history to have commanded both the U.S. Atlantic and Pacific Fleets, Roughead also suggested splitting the Indo-Pacific command with a headquarters in Northeast Asia and another covering Southeast Asia and the Indian Ocean.

"To think that there is one entity that can control military forces across this wide area, [considering] the way China has adapted over the last 25 years, I think is a false assumption," he said, according to Nikkei.

The idea of a combined Indo-Pacific naval force seems akin to maritime groups of four to six frigates or destroyers employed by the North Atlantic Treaty Organization in the Atlantic and Mediterranean, said former Navy Capt. Jan van Tol, a senior fellow at the Center for Strategic and Budgetary Assessments, a nonprofit defense-policy think tank in Washington, D.C.

“These groups are intended to be NATO’s standing ‘immediate reaction forces,’” he told Stars and Stripes in an email Tuesday.

NATO’s maritime forces, however, are composed from nations that are formal treaty allies, Van Tol said.

“And it is difficult to see India acceding to such a relationship as they have historically remained neutral and not part of any military alliance,” he said.

A permanent unit would give members a sense that they have a real-world mission rather than training together periodically before heading back to homeports, according to retired Marine Col. Grant Newsham, a senior researcher with the Japan Forum for Strategic Studies in Tokyo.

“If you want to bring people together and create a team, you want them working and living together,” he said in an email Monday.

Navies from other free nations might want to join such a force as occasional or regular participants, Newsham said.

Darwin, Australia, would be a candidate for the force’s homeport, he said, but other options could include Guam, Japan, Palau or the Federated States of Micronesia.

A Quad maritime force would need at least one warship from each nation along with several others to keep it operational, Newsham added.

“Were it me, I would use a couple amphibious ships as the 'core' of the force and add a couple surface combatants or a supply ship and a combatant,” he said.

The force could train for humanitarian assistance and disaster response, which involves 90% of the skills needed for warfighting. It might also conduct patrols to combat illegal fishing in the central Pacific, where Chinese fishing boats are serial poachers, Newsham said.

The creation of a Quad maritime force would likely upset Beijing, he said.

“I imagine there will be political reticence all around — mostly fear of angering China, and I should imagine the navies themselves will resist, citing lack of resources to devote to the effort,” he said.

The proposal seems premature, according to Carlyle Thayer, an emeritus professor at the University of New South Wales and lecturer at the Australian Defence Force Academy.

The Quad, he said in an email Monday, is focused on nontraditional security issues such as global health, climate, infrastructure, cyber security, critical and emerging technologies and space.

“Military interaction among the four members, such as participation in [Exercise] Malabar, takes place outside the formal Quad process,” he said. “It is difficult to see either India or Japan committing naval assets to opposite ends of the Indo-Pacific Region on a standing basis out of their normal area of current operations.”