China remains focus of military drills in Japan, despite subdued US messaging 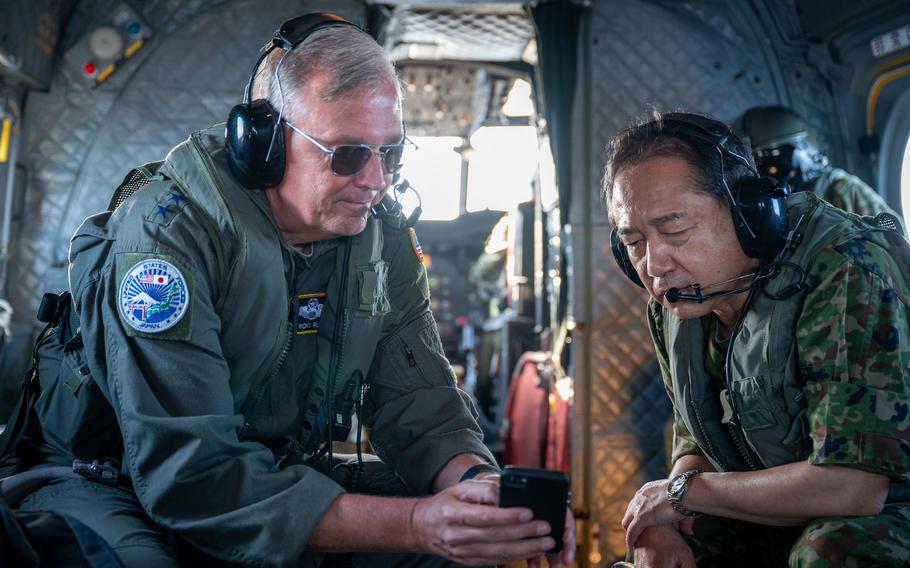 YOKOTA AIR BASE, Japan — U.S. and allied forces remain focused on China despite low-key comments from the man leading U.S. forces in a major exercise in Japan this week, according to security experts.

“There are those who remain determined and not slowing in their intents to unilaterally dismantle peace; we therefore cannot rest in defending peace,” Rupp said, speaking from the deck of the helicopter carrier JS Izumo. USFJ provided a transcript of the press conference.

Rupp’s remarks contrast with those of his predecessor, Lt. Gen. Kevin Schneider, when Keen Sword kicked off in October 2020. Schneider called out China for “malign activities” against its neighbors in the Western Pacific.

The change in tone represents an effort by President Joe Biden’s administration “to not antagonize [China] while attempting to re-build channels of communication with it,” Paul Buchanan, a New Zealand-based U.S. security expert, said Wednesday in an email to Stars and Stripes.

Keen Sword began as Biden and Chinese President Xi Jinping met during the G20 Summit in Bali, Indonesia. Biden raised objections to China’s “coercive and increasingly aggressive actions toward Taiwan,” according to a readout of the meeting released by the White House.

Whatever message is conveyed in public, China remains the focus of Keen Sword, James Brown, an international affairs expert at Temple University’s Japan campus, said in an email Wednesday.

“These exercises are being conducted with China foremost in mind,” he said. “After all, there is no change in the fact that China is viewed as the main threat to both the US and Japan.”

The decision to refer vaguely to provocative forces rather than China, may reflect a U.S. desire to not unnecessarily provoke Beijing at a time when Washington hopes China may be induced to quietly pressure Russia to end its war in Ukraine, he said.

Tensions in the region spiked Aug. 3 when U.S. House Speaker Nancy Pelosi visited Taiwan on a broader Asian tour. The visit prompted China, which sees the self-governing island as a breakaway province that must be reunited with the mainland, possibly by force, to stage live-fire drills that encircled Taiwan.

Biden in a CBS “60 Minutes” interview aired Sept. 18 said U.S. troops would defend the island if China invaded, although the White House later walked back those comments. It did the same after the president made a similar statement while visiting Japan in May.

China has territorial disputes with Japan in the East China Sea and with many of its other neighbors in the South China Sea, where Beijing has built military facilities on disputed islets.

A generation or more of U.S. military officers were conditioned to avoid saying anything that suggested the Chinese communists were even a potential adversary, retired Marine Col. Grant Newsham, a senior researcher with the Japan Forum for Strategic Studies in Tokyo said in an email Wednesday.

“The more important thing is what sort of training is going on a Keen Sword,” he said. “And it looks like very good training in the sense it’s complex and aimed at fighting a war.”