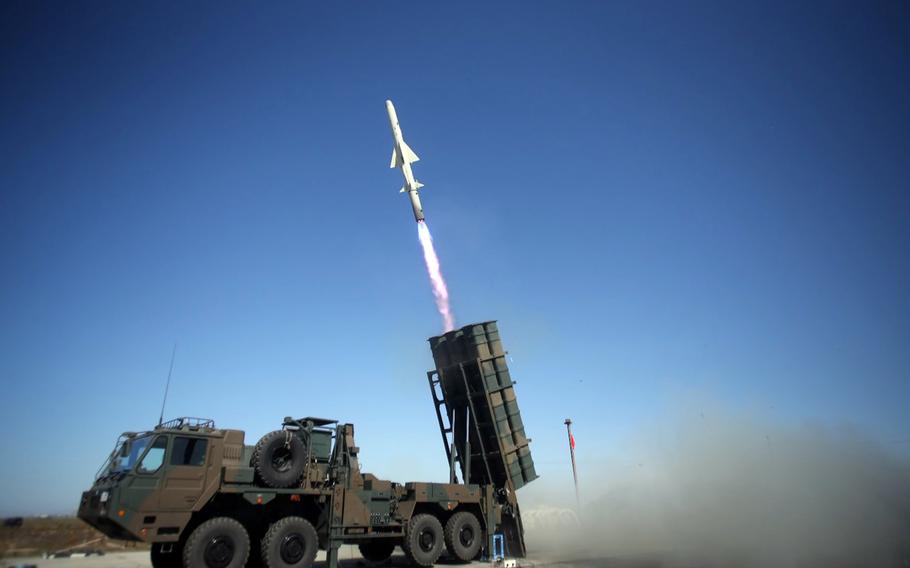 Members of the Japan Ground Self-Defense Force fire a Type-12 missile in this undated photo. (JGSDF)

CAMP FOSTER, Okinawa – Japan’s reported plan to extend the range of a high-speed missile, currently in development, to reach the Senkaku Islands and parts of China and North Korea may require it to amend its pacifist constitution, according to a retired general.

Work on the land-based, long-range missile, which has yet to be named, began in fiscal year 2018, Kyodo News reported Oct. 30. Prototypes have a range of just over 400 miles. An improved missile would extend that range by an additional 200 miles, according to the report, which cited unnamed government sources.

Security experts believe the longer range is necessary due to burgeoning threats in the region, but at least one believes Japan may have to change its constitution to facilitate such an upgrade.

Article 9 of the country’s constitution states that its people “forever renounce war as a sovereign right of the nation and the threat or use of force as means of settling international disputes.”

“It is necessary to change [the constitution], but it is important that the political parties come together,” Toshiyuki Shikata, a former lieutenant general in the Japan Ground Self-Defense Force, told Stars and Stripes by phone Tuesday. “It is not just about changing the capacity of the missiles; it’s about changing the concept of national security.”

Shikata believes that increasing the missile’s range to include parts of China and North Korea would make the weapon offensive in nature, running afoul of Article 9.

Junjiro Shida, an associate professor of international politics at Meio University on Okinawa believes increasing the missile range is appropriate.

“Each country must protect their territories by themselves against countries that conduct military attacks,” he told Stars and Stripes on Wednesday. “So, it is appropriate to think that the government is starting to consider these opinions.”

A spokesman from Japan’s Ministry of Defense requested questions in writing from Stars and Stripes on Tuesday but had not responded as of Friday afternoon. Some government officials in Japan speak to the media on condition of anonymity as a requirement of their positions.

The missiles are expected to be “mass produced” sometime after April 2023 and deployed in fiscal 2026, the Kyodo report said.

They will contain a number of features that make them hard to intercept, according to the report. They may be fired from mobile launchers; warheads will separate at a high altitude and travel on an irregular path before gliding toward their targets at supersonic speed.

News of the possible upgrade comes at a time of increasing tensions in the region. Japan and China remain at odds over the uninhabited but resource rich Senkaku chain, which are approximately 105 miles northeast of Taiwan and about 280 miles west of Okinawa. Taiwan also claims the islands.

The Senkakus, which China calls Diaoyu Dao, are the scene of frequent territorial clashes between Japanese and Chinese fishermen and coast guard vessels.

Chinese threats of integrating Taiwan by force have also rankled Japan, as have North Korea’s constant missile barrages, including one missile earlier this year that flew over the Japanese mainland.

“The possibility of a military attack is getting higher,” Shida said.

Shikata believes the situation regarding Taiwan is more worrying than the war in Ukraine.

“If China attacks Taiwan, it will threaten the lives of the Japanese,” he said. “Japan has no choice but to reinforce their weapons.”