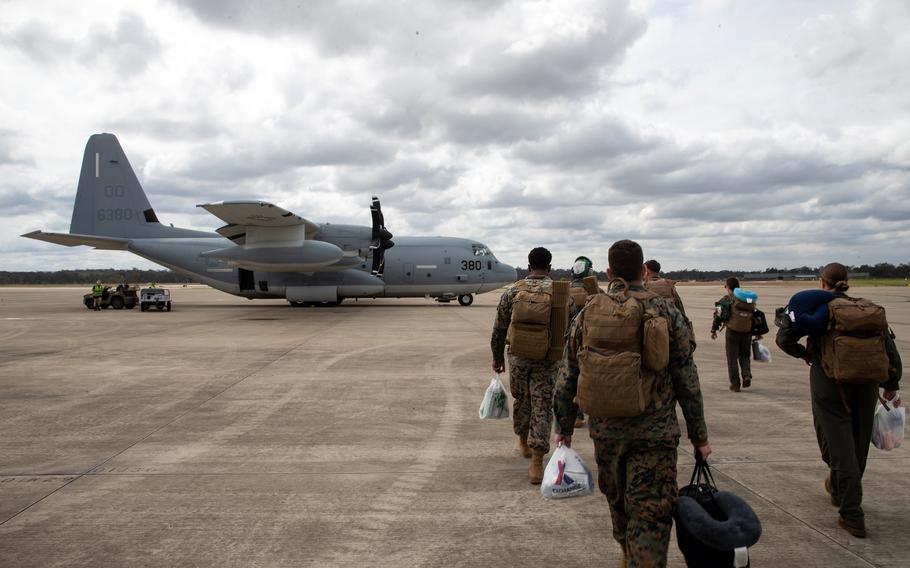 The Marine Corps is looking at northern Australia, where 2,200 Marines wrapped up a six-month training rotation this week, as a hub to launch influence into Southeast Asia, according to a former Marine officer.

On Monday, Rotational Force–Darwin, led by 5th Marine Regiment, 1st Marine Division, concluded its 11th rotation to the southern continent since 2012, Capt. Joseph DiPietro, a spokesman for the force, said in a news release Tuesday.

Last month, a pair of MV-22 Osprey aircraft from Marine Medium Tiltrotor Squadron 268 left Australia for their home base in Kaneohe Bay, Hawaii. The 6,100-mile, island-hopping flight, supported by a KC-130J refueler, included stops in Fiji, American Samoa and the Republic of Kiribati.

Darwin is looked at as more than just an Australian version of the Marine Corps Air Ground Combat Center, its training area at Twentynine Palms, Calif., retired Marine Col. Grant Newsham, a senior researcher with the Japan Forum for Strategic Studies in Tokyo, said in an email Wednesday.

“It seems the Marines now look at Darwin and the Australia deployments as a hub from which to ‘influence’ outwards into Southeast Asia and the region,” he said.

The Marines who went Down Under this year trained in every Australian state except Tasmania and worked alongside peers from Australia, Indonesia, Japan and Timor Leste, DiPietro said.

Previously, Marines from the rotational force trained in countries near Australia such as Timor Leste and Tonga.

There are political and psychological aspects to the rotations, Newsham said.

“It suggests a degree of seriousness and permanence on the part of the Marines and the U.S. that hasn’t always been a hallmark of U.S. activities in the region,” he said. “And it’s all done with an eye to a future fight – if that’s necessary. In other words, something serious is coming and everyone knows it.”

Southeast Asia is a potential arena of conflict with China, which has built bases on disputed territory in the South China Sea and vowed to reunify Taiwan, by force, if necessary, with the country.

Northern Australia has become a key operating base for the Marines in the region, Newsham said.

“There of course should be a lot of other places the Marines (and U.S. forces) are set up in the Indo-Pacific,” he said. “But there aren’t … so Darwin’s importance is magnified.”

This year’s Marine rotation to Darwin was possibly the busiest to date, Ross Babbage, a former Australian assistant defense secretary, said in an email Wednesday.

“I am expecting more and larger rotations in the future as well as more substantial [U.S. Air Force and Navy] and probably U.S. Army operations in and around Australia in coming years,” he said.

During Exercise Koolendong in July and August, the Marines moved troops and vehicles 650 miles from Darwin to Broome, 1,000 miles north of Perth in Western Australia, using a U.S. Army logistics support vessel and MV-22s.

Over the past six months, Marines practiced littoral combat and sea-denial tactics on islands north of Australia, such as the Tiwi Islands in the Timor Sea and South Goulburn Island in the Arafura Sea, DiPietro said in the news release.

They also exercised at the Shoalwater Bay Training Area and a jungle training center in Tully, Queensland, and the Yampi Sound Training Area in Western Australia, he said.

“Throughout their training … Marines learned a lot about Indo-Pacific field craft, which allowed them to adjust to the high temperatures, humid air, and increased vegetation,” DiPietro said.

Significantly, the rotation included an expeditionary advanced basing exercise in August and September to seize and hold South Goulburn Island in the Arafura Sea, said Carlyle Thayer, an emeritus professor at the University of New South Wales and lecturer at the Australian Defence Force Academy.

“The mission of the attacking force was to exercise area denial by setting up low altitude air defenses,” he said in an email Wednesday.

Next year’s rotation is scheduled to start in March and include training on sea-lane ambush and sea-denial against hostile warships, Thayer said.