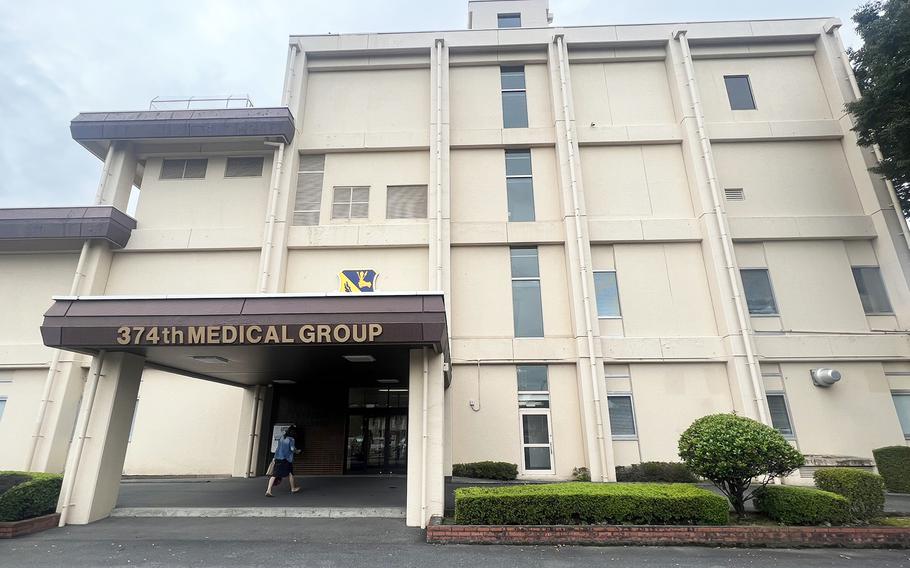 Military hospitals at Yokosuka Naval Base, the homeport of 7th Fleet, and Yokota Air Base, the headquarters of U.S. Forces Japan, this year said some civilians must seek treatment from Japanese providers. (Kelly Agee/Stars and Stripes)

Civilian employees of the Defense Department in Japan should “have a plan in place” for medical care from a local provider in the event military hospitals are unable to see them, the head of military medical care in the Pacific said Monday.

The Defense Health Agency is legally obligated to prioritize active-duty service members and their families, Army Maj. Gen. Joseph Heck, director of DHA Region Indo-Pacific, told Stars and Stripes during a video call. DOD civilians and anyone not covered by the military’s Tricare Prime medical plan are seen in military hospitals on a space-available basis.

Military hospitals at Yokosuka Naval Base, the homeport of 7th Fleet, and Yokota Air Base, the headquarters of U.S. Forces Japan, this year said some civilians must seek treatment from Japanese providers.

In response, the Japan Medical Forum, a group of DOD civilians, started a petition Oct. 10 on change.org urging Congress to preserve civilians’ access to routine health care at military hospitals and to protect them from denials by off-base providers. The petition had received 1,026 signatures by Monday.

Heck said DHA, which manages military medical facilities across the armed services, is attempting to make room for civilian patients, but they should be prepared for when that effort falls short.

“It really is incumbent upon the non-enrolled population to have a plan in place to get the care that they may require outside of the military treatment facility,” he said.

Seeking health care in a foreign country may be difficult, Heck said, but the onus of navigating those challenges falls on those civilians.

“We commiserate and empathize with the difficulty that they may be having in getting the health care that they need for themselves or their families,” he said. “And we encourage them to work with their hiring agency and their human resources department to try to find care on the economy during this time, when they cannot get into the military treatment facility.” Military hospitals at Yokosuka Naval Base, the homeport of 7th Fleet, and Yokota Air Base, the headquarters of U.S. Forces Japan, this year said some civilians must seek treatment from Japanese providers. (Alex Wilson/Stars and Stripes)

Alexandra Cummings, a DOD civilian spouse at Yokosuka and a forum member, said DHA is negligent in creating a sudden, blanket ban on treating civilians without an agreement in place with Japan to provide them with medical care.

Many DOD civilians arrived in Japan after a cursory medical screening and have medical issues that would disqualify active-duty military members from serving overseas, Cummings told Stars and Stripes by Facebook Messenger on Monday.

“I think we were largely not informed,” she said. “Circumstances have changed drastically on the ground so much that we have people having health [crises] and they can’t even get into a Japanese medical provider. No one talked about that.”

Heck said that under Chapter 55 of Title 10 U.S. Code, section 1071, and a 2018 DHA procedural instruction, the agency is obligated to prioritize care for active-duty service members.

The availability of appointments can change rapidly based on the number of providers or patients, he said. Changes in personnel are behind the recent lack of civilian appointments at Yokota, where civilian pediatric patients were sent off base, and at Yokosuka, where all civilians without Tricare Prime were diverted to local providers for certain services, such as pediatrics, mental health or family medicine.

However, DHA is working with U.S. Naval Hospital Yokosuka and other military providers to reopen space-available appointments for civilians, Heck said. He was unable to estimate when that may happen.

DHA has “no concerns” about space-available appointments at military hospitals other than Yokosuka, DHA spokeswoman Whitney Trimble told Stars and Stripes by email Monday.

But the number of space-available appointments depends upon how many appointments are left after active-duty service members and their dependents have been seen, Trimble said.

“Because of this fluidity, there is no way to anticipate how many space-available appointments we will have in [a military treatment facility] at a given time,” she said.