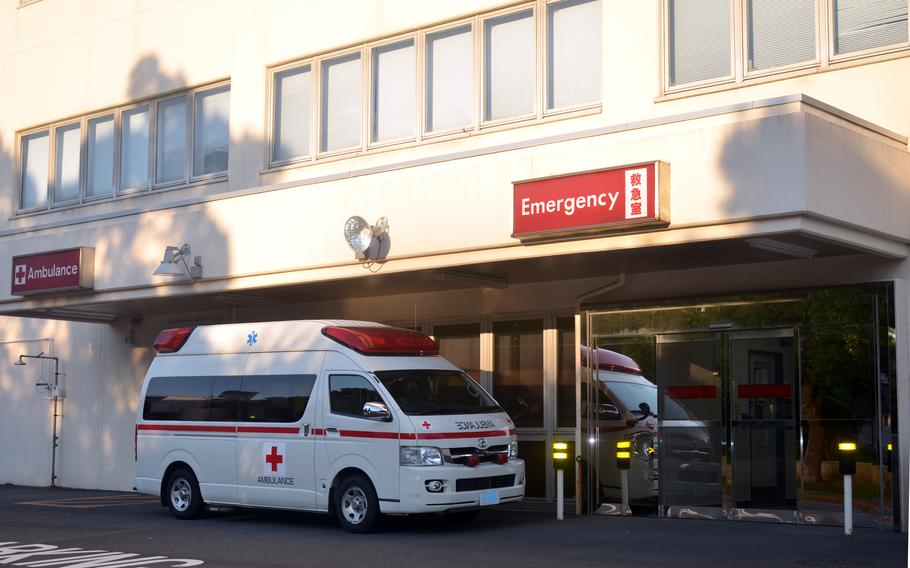 YOKOSUKA NAVAL BASE, Japan – A town hall meeting on Thursday at the home of the U.S. 7th Fleet was inundated by a barrage of questions about the lack of health care options for civilians at U.S. Naval Hospital Yokosuka.

Teachers, contractors and other U.S. base workers have taken to social media over the past two weeks to voice concerns about their inability to make appointments at the hospital. At Thursday’s meeting, hospital executive officer Capt. Jenny Burkett attempted to clear the air.

Part of the issue, Burkett explained, stems from the hospital’s Feb. 28 shift from the Navy Bureau of Medicine and Surgery to the Defense Health Agency. DHA assessed the Yokosuka facility’s performance between July and September and determined there weren’t enough available appointments for active-duty service members and their dependents.

“We weren’t able to provide care to the people that we were tasked to care for, so we had to prioritize those people,” Burkett told the town hall audience. “And that left civilians feeling that they weren’t getting health care.”

The hospital is authorized under DHA to provide care for Tricare recipients, while those who aren’t enrolled or have other insurance may make appointments on a space available basis.

However, the current issue is that there is zero space available for non-Tricare holders, Burkett said.

Staffing isn’t the issue, she told Stars and Stripes after the meeting, but an influx of new active-duty patients who are given priority.

Burkett said she anticipates more space to open for civilians in the future but couldn’t speak to when that would be.

Burkett suggested that civilians consider their other options, which include off-base care and telehealth services.

“Many health plans have telehealth, so someone can talk to a U.S. provider in America that speaks English and get prescriptions,” she told the town hall audience, adding that the hospital also provides a list of English-speaking medical services in the region.

But those suggestions didn’t sit well with some in the audience. Some complained about the lack of notice; others raised concerns about seeking medical care off base.

“Is there any leeway for people who are in these time crunches that are essentially left without health care?” asked one audience member, who didn’t identify herself, before adding that September is suicide awareness month. “I know people who, when this came out, had less than a week of antidepressants left.”

Burkett repeated her earlier guidance and said the hospital is working “every day to scrub our appointments to make sure that we have more than we have now.”

Others noted that language barriers and differences in health care between the United States and Japan could pose significant problems. One audience member questioned whether Japanese medical facilities might begin to deny them care after being “flooded with thousands” of new patients.

The base has a population of approximately 27,000, and around 4,000 of those are not covered by Tricare, Burkett said at the town hall.

Amber Malone, a teacher at The Sullivans Elementary School on base who’s lived in Japan since 2017, said that while health care has always been a “challenge” for civilian employees, the lack of available appointments is concerning.

“It leaves a lot of people in a bind, and even then, what they’re saying is the official policy is not being communicated the same by every department,” she told Stars and Stripes by phone Thursday. “The pharmacy is telling some people that they’re not going to fill their prescriptions anymore. There’s a lot of inconsistencies in the messaging.”

“It felt very disrespectful, to be honest,” she told Stars and Stripes after the meeting, stressing that her comments do not represent the government. “People have legitimate medical concerns, and we weren’t really given any answers other than to talk to our insurance providers or go off base, and it felt like our concerns were being dismissed.”

After the meeting, base commander Capt. Les Sobol told Stars and Stripes that his main concern is that “we’re addressing problems,” and he encouraged anyone with questions or issues to speak to him directly.

“They don’t have to wait until the next time to discuss anything,” he said. “Even if it’s not something in my area, if they’re having a hard time, I can help with that. They’re all of our community members, and we want to take care of all of them.”