Marcos Jr. can’t see future for Philippines without a US partnership 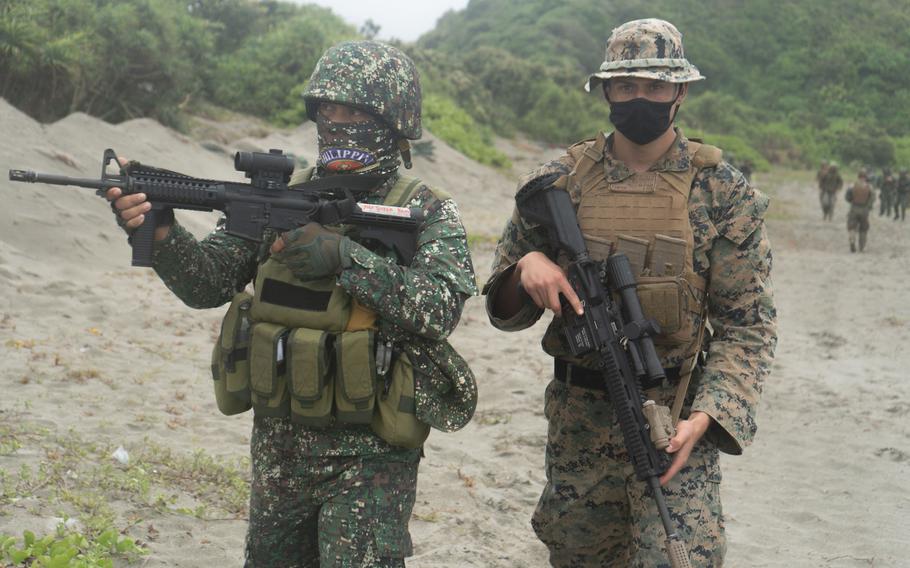 The Philippines without the United States as a partner is inconceivable, according to the country’s new leader.

President Ferdinand “Bongbong” Marcos Jr., son of the country’s late dictator who ruled from 1965-1986, made the comment during a visit to the New York Stock Exchange on Monday.

"I cannot see the Philippines in the future without having the United States as a partner … Many of the strongest corporate benefactors, really, to government and to the rest of society in the Philippines were coming from the United States," Marcos said in a video posted on his Facebook page of an interview with NYSE vice chair and chief commercial officer John Tuttle.

Strengthening the U.S.-Philippines alliance is "extremely necessary" in a time of global economic and geopolitical crisis, according to Marcos.

"They (partnerships) provide the stability in these highly unstable economic, political, geopolitical, diplomatic environment,” he said.

His comments come at a time of tension between the U.S. and China over the status of Taiwan and access to international waters. Marcos Jr. is on his first visit to the U.S. since taking office. He was scheduled to address the U.N. General Assembly in New York on Tuesday, according to the U.N. website.

The Philippines borders the South China Sea, where Beijing has aggressively expanded its territory by occupying small islets, reclaiming land and building military facilities. The Philippines, Vietnam, Taiwan, Brunei and Malaysia have territorial disputes with China in those waters.

Marcos, elected President in May, succeeds Rodrigo Duterte, who had sought closer relations with China and Russia and threatened to withdraw from an agreement that facilitates training by U.S. forces in his country.

This week’s comments mark a clear departure from the Duterte administration, according to Patricio Abinales, a professor at the University of Hawaii’s School of Pacific and Asian Studies.

“We cannot discount the fact that the U.S. has gone out of its way to reach out to Marcos soon after his election, sending top senior State Department officials to the Philippines,” he told Stars and Stripes in an email Wednesday.

China has fallen short on promises of economic assistance and increased investments made to Duterte, Abinales said.

“In the popular mind (of Filipinos), Chinese economic presence is equivalent to the illegal gambling networks and drugs,” he said. “So if you were Marcos II and you and your adviser surveyed the regional scene, then you will realize how much China has ‘disappeared’ in the Philippines while the U.S. has tried to compensate for the ‘lost Duterte years.’”

This month, Philippine Ambassador to the United States Jose Manuel Romualdez suggested that U.S. forces might be offered access to more military facilities, including a naval base in the islands.

Facilities for visiting American troops were supposed to be built on five Philippine military bases under the 2014 Enhanced Defense Cooperation Agreement. However, the only facility completed to date is a warehouse at Cesar Basa Air Base on Luzon.

In March and April, 100 U.S. service members trained in the islands with 3,800 Philippine troops during the annual Balikatan drills. U.S. sailors and Marines are headed back for the Kamandag exercise, which runs Oct. 3-14.

Kamandag, which focuses on humanitarian assistance and disaster response, replaced the annual PHIBLEX amphibious drills involving both countries’ forces on Luzon. Duterte called for the exercise to end in 2016 and it was canceled the following year.

There has been increased military contact under Marcos, but it seems to be the acceleration of a trend that began toward the end of the Duterte administration, according to Ian Chong, an associate professor of political science at the National University of Singapore.

“Marcos has also publicly indicated displeasure at [China’s] continued pressing of claims over waters and maritime features it disputes with the Philippines,” he told Stars and Stripes in an email Wednesday.

Whether the upcoming Kamandag exercise is more defense focused or continues to emphasize humanitarian assistance is probably less important than the fact that it provides a venue for U.S. and Philippine forces to work together, Chong said.