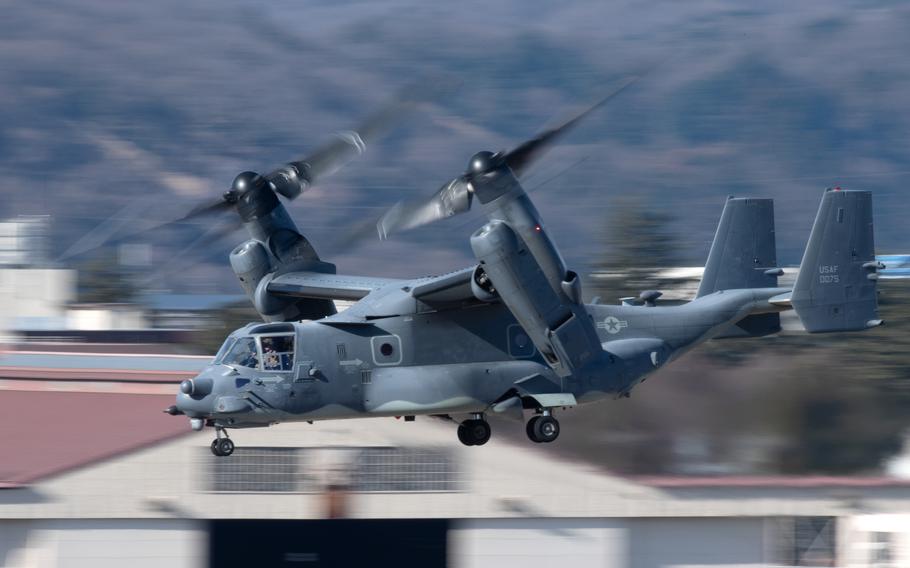 A CV-22 Osprey assigned to the 21st Special Operations Squadron takes off at Yokota Air Base, Japan, Jan. 8, 2021, during a training mission. (Yasuo Osakabe/U.S. Air Force)

YOKOTA AIR BASE, Japan — A CV-22 Osprey from the 21st Special Operations Squadron clattered above western Tokyo again Wednesday night, signaling the tilt-rotor aircraft are back in service after 2 ½ weeks on the ground.

Air Force Special Operations Command lifted the stay on Osprey flights Friday without identifying a fix for the problem that grounded the fleet for a safety pause.

The problem affecting the Osprey — a “hard clutch engagement” — is responsible for six in-flight incidents since 2017, including two in the past nine weeks. None resulted in injuries or fatalities, thanks to aircrews’ airmanship, according to Heyse in August.

The command is still in search of the “root cause” of hard clutch engagement but took steps during the safety stand-down to analyze and address the problem, according to Heyse’s recent email.

During the stand-down ordered by Slife on Aug. 16, Air Force maintenance crews inspected the drivetrains on the fleet of 52 Ospreys and compared the actual components against data in the Air Force information system, Heyse wrote.

“In the mid-term AFSOC is reviewing and analyzing data and considering replacing drivetrain components once they reach specific flight hours,” she wrote.

The clutch inside a gearbox that connects one of the CV-22’s two Rolls-Royce Liberty AE1107C engines to the propeller rotor is slipping for an unknown reason, Heyse said in August. In the event the clutch slips, it causes the aircraft to lurch as it re-engages.

Although the Osprey design allows it to instantaneously compensate for the power disparity if one engine fails, the aircrew was required to land the tilt-rotor immediately.

Heyse’s announcement did not detail the risk-control measures she described but she told Defense News on Saturday that pilots are instructed to pause for two seconds after lifting off to keep the clutch from slipping.

The brief hover is one of many techniques pilots may use to offset the clutch problem, according to an email Wednesday to Stars and Stripes from 1st Lt. Danny Rangel, spokesman for Yokota Air Base.

“This technique allows for the aircrew to check aircraft performance prior to departure from a safe landing area,” he wrote.

Rangel said other guidelines include modified takeoff techniques, discussing with squadron leaders the appropriate measures for reducing the risk of clutch problems in specific flight profiles and increased training in a flight simulator and on scenarios that involve hard clutch engagement, marginal flight power and aborted takeoffs.

During the stand-down, all CV-22 crews were briefed and met in working groups led by experts on the Osprey and the Joint Program Office, which manages the procurement, operation, maintenance and other tasks for the three branches flying the tilt-rotor aircraft, Heyse said. The meetings allowed air crews an opportunity to propose possible solutions to the hard clutch engagement problem or ways to manage it in flight, she wrote.

The Marines continued to fly their Ospreys after the Air Force stand-down. Marine pilots are trained “to react with the appropriate emergency control measures should the issue arise during flight,” Marine spokesman Maj. Jim Stenger said by email Aug. 19. Marine Ospreys have logged more than 533,000 flight hours without a “single catastrophic event” caused by the clutch, Stenger wrote.

The Japan Ground Self-Defense Forces also flew its Ospreys, based at Camp Kisarazu in Chiba prefecture, on Wednesday for the first time since Aug. 9, a spokesman told Stars and Stripes by phone. He said the Self-Defense Force never ordered its nine Ospreys grounded but refrained from flying them during the stand-down.

Yoshikuni Watanabe, the mayor of nearby Kisarazu city, said on the city website that the Ministry of Defense approved further Osprey flights on Wednesday “and we asked them to fly safely.”

Japan’s Osprey pilots “will receive training and the clutches will be checked, after safeness is confirmed the flying of Ospreys will restart,” Defense Minister Hamada Yasukazu said at a news conference Wednesday. He said the ministry considers it important to explain the situation to Kisarazu city.

A joint venture of Bell Helicopter and Boeing, the V-22 takes off and lands like a helicopter but flies like a fixed-wing plane.

At least 13 Marines have died in Osprey crashes since 2015, according to published accounts.