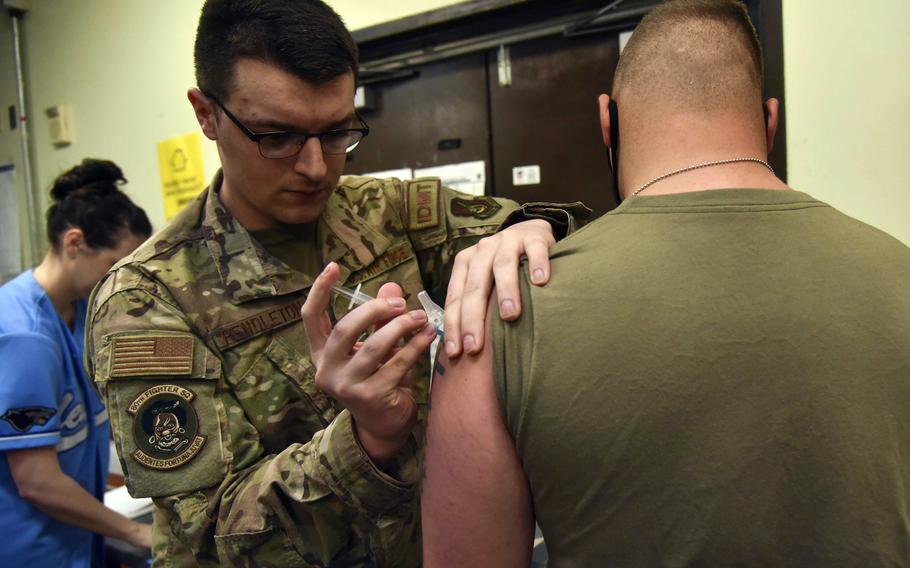 CAMP HUMPHREYS, South Korea — Cases of COVID-19 continued to increase in South Korea over the past two weeks while the U.S. military infections remained around 300 for the same period.

U.S. Forces Korea reported 316 new cases in the week ending Monday, according to an update on its website Tuesday. The command reported 294 cases between July 19 and 25, and 380 cases July 12 to 18.

The command reported its record weekly high of 1,599 cases in January.

USFK’s health protection condition remains at Alpha, which signifies a limited alert and the beginning of community transmission. The command, which is responsible for about 28,500 troops, still allows its personnel to visit most off-base businesses.

Most USFK pandemic mandates, including a mandatory seven-day quarantine for arriving personnel, were rescinded by June.

Meanwhile, COVID-19 is surging again in South Korea, which reported 107,894 cases Wednesday and a three-month high of 119,922 cases on Tuesday, according to the Korea Disease Control and Prevention Agency.

The country’s one-day record of 621,328 new infections was reported on March 17.

South Korea has recorded over 20 million COVID-19 cases, roughly 39% of its population, since Jan. 20, 2020, according to the Central Disaster and Safety Countermeasure Headquarters. As of Wednesday, 25,144 people in South Korea have died of COVID-19 complications.

“Once again, the government calls upon the people to take special care of themselves if they are at performance halls and beaches, where many people are gathered, and be careful at geriatric hospitals, where people are vulnerable to infections,” Lee Ki-il, a vice minister of health and welfare, said during a press briefing on Wednesday.

The country was better prepared to deal with the surge and was preparing for an influx of cases, Lee said.

South Korea has rescinded many of its social distancing restrictions, such as business curfews, but still requires people to wear masks when using public transportation or when out in groups of 50 or more people.