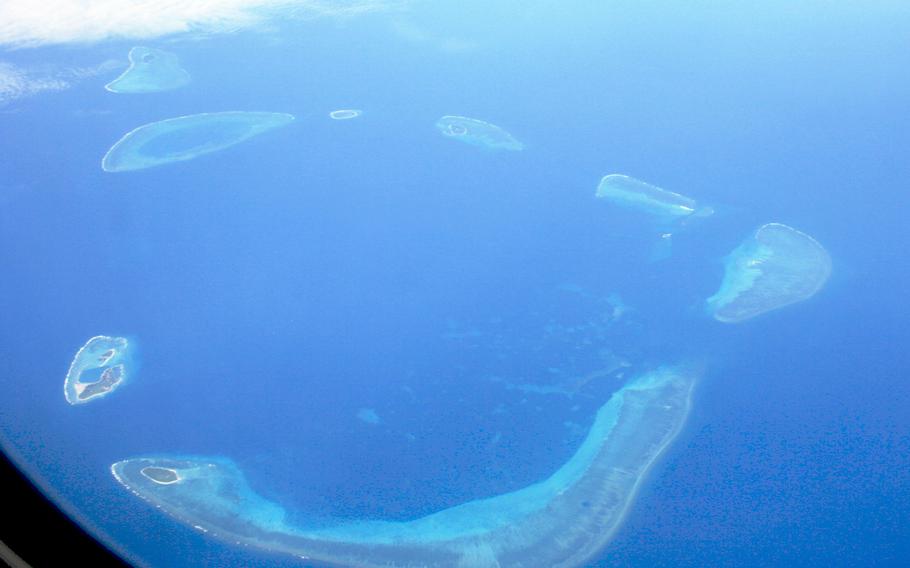 The Paracel Islands in the South China Sea are claimed in full by China, Taiwan and Vietnam. (Wikimedia Commons)

The Chinese military has announced a five-day exercise in the South China Sea in an area that overlaps a chain of disputed islands the U.S. Navy patrolled last week.

The exercise is slated to run from Saturday to July 27 in approximately 38,000 square miles of the South China Sea near the island of Hainan, a Chinese territory, China’s Maritime Safety Administration announced Friday.

The exercise area is about 221 miles off the coast of Vietnam and intersects the Paracel Islands, according to the coordinates provided.

The USS Benfold, a guided-missile destroyer, steamed past the Paracels on July 13 and then past the Spratly Islands 500 miles farther south on Saturday. Both island chains are claimed in full by China, Taiwan and Vietnam, and the operations were meant to challenge “unlawful” restrictions imposed by the three countries, the U.S. 7th Fleet said at the time.

The Navy regularly operates in and around the sea and routinely sends ships near the islands. The Benfold conducted a similar operation in January.

China, however, considers much of the South China Sea to be its territory, and it regularly denounces the presence of warships in the region.

On July 13, a spokesman for China’s Southern Theater Command, Air Force Senior Col. Tian Junli, responded to the Benfold’s operation by calling the U.S. a “security risk maker in the South China Sea” and a “destroyer of regional peace and stability,” according to the official China Military Online website.

In the days leading to the strike group’s arrival, the United States and Japan also sent 52 aircraft on exercises in the Sea of Japan, Philippine Sea and Pacific Ocean. That was a response to Chinese and Russian naval activity in the waters around Japan in weeks prior, James Brown, an international affairs expert at Temple University’s Japan campus, told Stars and Stripes at the time.

The situation in the Western Pacific can be seen as a contest of resources, Brown said by email Tuesday. China hopes it can “assert its dominance over the South China Sea by maintaining more ships for longer periods of time in the area” than the U.S., he said.

However, the exercise’s message might not be aimed only at the U.S., Brown said.

“As well as responding to the U.S., China's drills can be seen as an attempt to intimidate U.S. allies and warn them off from conducting naval activity in the South China Sea,” he said.