US, Japanese firefighters hone their mass casualty response at Tokyo air base 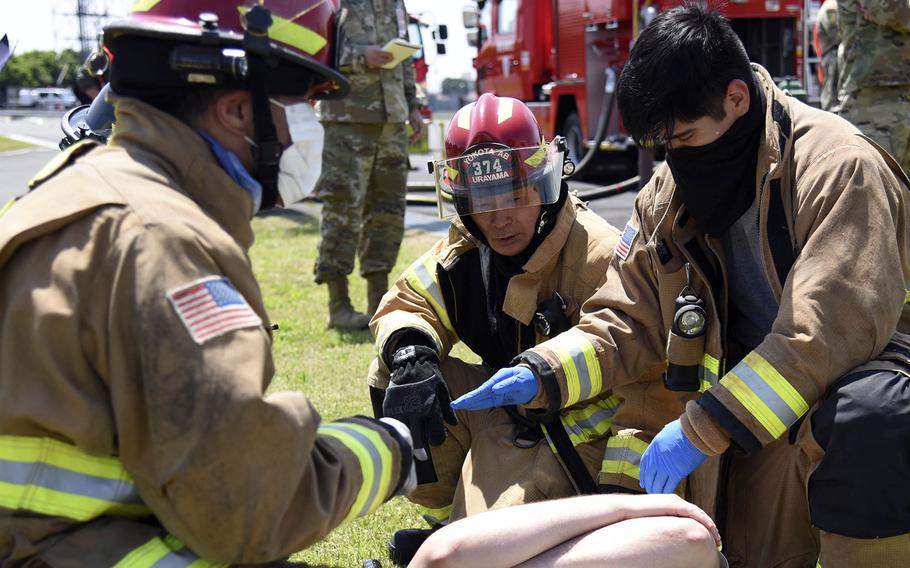 Firefighters attend to a simulated casualty during a major accident response exercise at Yokota Air Base, Japan, May 11, 2022. (Juan King/Stars and Stripes)

More than 100 firefighters and other first responders from four U.S. military installations and one Japanese fire department converged at Yokota on Wednesday to practice their response to a major aircraft accident.

Airmen and crew from Yokota’s fire department and 374th Medical Group joined firefighters from Misawa Air Base, Naval Air Facility Atsugi, Yokosuka Naval Base and their Japanese counterparts from Fussa city in Tokyo.

“It’s important if this were to happen in real life,” Maj. Christopher Wolff, the 374th Airlift Wing’s chief flight safety officer, told Stars and Stripes during the exercise. “As a military aviator, we practice what we do and we’re very good at what we do. But mishaps are still a fact of life, and when they do happen, we need to be ready to respond as quickly and efficiently as possible.” Firefighters work to extinguish flames from a simulated helicopter crash during a major accident response exercise at Yokota Air Base in western Tokyo, May 11, 2022. (Juan King/Stars and Stripes) A Fussa city firefighter shouts instructions during a major accident response exercise at Yokota Air Base in western Tokyo, May 11, 2022. (Juan King/Stars and Stripes)

Planners laid out the major accident response exercise, or MARE, starting in January; it was the first big exercise of its kind at Yokota since 2019, before the COVID-19 pandemic officially arrived, Wolff said.

At the start, firefighters extinguished simulated aircraft and building fires.

First responders created a mass casualty zone where they gathered and treated the injured, part of the routine in this type of mishap, Wolff said.

An emergency operation center, also organized as part of the exercise, provided a central location for communicating with the aircraft’s home base, he said.

“This is a really joint and multinational effort,” he said. “We can practice our response capabilities and integrate with the local authorities in the event that the worst happened off base.” 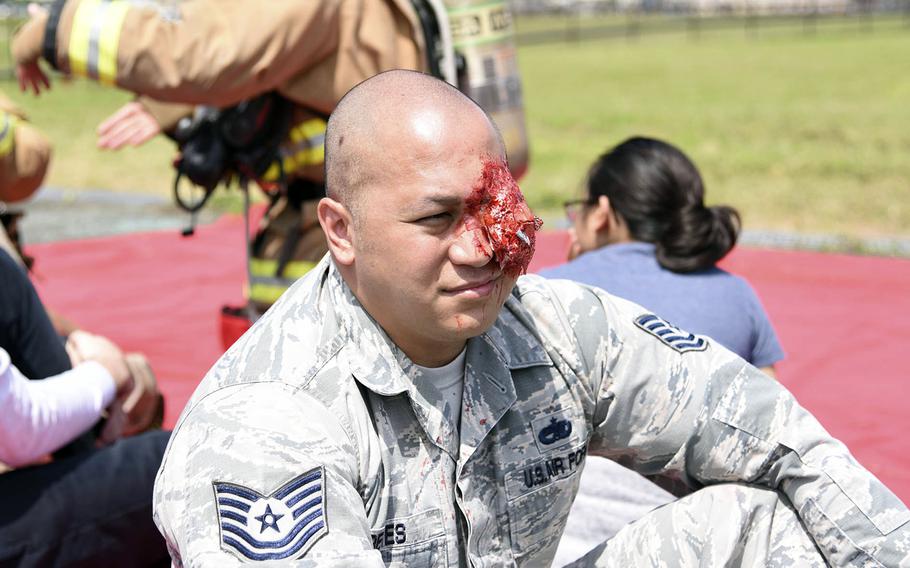 As firefighters snuffed out flames and the medical group sorted through casualties in the triage area, unit evaluators sized up how well they performed, said Yokota spokesman Staff Sgt. Juan Torres Chardon.

Even during an exercise, a mass-casualty scenario is a tough job to handle, according to one firefighter Kento Atari, 31.

“It’s pretty messy, but we’re doing the best we can,” he said.