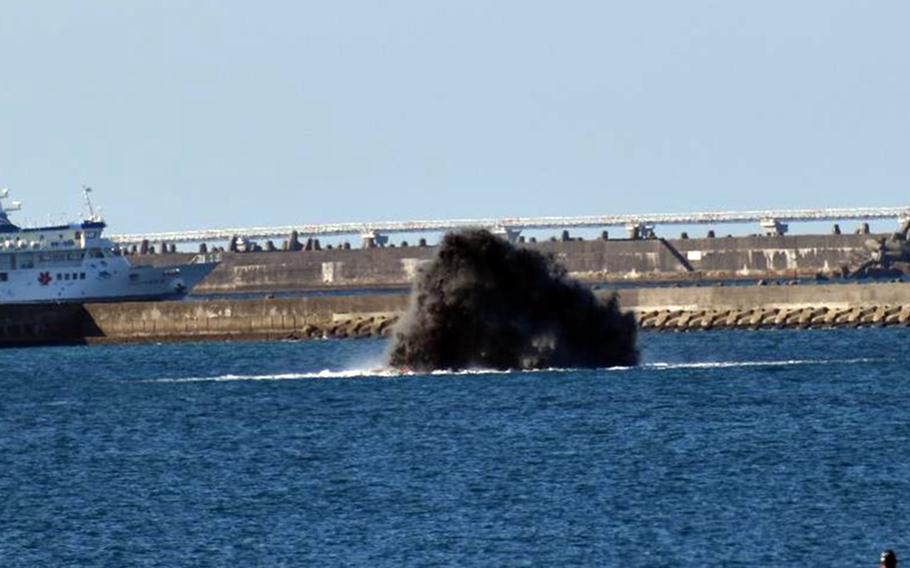 Even 50 years after Okinawa Prefecture was returned to Japan, an average of over one unexploded bomb is found in the prefecture a day.

Okinawa Prefecture was where one of the bloodiest battles between Japanese and U.S. military forces took place in the final months of World War II.

On the morning of April 29, an explosive sound was heard in a residential area in the Oroku district of Naha.

According to the Ground Self-Defense Force, an unexploded 5-inch shell, which had been fired from a U.S. warship during World War II, was found at a house construction site. Due to the danger, the GSDF built a bunker, which was 2 meters wide and 6 meters tall, around the bomb before destroying it.

During the operation, 360 people from about 120 households were forced to evacuate.

“There are still many unexploded bombs here,” said Katsuko Kinjo, 83, who lives nearby. “It reminds me of the Battle of Okinawa.”

According to the Okinawa prefectural government, about 200,000 tons of bombs were used in the battle by U.S. military forces, leaving a large number of unexploded ordnance in the prefecture. Before Okinawa was returned to Japan, the U.S. military and others recovered and disposed of about 5,500 tons of such bombs. Since its return, the Self-Defense Forces had disposed of about 2,100 tons by the end of March this year. However, it is estimated that about 1,900 tons have yet to be recovered.

Many such bombs are discovered at construction sites, including one in Itoman. In January 2009, a shovel accidentally struck an unexploded bomb, causing it to detonate. As a result, one person suffered serious injuries while another suffered minor ones. The construction was a project ordered by the Itoman municipal government.

There have been at least 14 accidents in Okinawa related to the detonation of unexploded bombs since 1972.

The accident that caused the most casualties took place near a kindergarten in the Oroku district of Naha on March 2, 1974. An unexploded bomb detonated while work was being conducted on a sewer system, killing four people, including a 3-year-old girl, and injuring 34.

Katsue Adachi was 5 at the time and attended the kindergarten. Now a teacher in the city, she spoke to The Yomiuri Shimbun about her experience surrounding the explosion.

Families were visiting the kindergarten class when the accident occurred, so her mother and her two younger siblings were with her. When she and her classmates were singing a song for the March 3 Doll Festival, the windows suddenly shattered, and she was knocked down. She panicked and desperately looked for her mother. She doesn’t recall anything that happened after but remembers trembling at home, she said. The girl who was killed in the accident was the younger sister of her close friend.

Since the accident, Adachi has been frightened by the very idea of unexploded ordnance. When her family rebuilt their house, an unexploded bomb was found at the site.

“We have lived in such a dangerous place for so many years,” she said.

She decided to become a teacher because her experience led her to want to teach children the importance of peace.

However, in the January 2009 accident in Itoman, the person operating heavy machinery who suffered serious injuries and went blind was her former junior high school student.

“I want the rest of the country to know that people in Okinawa are still suffering from the legacy of World War II,” said Adachi.