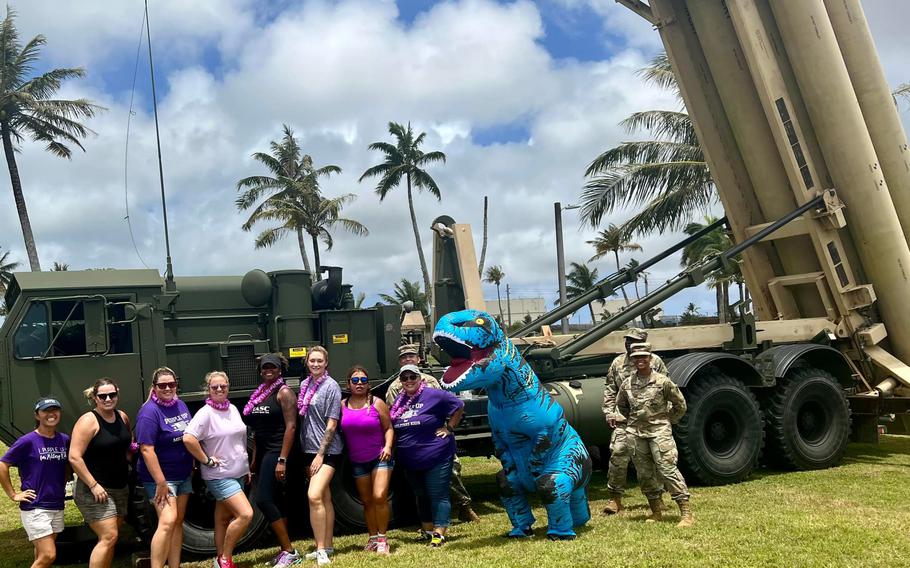 Visitors to the Fun in the Field event at Andersen Air Force Base, Guam, pose by a Terminal High Altitude Area Defense, or THAAD, launcher on April 23, 2022. (U.S. Army)

The Army is relocating its THAAD missile defense battery on Guam from Andersen Air Force Base to the nearby Marine Corps base still under construction, according to military officials.

The Terminal High Altitude Area Defense system, which has been on the island for almost a decade, will move to nearby Camp Blaz, Capt. Nicholas Chopp, spokesman for the Hawaii-headquartered 94th Army Air and Missile Defense Command, said in a phone interview Monday.

Blaz provides more room for the THAAD battery to operate, while freeing up space for the Air Force to use on Andersen, Chopp said.

Relocating THAAD came as the result of recent evaluations by the Missile Defense Agency of the risks the island faces from hypersonic and ballistic missile threats, the commander of Joint Region Marianas told reporters on Guam earlier Monday.

“They brought some highly technical gear with them to really assess how things are in the electromagnetic spectrum, where things are best meant to go — these sorts of things,” Rear Adm. Benjamin Nicholson said, according to The Guam Daily Post. “And in the process of doing that we’ve learned some things.”

“We’ve realized that if we move the THAAD battery to another location here on the island, we can actually do a couple of things,” he said. “We can increase the capability that the THAAD provides for the defense of Guam.”

About 5,000 Marines from the III Marine Expeditionary Force on Okinawa will move to Blaz over the next five years as construction is completed.

Guam has become ever more important to Pentagon strategy as the size and ambitions of China’s military have grown over the past two decades.

As the closest U.S. territory to the contested South China Sea, Guam is seen by defense officials as a strategic hub for projecting power into and defense of the region, particularly the so-called first island chain that includes Okinawa, northern Philippines and Taiwan.

In March, the White House unveiled its proposed budget for the next fiscal year, which included almost $1 billion to fully fund a comprehensive missile defense system for Guam.

In a video announcement posted on Facebook Thursday, Nicholson told Guam residents they would be seeing equipment being moved on the island over the next couple months.

“And I don’t want you to be alarmed,” he said in the video without mentioning THAAD or any other system by name.

“What’s coming up next is the movement of some of the existing systems to new locations to be able to better defend the island and the region,” Nicholson said. “All of this is part of our long-term efforts to better defend our homeland. So anything we do in the coming weeks or months is not necessarily tied to anything a particular bad actor or adversary in the region has done. It’s through the process of experimentation and calculations and engineering that we have figured out there are better ways that we can do business with what we have now and also what is coming in the future.”

The THAAD battery has operated out of a remote section of jungle on Anderson since 2013.

The roughly two-mile move to Camp Blaz will likely take place at night sometime within the next two months, Chopp said. He declined to narrow down the time frame due to operational security concerns.