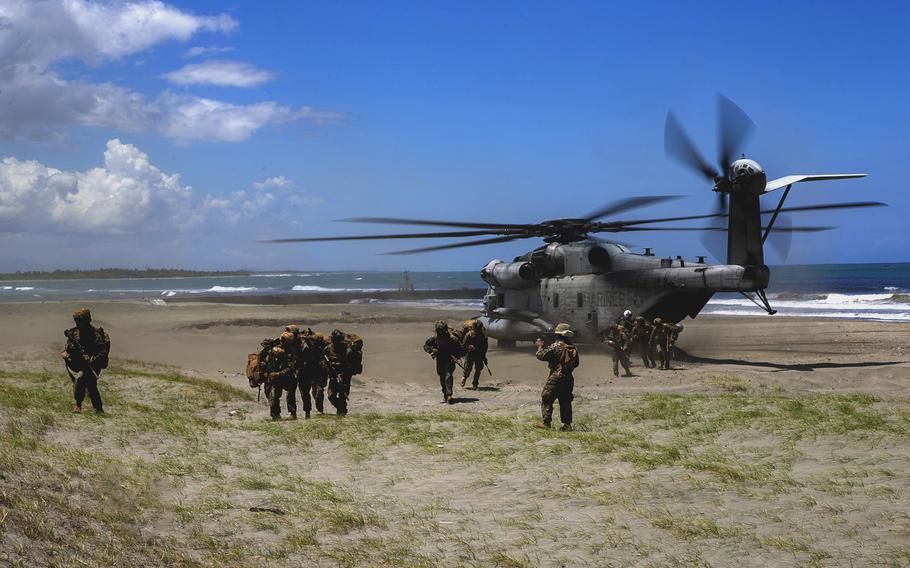 A new Marine Corps regiment, soon to be armed with anti-ship missiles, is making its first foray into the islands and waters where it’s expected to fight, according to one of the unit’s leaders.

About 90 members of the 3rd Marine Littoral Regiment, formed March 3 in Hawaii, are in the Philippines participating in the annual Balikatan exercise, Maj. Steve Stansbury, the unit’s assistant fire support coordinator, told Stars and Stripes by phone Friday.

Marines from the regiment’s headquarters are operating out of tactical vehicles and tents at an austere location on Naval Base Camilo Osias on the Philippines’ main island of Luzon, Stansbury said.

The regiment is the first of three such units that the Marines plan to form in the Pacific and is “specialized to deal with the rising threat of China,” Gen. Eric Smith, the assistant commandant of the Marine Corps, told reporters during a conference call Feb. 28.

The unit is expected to comprise 2,000 Marines working in “low-signature, long-range, highly mobile [and] easily moveable” platoons of 75-100 Marines, he said.

The small units will operate within range of hostile missiles, the so-called “weapon engagement zone,” sustain themselves for short periods while faced with the enemy and deploy new technologies and capabilities in whatever remote Indo-Pacific location they are sent, Smith said.

Balitakan “is the first exercise that the Marine littoral regiment has taken part in,” Stansbury said. “It is a big step for the regiment to go abroad into the first island chain, which is where we are going to be for operations.”

The first island chain includes Taiwan, Okinawa and the Philippines and separates the East and South China Seas and the Pacific Ocean. Military strategists believe that China’s goal is to push American and allied forces out of both seas.

During the Balikatan training the Marines are working with a Philippine coastal defense regiment to call in simulated strikes from a Marine Corps High Mobility Artillery Rocket Systems, or HIMARS, Stansbury said.

A big part of Balikatan is understanding the maritime environment in the Philippines, he said.

“It’s understanding the difference between a small civilian vessel or a commercial vessel… to be able to deconflict targets in the maritime domain,” he said. “That’s a big advantage for us.”

The Marines are learning about the Philippines’ security challenges so they can help them lead a coastal defense of their country, he said.

The regiment is still developing its techniques, tactics and procedures. To that end the Marines are recoding much of their activity to develop after-action reports, Stansbury said.

The Marine Corps War Fighting Laboratory is watching the regiment’s performance to learn lessons and come up with ideas for how it might fight. Knowledge acquired by the Quantico, Va.-based laboratory will be used to improve on the littoral regiment as it is built, he said.

The regiment will likely participate in the Kamandag exercise in the Philippines in fall and bring more Marines to next year’s Balikatan, he said.

A pair of Marine battalions will be added to the regiment over the next year, and it should reach initial operating capability by summer 2023, Stansbury said.

The unit is building its own air defense battalion equipped with new radar that will allow the Marines to track the enemy on land, air and sea, he said.

The regiment should receive the Navy-Marine Corps Expeditionary Ship Interdiction System, called NMESIS, which features a naval strike missile mounted on an unmanned vehicle, sometime between 2023 and 2025, he said.