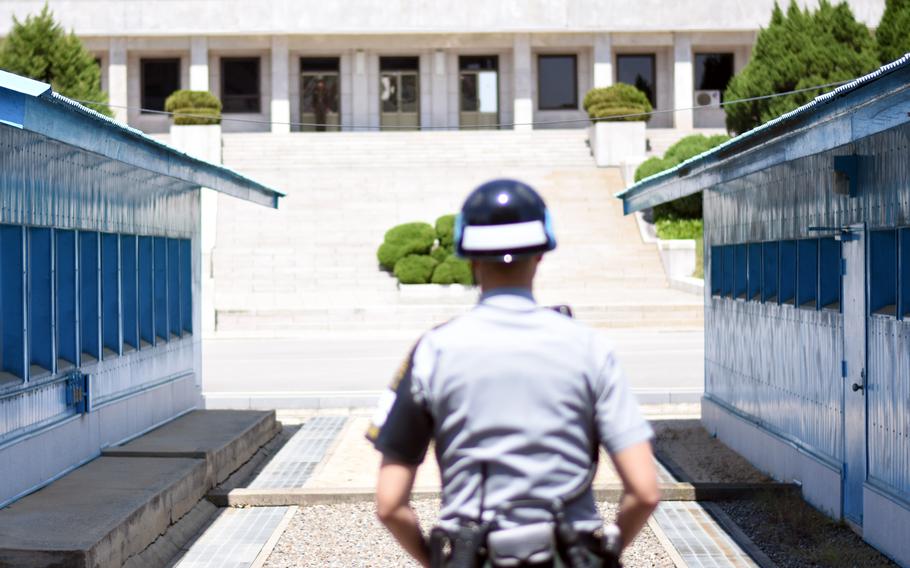 Buy Photo
North and South Korean soldiers face off at the Joint Security inside the Demilitarized Zone, May 24, 2017. (Aaron Kidd/Stars and Stripes)

South Korean government officials confirmed they were holding discussions with the United States about formally ending the Korean War, just a few months before a new administration will preside over the country.

South Korean Ambassador to the U.S. Lee Soo Hyuck brought up the subject Wednesday while briefing Korean lawmakers at the embassy in Washington, D.C., telling them that senior U.S. officials were “approaching the issue seriously and understands its rational purposefulness.”

The U.S. and South Korea technically remain at war with North Korea after the signing of an armistice agreement following the 1950-53 Korean War.

“We think it is time for consultations ... and to check inter-Korean relations or North Korea-U.S. relations at least once,” Suh told reporters at the airport Monday.

South Korea’s interest in putting a ceremonial end to the war has peaked in recent weeks. President Moon Jae-in, who has long supported the issue during his tenure, urged the signatories of the armistice agreement to “come together and declare that the war on the Korean Peninsula is over,” in a speech before the United Nations General Assembly last month.

"When the parties involved in the Korean War stand together and proclaim an end to the war, I believe we can make irreversible progress in denuclearization and usher in an era of complete peace," he said in reference to the U.S., North Korea, South Korea and China.

Kim Yo Jong, the North Korean leader’s sister and a high-ranking official within the ruling party, described the idea as “interesting” and “good.”

“We have discussed the end of war declaration ... which can be the beginning of the establishment of a system to ensure peace on the Korean Peninsula,” she said in a statement issued last month by the state-run Korean Central News Agency.

A formal end to the Korean War would mark a major political victory for Moon and the ruling Democratic Party. The president, who is limited to a single five-year term under Korean law, will step down in March.

However, an analyst on the Korean Peninsula raised some concerns over the issue.

“A step towards the direction of ending the Korean War could spell a dramatic change in regional dynamics,” Soo Kim, a policy analyst for Rand Corp. and an adjunct instructor at American University, told Stars and Stripes in an email Thursday. “It’s a short-lived political ‘success’ — and even that is questionable.”

Soo Kim said an end-of-war declaration would “mark the first of many strategic victories” for North Korean leader Kim Jong Un, whose regime frequently rails against the stationing of U.S. troops in South Korea.

“It will lay the groundwork for a peace declaration, not to mention challenge the grounds for the presence of U.S. troops on the peninsula and the U.S.-South Korean alliance,” she said.