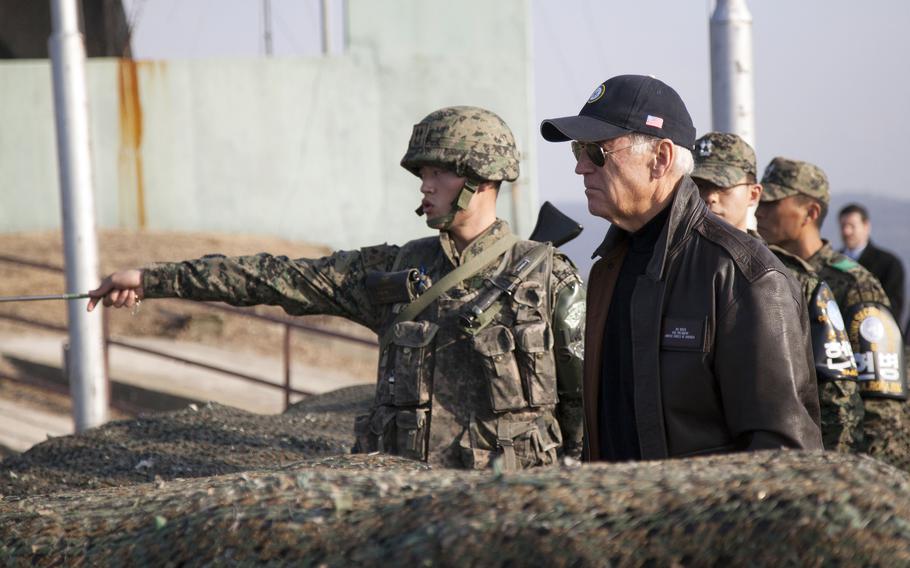 Then-Vice President Joe Biden gets a glimpse of North Korea from the Ouellette observation point inside the Demilitarized Zone, Dec. 7, 2013. (Chris Church/U.S. Navy)

The United States is open to discussing the possibility of formally ending the Korean War in an effort to achieve “the complete denuclearization of the peninsula,” the Pentagon spokesman said Wednesday.

“The United States remains committed to achieving lasting peace on the Korean Peninsula through dialogue and diplomacy with North Korea,” John Kirby told reporters during a press briefing. “We continue to seek engagement with [North Korea] to address a variety of issues.”

Kirby added that “we're open to a discussion about an end of war declaration,” but qualified his remarks by noting that the ultimate goal is to rid the peninsula of nuclear weapons.

“We know that this is a complex issue, and we're committed to supporting the role of our diplomats in having that kind of dialogue going forward,” he said.

Although the 1950-53 Korean War ended with an armistice, the U.S. and South Korea technically remain at war with communist North Korea. Wartime hostilities have ended but the North is still subjected to international sanctions due to its development of ballistic missiles and nuclear weapons programs.

South Korean President Moon Jae-in has floated the idea of formally ending the conflict throughout his tenure. Most recently, Moon renewed his call for the armistice signatories to “come together and declare that the war on the Korean Peninsula is over” during a speech before the United Nations General Assembly in New York on Tuesday.

“When the parties involved in the Korean War stand together and proclaim an end to the war, I believe we can make irreversible progress in denuclearization and usher in an era of complete peace,” he said in his speech.

Moon also broached the subject during a historic summit with North Korean leader Kim Jong Un in 2018, when the two leaders signed a document to “declare the end of war” that same year.

Formally ending the Korean War has led to some concerns among policy-watchers, particularly in light of Pyongyang’s continued development of its weapons programs. It test-fired cruise missiles and ballistic missiles this month, and evidence it restarted its nuclear reactor also came to light in August.

The “biggest beneficiary” to the war’s end would be Moon and his political party, according to professor Sung-Yoon Lee of the Fletcher School at Tufts University in Massachusetts.

“All these illusory, very promising signs would boost Moon Jae-in and his supporters’ approval rating,” Lee told Stars and Stripes in a phone interview Thursday.

Lee cautioned that formally ending the war would be “basically meaningless to the United States," adding that it may be “playing right into Kim Jong Un’s game plan."

Lee said an end-of-war declaration and a possible peace treaty with North Korea would call into question the legitimacy of the United Nations Command and the presence of American troops in South Korea. Roughly 28,500 U.S. service members are stationed on the peninsula to "deter aggression" and defend South Korea, ostensibly from the North, according to a statement from U.S. Forces Korea's website.

“Why would North Korea be so interested in another paper agreement when it has violated … virtually every single major international agreement it’s signed?” Lee said.