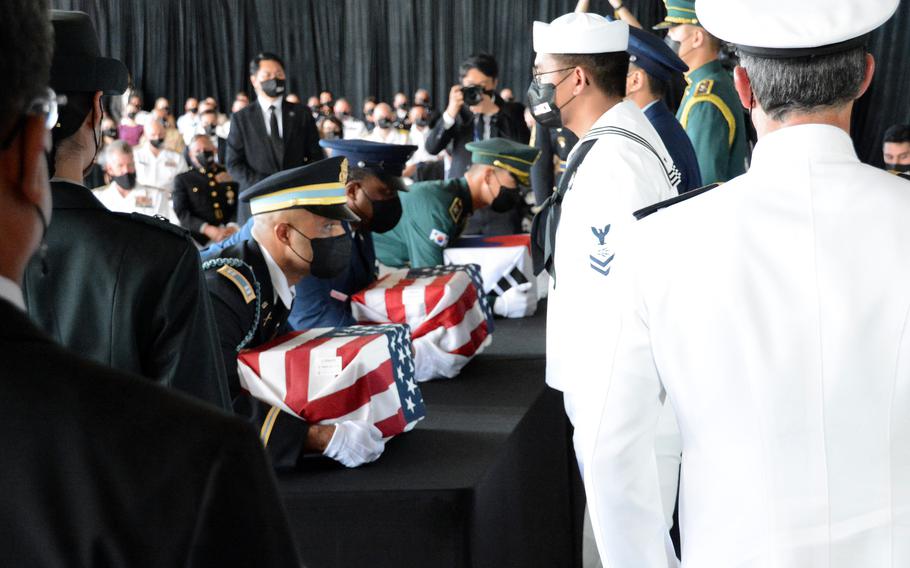 JOINT BASE PEARL HARBOR-HICKAM, Hawaii – South Korea President Moon Jae-in reiterated his desire for a formal end to the Korean War at a ceremony Wednesday in Hawaii during which the U.S. turned over the remains of 68 South Korean soldiers who died in the conflict.

At the same time, South Korea transferred the remains of six American service members unearthed from unmarked graves in recent years, making it the first joint transfer of remains between the nations.

“What our heroes wanted to see on the Korean Peninsula was a complete peace,” Moon said through a translator at the ceremony in a hangar at Joint Base Pearl Harbor-Hickam.

“At the U.N. General Assembly [Tuesday], I proposed that the relevant parties gather together and proclaim an end to the Korean War, creating a new chapter of reconciliation and cooperation,” Moon said.

“An end-of-war declaration will give new hope and courage to everyone around the world aspiring for peace beyond the Korean Peninsula,” he said.

The Defense POW/MIA Accounting Agency determined through various tests that the 68 sets of remains were not Americans. The DPAA came into possession of the remains in a number of ways. 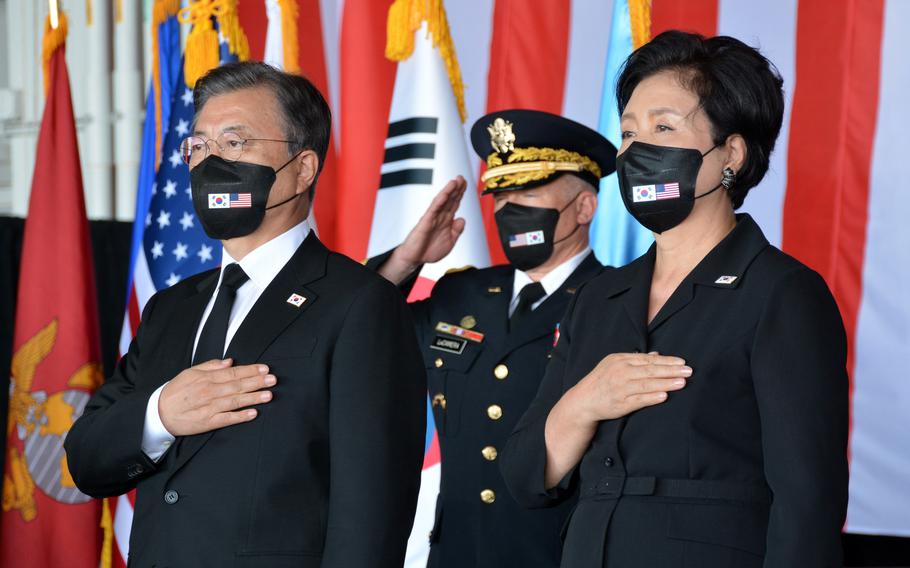 Buy Photo
Remains of South Korean soldiers killed in the Korean War are carried onto a jet for a flight to their homeland during a repatriation ceremony at Joint Base Pearl Harbor-Hickam, Hawaii, Wednesday, Sept. 22, 2021. (Wyatt Olson/Stars and Stripes)

North Korea turned over remains of 208 service members from 1990 to 1994 and transferred another 68 in 2018. Others were found during joint recovery missions from 1996 through 2005 when North Korea allowed access.

The U.S. turned over the remains of 147 South Korean soldiers in June 2020 during a similar ceremony at the joint base.

That transfer of remains was the largest ever made between the two nations, which were allied during the Korean War that began June 25, 1950, and ended roughly three years later with an armistice but no formal treaty.

“Today’s ceremony, likely the last of such magnitude, signifies the remaining 68 [South Korean] servicemen in the care of the United States of America,” Rear Adm. Darius Banaji, deputy director of operations at DPAA, said during the ceremony.

Roughly 7,500 American troops remain unaccounted for from the conflict, according to the DPAA.

Only three sets of remains were used in the transfer ceremony, during which a Korean-U.S. honor guard draped American, South Korean and U.N. flags around each box, roughly the size of a microwave.

Two of the boxes held remains already identified by South Korea’s counterpart to DPAA, the KIA Recovery and Identification agency.

Family members of the pair attended the ceremony, one a great-granddaughter who is a second lieutenant in the South Korean Army. “So today we pay tribute to all Korean War veterans, their families, as they fought in battle to protect and defend our values in the region,” Adm. John Aquilino, commander of U.S. Indo-Pacific Command, said during the ceremony.

“The Korean War brought our two nations side by side to fight for and defend the values embodied in the ideals of freedom,” he said.

“We will never forget their service or their sacrifice, as it paved the way for our strong network of alliances and partnerships that continues to secure a free and open Indo-Pacific,” he said.