Taiwan warns of tougher response if China flights get too close 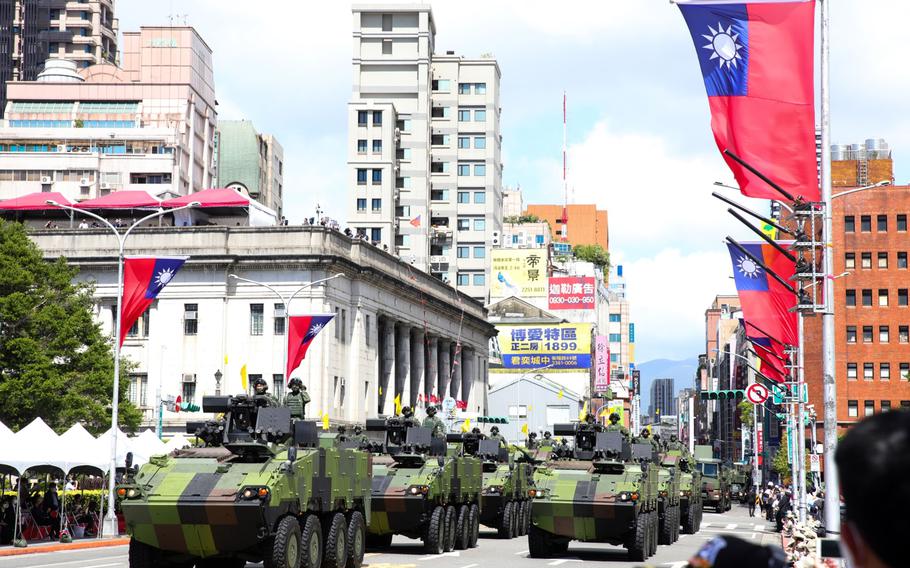 Tanks pass in front of the Presidential Office during the National Day celebration in Taipei, Taiwan, on Oct. 10, 2021. (I-Hwa Cheng/Bloomberg)

Taiwan's top military leadership warned China that the closer its aircraft and ships get to the island the harder Taipei will respond, raising the stakes for further escalation with Beijing.

Taiwan will take tougher measures to fend off Chinese military sorties should they get too close to the Taiwanese mainland, according to a report by the island's defense ministry sent to legislators and seen by Bloomberg News. Defense Minister Chiu Kuo-cheng is scheduled to present the report in a speech to lawmakers Thursday.

"In response to the intrusions by Chinese Communist military aircraft and ships into our air defense identification zone, we will adhere to the principle of 'the closer they get to the island, the stronger we will hit back,'" the report said.

Chinese state media has dismissed the idea of Taiwan retaliating, warning that any attack on People's Liberation Army Air Force planes would be met by force, or even an invasion.

"If Taiwan fires, it would mean that the Chinese mainland will launch a destructive retaliation," the Communist Party-backed tabloid Global Times wrote in an editorial last month. "Even a war to liberate the Taiwan island will start. In this context, the Taiwan military will never dare to fire at a PLA aircraft on such a mission."

Speaking to lawmakers last week, Chiu described the current state of relations across the Taiwan Strait as the most severe he'd seen in his 40-year military career. He warned China will have "full capacity" to attack Taiwan by 2025.

"We hope for an easing of cross-strait ties and won't act rashly, but don't assume that Taiwanese people will bow to pressure," Taiwan's Mainland Affairs Council said in statement Wednesday. "Cross-strait should respect each other, and solve the problem with practical dialogue."

Over the weekend, Chinese president Xi Jinping reiterated his goal of bringing the self-ruled island under Beijing's control. A day later, Tsai said that her government would do its utmost to maintain the status quo in its relations with China amid a "complex regional landscape."

"Through gray zone activities, military threats and information manipulation, authoritarian regimes aim to erode our citizens' confidence in democratic institutions," Tsai said in a video message posted to Twitter on Wednesday. "Taiwan stands on the front line of this assault and we have been working diligently to combat such coercion."

In a statement last week, Pentagon spokesman John Supple stressed the U.S. had an "abiding interest" in the peace and stability of the Indo-Pacific, including in the Taiwan Strait. "The United States will continue to support a peaceful resolution of cross-strait issues, consistent with the wishes and best interests of the people on both sides," Supple said.