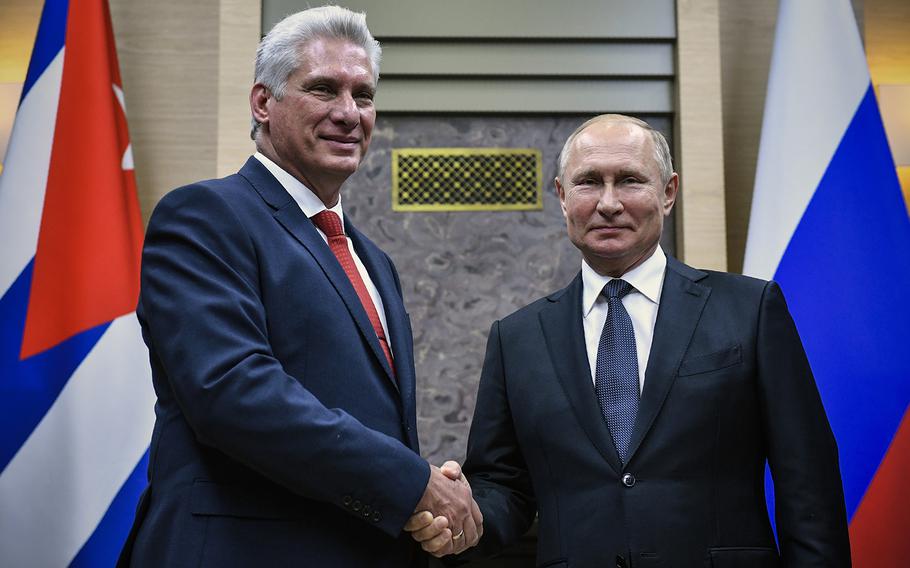 Following recent threats of a potential military deployment to Cuba earlier this month, Russia’s President Vladimir Putin discussed the “strategic partnership” and further coordination of “actions in the international arena” with Cuban leader Miguel Díaz-Canel in a call disclosed Monday by the Kremlin.

In a tweet, Díaz-Canel said the two leaders held a “cordial and fruitful telephone conversation” about “the current international situation” and the development of “future links in different spheres.”

News of the conversation comes amid rising fears of a Russian military action in Ukraine. NATO said Monday it was putting forces on standby and sending additional ships and fighter jets to Eastern Europe while President Joe Biden was reportedly considering sending troops to the region.

Cuba and Venezuela were dragged into the drama surrounding the conflict earlier this month after Russia’s deputy foreign minister, Sergei Ryabkov, told a Russian television station that he could “neither confirm nor exclude” potential military deployments to the two Latin American nations.

“I’m not going to respond to bluster in the public commentary,” Biden’s national security adviser, Jake Sullivan, told reporters at the time. “If Russia were to move in that direction, we would deal with it decisively.”

U.S. officials have said that the potential deployments have not come up during talks held between the U.S., Russia and other NATO countries.

Russia has been reinforcing its economic and military ties to the Caribbean island in the past few years. According to the Kremlin’s readout of the call, the leaders had “an in-depth exchange of opinions on bilateral cooperation in trade, the economy and investment.” Cuba’s handpicked president also thanked his Russian counterpart for the humanitarian aid supplied to fight COVID-19.