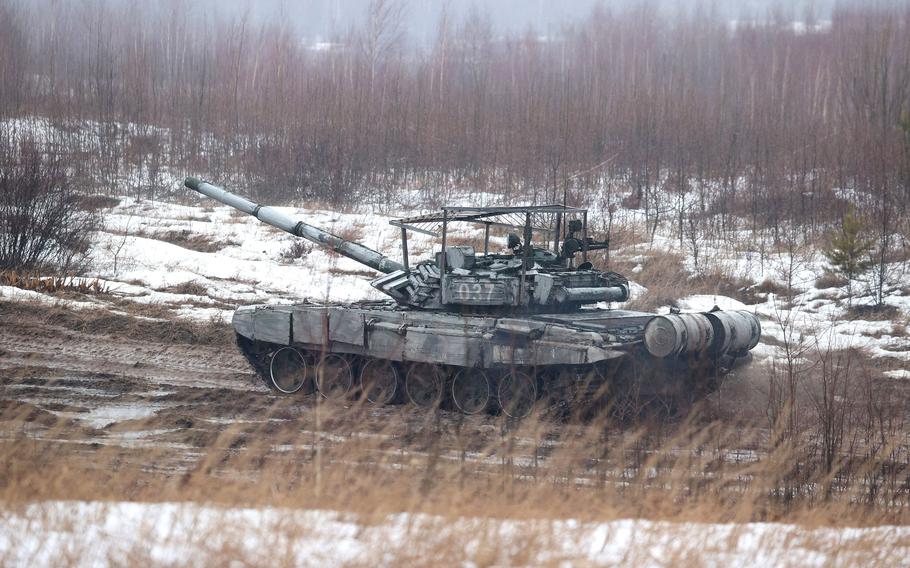 A tank moves along a field during joint exercises of the armed forces of Russia and Belarus as part of an inspection of the Union State's Response Force, at a firing range near the town of Osipovichi outside Minsk on Feb. 17, 2022. (Maxim Guchek, BELTA, AFP via Getty Images/TNS)

Vladimir Putin and his aides have long insisted that they have no intention of starting a war with Ukraine. President Joe Biden said Friday that U.S. intelligence has concluded that the Russian president has made the decision to invade.

In a larger sense, though, Putin’s current offensive against Ukraine has been underway for a while now — through proxy forces, cyberwar, economic pressure and truculent diplomacy.

Putin’s deployment of more than 150,000 troops with tanks and artillery on the border has forced Ukraine’s military — smaller and weaker than Russia’s — to mobilize. His cyberattacks have caused chaos in Ukrainian government ministries.

The fear of war has blown a hole in Ukraine’s already sputtering economy. Most private investment has stopped, commercial flights have been canceled, interest rates have soared, and the currency has fallen to a yearlong low.

All that’s on top of Putin’s seizure of the Crimean Peninsula from Ukraine in 2014 and his military aid to rebels in the eastern part of the country.

For a leader who wants to destabilize the anti-Moscow government in Kyiv, those measures count as achievements.

The threat of war has affected NATO’s behavior as well. It forced the United States and Britain to withdraw military trainers from Ukraine, fulfilling — at least temporarily — another of Putin’s aims.

It’s made the prospects for Ukrainian membership in the alliance, already modest, even more distant. And it’s compelled the Biden administration to acknowledge publicly that Russia has legitimate security interests that deserve a hearing.

It’s as if Putin had taken the advice of China’s legendary general of ancient times, Sun Tzu: The ultimate test of a strategist’s skill is to win without fighting.

Perhaps, as Biden suggested, Putin has decided to abandon that path and move to full-scale war. But if he continues to follow Sun Tzu’s advice, his next logical step might be to step up aid to the pro-Russian separatists who occupy part of eastern Ukraine.

Russian government spokesmen hinted at such a move last week when they claimed that Ukraine was carrying out “genocide” against the area’s ethnic Russian inhabitants.

There’s no evidence that such a campaign is underway, and Ukrainian officials heatedly deny it. But the accusation could serve as a handy pretext for recognizing the independence of the rebel areas, or at least sending them more weapons in the guise of humanitarian aid.

Among other benefits, such a move would give Moscow a de facto veto over NATO membership for Kyiv, since the alliance won’t want a new member that’s already locked in low-grade conflict with Russia. And that course would stop short of provoking the Western response Putin presumably fears most: the massive economic sanctions Biden and other NATO leaders have brandished.

But if Biden and the U.S. intelligence community are right, and the Russian leader has decided to invade, then he has made a different calculation: He’s gambling that the sanctions won’t be effective enough to hurt much.

Putin has worked for years to make his economy sanctions-proof, expanding his government’s foreign currency reserve to a staggering $631 billion and shifting much of Russia’s trade from Europe to China.

And if European countries apply sanctions, he can retaliate by reducing his exports of natural gas, which supply much of his neighbors’ heating fuel.

“Can you imagine German houses [going] cold in order to punish Russia?” asked Graham Allison, a Harvard scholar of international affairs. “I can’t.”

A battle over sanctions, he noted, could allow Putin to achieve another goal — using an energy crisis to drive a wedge through the NATO alliance.

The uncomfortable truth is that Putin, if only because of geography, has the advantage in this conflict. He’s willing to put troops on the ground, which makes his threats credible. The United States and its NATO allies are not.

“Militarily, Putin has the high card,” Allison said. “He has a military that can fight and win.”

The Russian leader may invade in the next few days, as Biden warned, or he may wait for another round of diplomacy to see what he can gain without war. Either way, he has an interest in keeping the crisis going.

“We’re all looking for a solution. There’s not going to be one,” Fiona Hill, a White House adviser on Russia in the Trump administration, warned.

“The Russians know that if they keep the pressure up, by hook or by crook, in their view they’ll find a way of getting what they want in Ukraine.”

Which means Putin’s confrontation with Ukraine and the West is likely to continue for a long time — whether he launches a full-scale invasion or not.