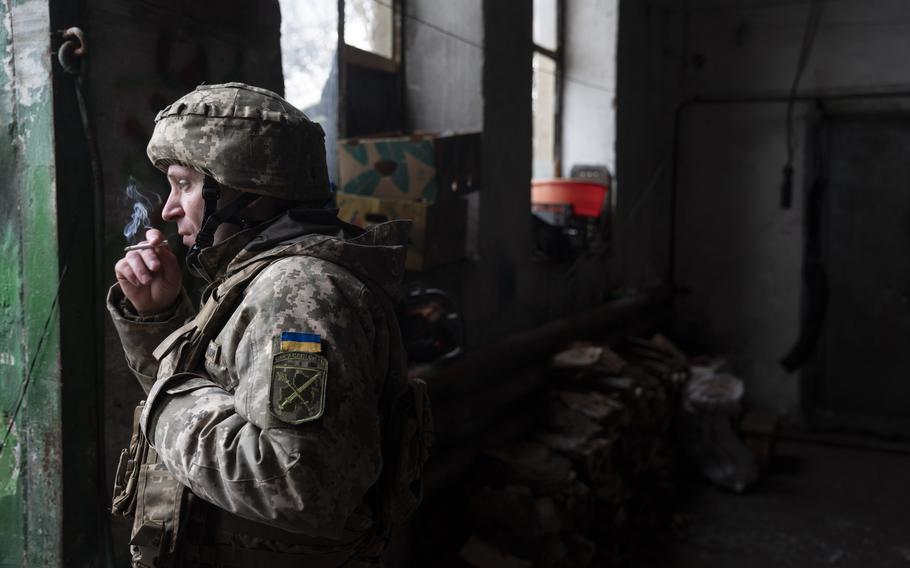 A Ukrainian soldier takes shelter from Russian-backed separatist positions that had shelled the area in Novoluhanske in the Donetsk region of eastern Ukraine. Attacks along the border of Kyiv-controlled Ukraine and the separatist regions have increased sharply. (Michael Robinson Chavez/Washington Post)

MUNICH — Ukrainian President Volodymyr Zelenskyy forcefully demanded stronger actions from world leaders as the threat of full-scale attack by Russia intensifies amid increased shelling in the eastern separatist regions of his country.

"The security architecture of our world is brittle, it is obsolete," Zelenskyy said on Saturday during a defiant speech at a security conference in Munich. He accused governments of "egotism," "arrogance" and "irresponsibility" as he urged Western leaders to publicly state their plans for sanctions on Russia, saying that after the war begins would be too late.

"Action is needed," he insisted, adding that "this is not about war in Ukraine, this is about war in Europe."

Zelenskyy's sharp rebuke of Kyiv's allies comes as the United States is sounding its most dire warnings yet about the likelihood of a resumed Russian invasion of Ukraine, and as fresh shelling prompts new turmoil — and finger-pointing — in the country's east.

Vice President Kamala Harris also made emphatic declarations at the Munich conference, vowing that Russia would see "economic measures that will be swift and severe" if it invades neighboring Ukraine.

"There is a playbook of Russian aggression," Harris told the heads of state and government, foreign dignitaries and a large delegation from the United States. "And this playbook is too familiar for us all. Russia will plead ignorance and innocence. It will create a false pretext for invasion. And it will amass troops and firepower in plain sight."

The Biden administration has ben warning of imminent attacks for days. Defense Secretary Lloyd Austin on Saturday said Russian forces "are now poised to strike," bolstering President Joe Biden's warning on Friday that Putin had "made the decision" to attack Ukraine.

U.S. intelligence that provided Biden with the confidence to make that assertion came from an order given to Russian subordinates to proceed with a full-scale attack, according to several people familiar with the matter, who spoke on the condition of anonymity because of the matter's sensitivity.

"The president's statement last night reflects the assessments of the intelligence community," a senior administration official said. "As he also made clear, the door to diplomacy will remain open."

Asked how he knew Putin's intentions, Biden noted in his remarks Friday that the United States has "a significant intelligence capability." He also said that before making his speech, he had a call with the leaders of NATO allies and the European Union "to bring them up to date on what the United States thinks is the current state of affairs and what's likely to happen in Ukraine in the coming days."

However, some high-level European officials said on Saturday that they had not seen any direct intelligence to support the conclusion that Putin had made a decision.

One European official told The Washington Post in Munich that "we have no clear evidence ourselves that Putin has made up his mind and we have not seen anything that would suggest otherwise." Another said that although the situation is grave, "at this stage we do not have such clear intelligence" that Putin has decided to invade.

Some European allies said they have been told little about the sources and methods used to arrive at the U.S. conclusions, limiting their capacity to make independent decisions about how much weight to give statements from Biden that Putin has made a decision to attack.

"It's always the raw material that they do not share," said one senior NATO diplomat who has had extensive conversations with top American policymakers in Brussels.

The British have not been among those making such complaints. In fact, U.K. Foreign Secretary Liz Truss sounded similar warnings to the United States in Munich on Saturday, asserting that Ukraine's "worst-case scenario" — a Russian invasion — "could happen as early as next week."

Russia has also increased its saber-rattling, launching hypersonic missiles on Saturday as part of an exercise of nuclear forces overseen by President Vladimir Putin in a show of military strength. The display serves as an overt reminder to Western leaders of Russia's status as a nuclear power and comes as the world grapples with the possibility of a land war in Europe.

Ukraine's leader did not directly address the matter of intelligence, but he expressed impatience with predictions such as Biden's nonetheless. "We don't need to be reminded of the dates of plausible intervention," Zelenskyy said during his speech to the Munich conference, adding that "we're going to protect our country" regardless of when Putin attacks.

"I don't know what the president of the Russian Federation wants," he later added during an interview onstage at Munich in which he invited Putin to meet with him. He coupled that invitation with a warning, however, that the troops Putin had built up along the border were on the lookout for any exploitable provocation, and that "one shelling, one cannon fire, can lead to war."

The Post reported this past week that the United States received intelligence that Russia's announced military pullback from Ukraine's border was a deliberate ruse to mislead the West. Biden and NATO's secretary general warned that they saw no evidence of a pullback.

Since then, independent watchers have recorded a sharp uptick in attacks along the border of Kyiv-controlled Ukraine and the regions under the authority of Russian-backed separatists. The Organization for Security and Cooperation in Europe recorded over 1,500 cease-fire violations, "including explosions," in the Donetsk and Luhansk regions of Ukraine on Friday, approximately double what they recorded the day before. The increased attacks have fueled fears that Russia is trying to craft a false pretext for war, by blaming Ukraine for attacks and using that to justify an invasion.

Earlier this week, Putin accused Ukraine, without presenting evidence, of fomenting "genocide" against people in separatist-controlled Ukraine, while residents of those regions began evacuating to Russia. On Saturday, Russian foreign ministry spokeswoman Maria Zakharova said Ukraine was committing "crimes against humanity" and accused the West of being "accomplices." Western leaders in Munich denounced such charges as "ridiculous."

Chinese Foreign Minister Wang Yi, speaking to the Munich conference via video link, did not comment on the buildup of Russian forces Saturday. But he insisted that implementing the Minsk agreement — an accord struck in 2015 to settle hostilities in eastern Ukraine — was the "only way out" of the current crisis, according to the Chinese state broadcaster CCTV. Without naming the United States, Wang criticized "certain major countries" of "hyping up issues, creating panic and trumpeting the threat of war."

Zelenskyy, too, urged Western leaders to spend less time warning Kyiv about the number of Russian troops on Ukraine's doorstep, and to instead break their "silence" about how their nations planned to respond. Speaking to CNN in Munich, Zelenskyy called on the United States and Europe to articulate what sanctions they would impose upon Russia, to serve as a deterrent.

But the Biden administration has been reluctant to articulate its planned targets with such specificity. The administration has hinted that sanctions would target at least some of Russia's larger state-owned banks; restricting Russian exports also remains a potential tool. Meanwhile, Congress's attempts to articulate the gamut of measures via legislation effectively ran aground this past week over a dispute between the parties about what sanctions ought to be imposed immediately, as opposed to in the event of an invasion.

Later on Saturday, Ukraine announced that a shipment of rifles, machine guns and other military equipment had arrived in Lviv. The United States has also sent Ukraine other weapons in recent months.

But Zelenskiy asked for greater commitments, daring Western leaders to "be honest" about when they planned to incorporate Ukraine into their alliances and step up to its defense.

"If not all the members are willing to see us there [in NATO], or all members don't want to see us there, be honest about it," Zelenskiy said, committing to defend his country with or without help. "Open doors are good, but we need open answers, and not the years and years of closed questions."