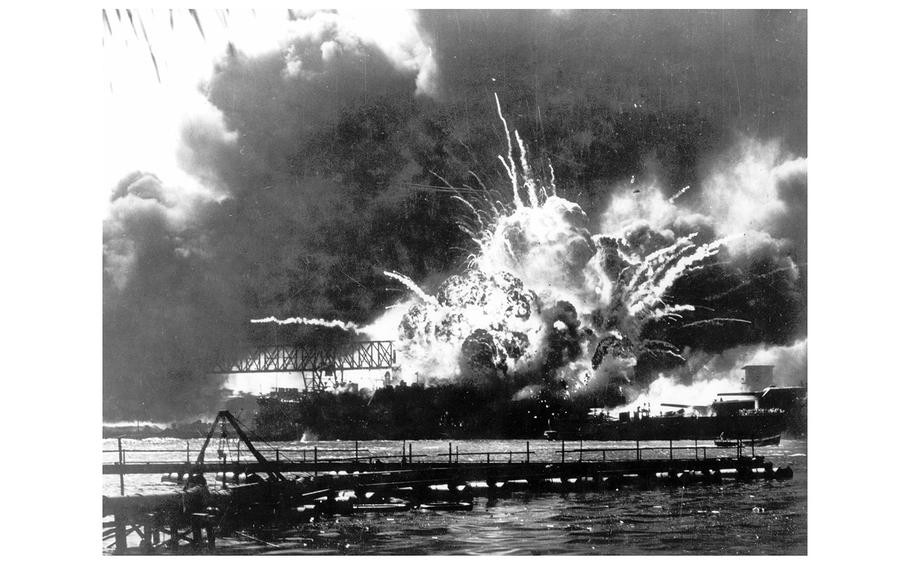 The destroyer USS Shaw explodes after being hit by bombs during the Japanese surprise attack on Pearl Harbor, Hawaii, on Dec. 7, 1941. (U.S. Navy)

SACRAMENTO, Calif.  (Tribune News Service) — Toni Gibson was eating breakfast with her parents in their Honolulu kitchen when she heard the noise. She was only 10, but she turned to her father and said, "It sounds like a bomb."

It was just before 8 a.m. on Dec. 7, 1941, and one of her parents switched on the small radio that sat on their kitchen counter. The Hawaii Calls announcer confirmed the little girl's fears: This was no exercise. Pearl Harbor was under attack.

Toni's father, Frank Gibson, worked for the Dole pineapple company, and he was called in to the factory to help put out a reported fire. The child and her mother, Helene, stayed in the house all day, terrified. The rest of the day was a blur of fear.

Not long after Frank returned from the factory, he covered all the windows that looked out onto their lush tropical garden with black tar paper. Toni would find out that 2,335 service members and 68 civilians were killed in the surprise Japanese attack. America was at war.

Eight decades after the attack, Toni Gibson — now Toni Bone of Greenhaven — is among the few Americans with firsthand memories of that " date which will live in infamy." Dec. 7 would reshape her family and scar her older brother forever.

But at 91, Toni recalled that when she was a child, she couldn't really process everything that was going on.

"I was 10 years old," she said. "The ramifications of entering into war were not as they would have been for my parents."

She liked to go rollerskating with her friends, which was the only time she'd ever wear shoes. She liked to scramble through the forest and swim under a nearby waterfall. Yes, she knew that war was raging in Europe, largely from listening to the news with her parents every night on the big radio in their living room. But that seemed very far away before the explosions started.

Her brother, Frank Jr., who was away at college in Washington state, immediately dropped out and enlisted in the Navy. Little Toni stayed in Hawaii and lived with persistent fear.

Her parents and their friends, she said, were "sure that with the devastation of Pearl Harbor, that the Japanese would invade the islands."

Her father dug a trench in their backyard among the fruit trees and covered it with old mattresses. It was basically a dark hole in the dirt with a small handmade bench. 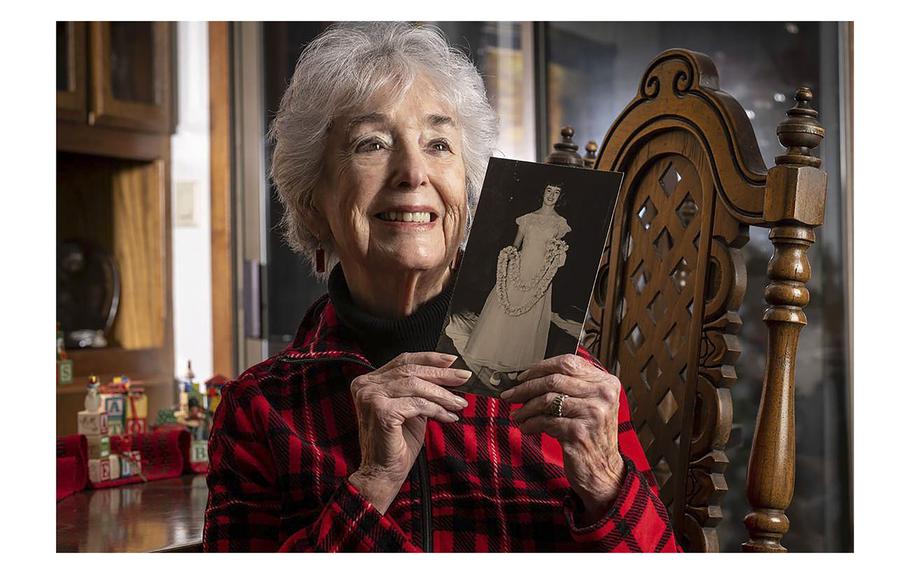 Toni Bone, 91, holds a photo Tuesday, Dec. 6, 2022, at her home in Sacramento of herself when she was younger and lived in Hawaii. She lived in Honolulu, Oahu during the attack on Pearl Harbor. “The sound of the explosions coming from Pearl Harbor was very alarming and scary,” she said. (Hector Amezcua/The Sacramento Bee/TNS)

Half a dozen times, she recalled, the family would cower in that makeshift bomb shelter when air raid sirens went off. All false alarms. All terrifying.

On one occasion, the adults rushed to the trench when the siren started blaring. Toni stayed outside, barefoot, chasing Lemoi the cat to make sure she got into the bomb shelter, too. Her parents were furious.

For a child living in Mānoa, Pearl Harbor was at once a scary world historical event and a personal heartbreaker. Toni had been so excited to finally perform in the sixth-grade Christmas pageant on the last day of the semester.

"From the first grade on, I'd seen this pageant, and I thought it was so beautiful," she said. The singers wore white robes and carried lighted candles. "I was to be in the choir and carry this candle," Toni said. "And I was so looking forward to it."

But after the attack, all classes at Punahou School were canceled, and the pageant never happened. Instead, Toni's mother brought her to get fingerprinted and to pick up an official ID card and a gas mask that fit in a cumbersome khaki case. Toni said she carried the card and the mask with her everywhere until the war ended in 1945.

Still, the war didn't seem particularly close to home until she saw what it did to her brother.

"When my brother finally came home from the South Pacific, then it became more real to me: The horrors of the war," she said. She grew closer with Frank Jr., who became an attorney, in the years before his death in 1990. "Unfortunately, (the war) stayed with him. He probably would have been diagnosed with PTSD, if it had been available in 1945."

Robert Bone was drafted into the Army, proposed to Toni in a letter, and married her on his first leave in 1951; the next year, after his discharge, they moved to Sacramento, where they raised their three children, Kirk, Geoff and Jody.

Living in Greenhaven some 2,400 miles away from her childhood home in Honolulu, Toni said that Pearl Harbor still haunts her in peculiar ways. She was in Sacramento during the 1973 Roseville Yard Disaster, when a shipment of bombs inadvertently detonated.

When she heard that noise, she said, "I knew exactly what it was."