Ira Schab, 102, who was a musician aboard the USS Dobbin during the Dec. 7, 1941, attack on Pearl Harbor, awaits the beginning of a commemoration of the event at the Pearl Harbor National Memorial, Dec. 7, 2022. (Wyatt Olson/Stars and Stripes)

PEARL HARBOR NATIONAL MEMORIAL, Hawaii — On the morning of Dec. 7, 1941, Robert Lee had a panoramic view of what appeared to be hell on Earth.

The 20-year-old Oahu native was sleeping in that Sunday morning after a late night out with friends, when he was startled out of bed by the sound of explosions.

He lived with his father, a Navy employee, and mother in a hillside home overlooking Pearl Harbor, where much of the Pacific Fleet was moored.

“I woke to the sound of anti-aircraft fire,” Lee, 101, recalled Wednesday as he sat awaiting the start of a ceremony at the Pearl Harbor National Memorial commemorating the 81st anniversary of Japan’s surprise attack on Oahu.

“As soon as I looked out my window, I could see the Japanese aircraft dropping torpedoes,” he told Stars and Stripes. “Those torpedoes went across the channel to strike the ships that were tied up along Battleship Row.”

Lee saw the battleship USS Oklahoma as it slowly capsized, with 429 of its crew perishing.

The hull of the USS Arizona glowed molten red from the detonation of its magazine below decks before it sank, Lee said. The death toll on the Arizona, now a memorial resting on the channel bottom, was 1,177 sailors and Marines. Nine survivors of the 1941 attack on Pearl Harbor sit in the front row for the commemoration of the event at the Pearl Harbor National Memorial in Hawaii, Dec. 7, 2022. (Wyatt Olson/Stars and Stripes) 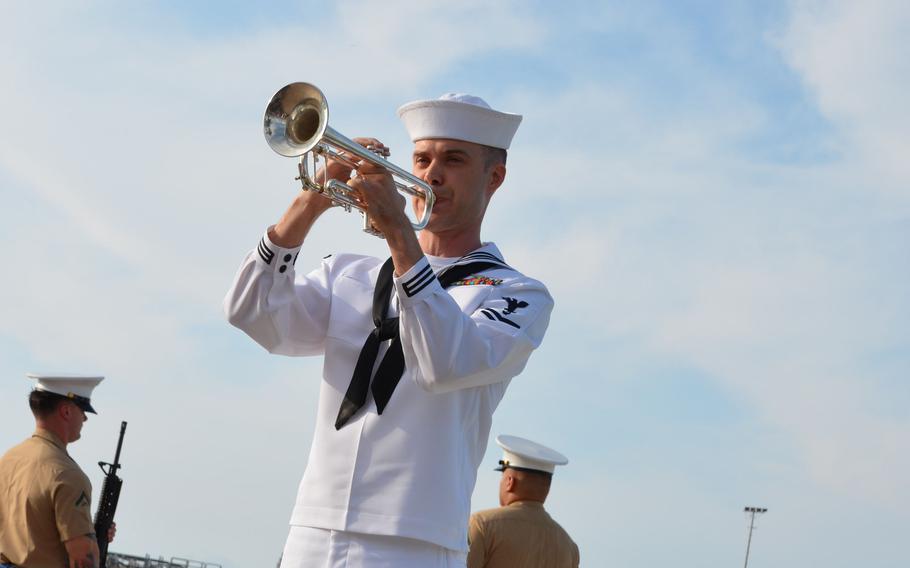 A sailor plays taps during a ceremony at the Pearl Harbor National Memorial, Dec. 7, 2022, marking the 81st anniversary of the surprise attack. (Wyatt Olson/Stars and Stripes)

Ira Schab, 102, a musician temporarily assigned to the USS Dobbin, a destroyer tender moored at Ford Island, recalled that he and other members of the band were getting ready to play for the raising of the colors.

Schab and Lee were among only nine survivors of the surprise attack to attend the ceremony. Fewer than two dozen other World War II veterans joined them.

For almost all the other roughly 2,500 people attending the ceremony, the sights, sounds and terrors of the surprise attack can only be imagined.

Rear Adm. Stephen Barnett, commander of Navy Region Hawaii, urged the audience to do just that during a brief address before the harbor and the USS Arizona Memorial.

“Ladies and gentlemen, how very appropriate it is that this ceremony is conducted right here in the contemplation circle of the beautiful grounds of the Pearl Harbor National Memorial,” he said.

“From this vantage point, you can see much of the historic harbor right behind us,” Barnett said. “We can try to imagine what it must have been like 81 years ago, to stand on the shore of Pearl Harbor as destruction rained down on the ships of the mighty Pacific Fleet.”

Lou Conter, one of only two still-living survivors of the Arizona, addressed the audience in a prerecorded video message.

“I had hoped to be with you in Honolulu for this 81st commemoration, but my 101-year-old legs are not what they used to be,” said Conter, who until recent years had been a fixture at the annual ceremonies.

“I have been back from many commemorations, and each time I am on the Arizona Memorial, I take a moment to view the names of my shipmates and thank God for their ultimate sacrifices,” he said.

History is vital and important, said Conter, who seemed mindful of how few survivors like him remain.

“We need to make future generations understand what Pearl Harbor really was about and what was at stake,” he said. “Our schools need to teach more than a paragraph on Pearl Harbor.”

Earlier in the day, at a ceremony at the National World War II Memorial in Washington, D.C., Adm. Christopher Grady, vice chairman of the Joint Chiefs of Staff, told the audience that the day of the attack “defined a generation – and, indeed, Dec. 7, 1941, is a day that changed the course of history." 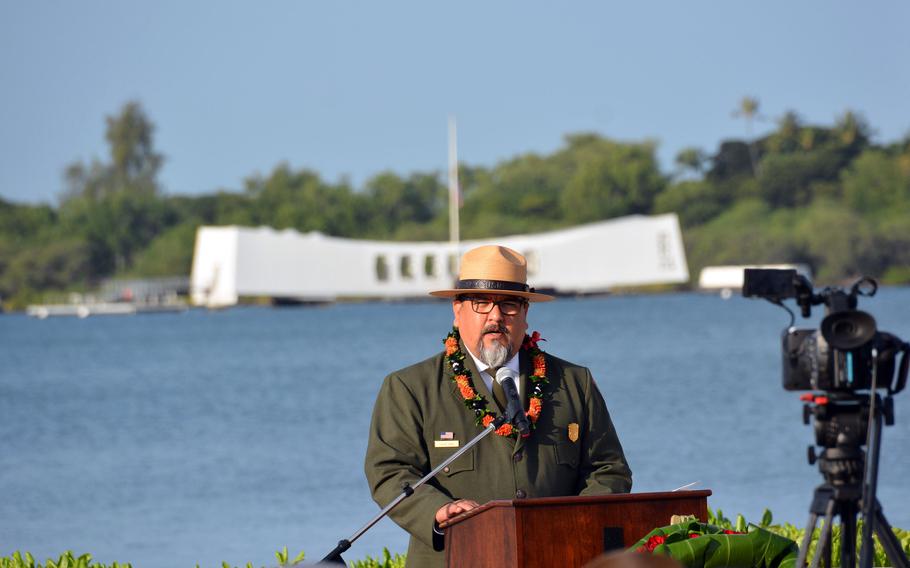 Charles Sams, director of the National Park Service, speaks Dec. 7, 2022, during a ceremony at the Pearl Harbor National Memorial commemorating the 81st anniversary of the attack on Pearl Harbor, with the USS Arizona Memorial behind him. (Wyatt Olson/Stars and Stripes) 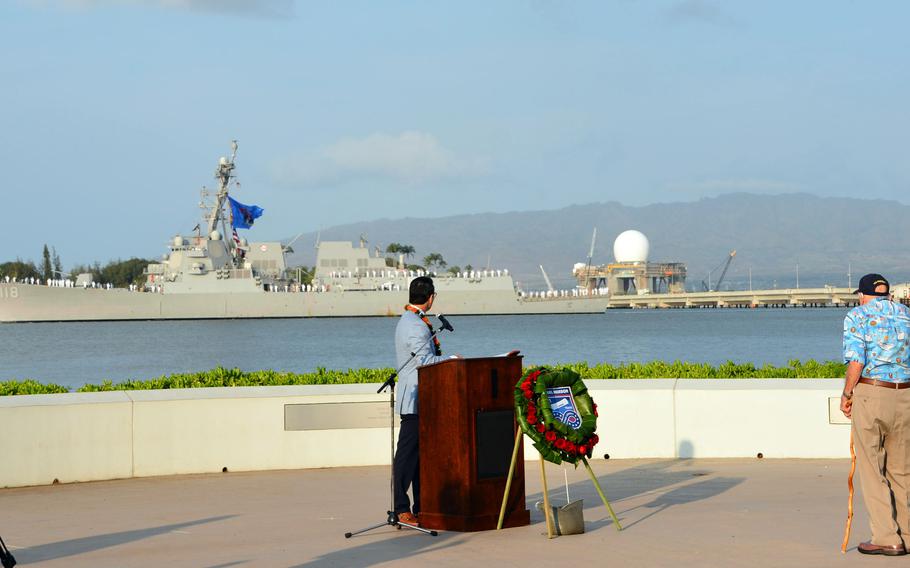 Charles Sams, director of the National Park Service, told the Hawaii audience that the first-person accounts of survivors have “added power and meaning to this site in a way that no one else can.”

“I challenge you to carry the Pearl Harbor legacy forward, sharing the stories of valor and sacrifice with your friends and family and instilling a sense of respect and inspiration in future generations,” Sams said to those too young to have lived through World War II.

“That's how we keep the everlasting legacy of Pearl Harbor alive and continue to honor those whose lives were lost so many years ago,” he said.