(Tribune News Service) — As the USS Abraham Lincoln sailed into San Diego Thursday, Aug. 11, with two destroyers in tow and some 6,000 sailors and Marines aboard, it marked the completion of a U.S. military first: Navy Capt. Amy Bauernschmidt has now completed her first mission as the first woman to command a U.S. aircraft carrier.

The nuclear-powered aircraft carrier left for a routine deployment to the Indo-Pacific region — generally ranging from the Philippines to the South China Sea — on Jan. 3. Over the next eight months, the USS Abraham Lincoln and the other ships encountered everything from the Chinese military to whale-awareness training.

For the Marines, the exercise also included the first deployment of F-35C fighters aboard an aircraft carrier. The plane is widely viewed as an innovative weapon capable of both military and intelligence operations.

In a phone call from aboard the Lincoln, just a day before the strike group returned to Naval Air Station North Island in San Diego, Bauernschmidt noted her accomplishment and spoke about the mission.

“I don’t think there is any greater responsibility than taking over an aircraft carrier and being responsible for 6,000 Marines and sailors,” she said.

She described the crew — with an average age of 21.8 years old — as the backbone of the strike group’s success and said they should be credited for their accomplishments. Bauernschmidt also threw credit to commanders aboard the other ships in the group and the support she got from them.

“I woke up every day with a smile on my face knowing I’m driving this incredible warship,” she said.

“What (sailors and Marines) did mattered,” Bauernschmidt added. “And their hard work made the difference.” 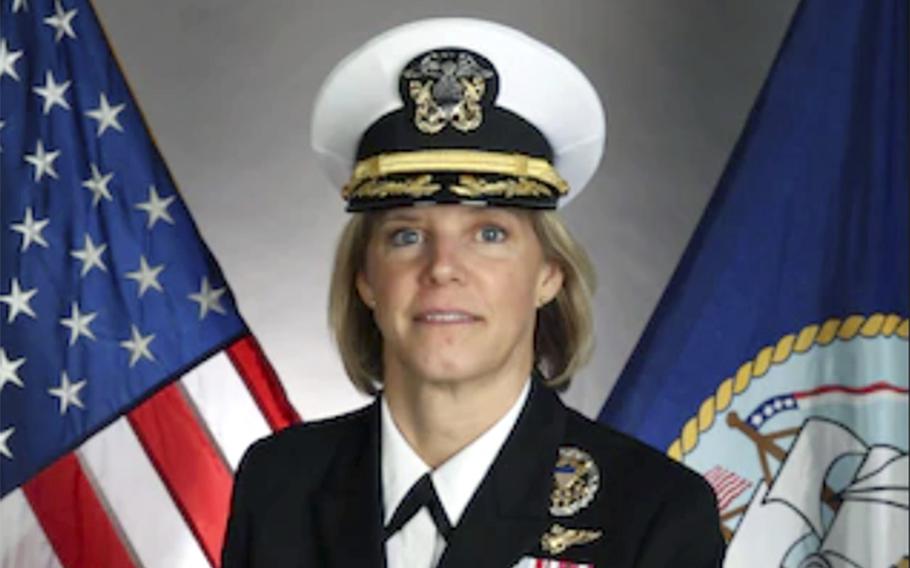 Even when the F-35s were grounded (to check on possible issues with the pilots’ ejector seats) the strike group didn’t miss a beat. The Air Force first discovered the problem in April and in late July and August, all military F-35s were grounded.

“We had the right people and parts,” she said. “There was no impact to the warship at all.”

The F-35s are known for their weapons systems and are being heralded as the jet fighter of the future. Bauernschmidt views that description as apt.

“The situational awareness (the F-35s) were able to provide was incredible,” she said.

The USS Abraham Lincoln was accompanied by the destroyers the USS Mobile Bay, USS Fitzgerald, USS Gridley, USS Sampson, and USS Spruance. The Mobile Bay and Spruance are homeported in San Diego, while the Gridley and Samson returned to Washington state Thursday. The Fitzgerald is expected to sail home back to San Diego in the next few months, U.S. 3rd Fleet officials said.

The strike group — which collectively was commanded by Rear Adm. J.T. Anderson — sailed over 65,000 nautical miles. During that time it helped with freedom of navigation and the free flow of commerce on the seas. It also participated in international exercises Noble Fusion, in February, and Jungle Warfare, in March. In both exercises, sailors and Marines trained with the Japanese Self-Defense Force. In late June and July, the strike group participated in Exercise Rim of the Pacific, a joint training venture that included 26 nations.

In the South China Sea — among the most heavily navigated waters in the world — the Lincoln strike group joined the Carl Vinson Carrier Strike Group to demonstrate the U.S. Indo-Pacific Command’s ability to deliver a powerful maritime force. Combined, those ships carried 14,000 sailors and Marines.

While near China, in January, February and March, the ships were frequently shadowed by Chinese warships, Bauernschmidt said.

Though the shadowing isn’t unusual there was no report of a threat or a fear of military escalation, the contact came during a year when tensions between China and the United States are comparatively high. It’s unknown how close the Chinese ships were away from U.S. military vessels.

Bauernschmidt characterized the interaction with the Chinese as “safe and professional,” adding that “mostly they shadowed our ship just like they shadow any ship that operates in that area.” She said some of the strike group’s aircraft also had some interaction with Chinese aircraft but it “remained safe and professional every time we interacted with them.”

The mission, she added, “demonstrated to countries in the region that we support them and their international rights.” The crew “directly contributed to the preservation of the freedom of navigation and free flow of commerce in the region. What they did matters, and their hard work made the difference in the region and for our nation.” 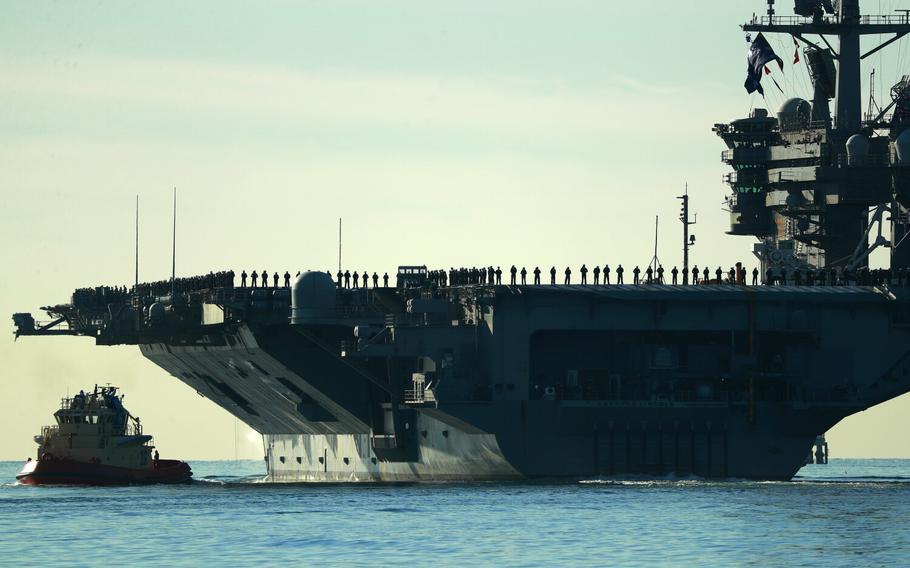 Though it was her first command aboard the carrier, Bauernschmidt said she didn’t spend much time posing for pictures and kept the deployment “all business.”

She called the future for women in the Navy “bright” and added that the Navy was already ahead of other service branches in bringing women into combat and command roles.

The mission also included training that was more about animal and environmental protection than the military.

While the ships were off Hawaii and Southern California, the sailors under Bauernschmidt’s command participated in an international exercise aimed at raising awareness about how to protect marine mammals.

The waters where they were sailing are home to many species of whales, dolphins, sea turtles and other marine life. Last year, four whales in the area were struck by U.S. and Australian military vessels. And, in June, Navy officials asked the National Marine Fisheries Service for some wiggle room in a deal they’ve struck over training in the Pacific Ocean, saying it would be hard to guarantee that Navy ships might not hit another whale before the agreement runs out in late 2025.

As part of new protocols enacted after those whales were killed, the Navy put its sailors through more training to recognize the presence of marine animals and avoid them.

“We have environmental considerations in everything we do,” Bauernschmidt said. “We have multiple lookouts, and we record any marine mammals we see.”

Bauernschmidt called the overall mission a success. She said despite growing tension over China and its interaction with Taiwan, she would have no concerns about returning to the area.

“If I was out there right now, I’d have no more concerns than I had before,” she said.

Speaking on behalf of the strike group, Rear Adm. Anderson said the deployment underlines the importance of the U.S. relationship with its allies.

“Throughout the Indo-Pacific, it is clear how significant our relationships are with our allies and partners and how impactful every single Abraham Lincoln Carrier Strike Group Sailor and Marine has been since we departed in January,” he said.