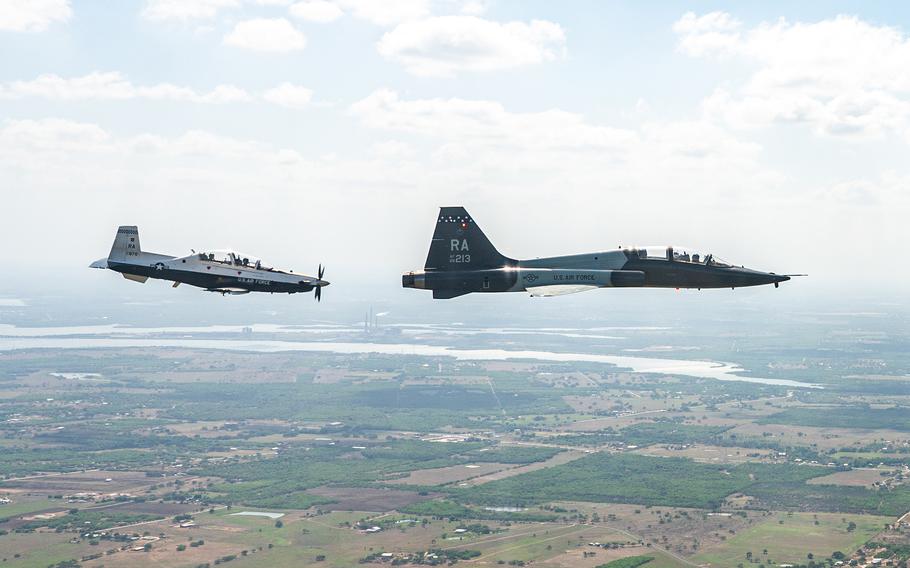 A T-6 Texan II and a T-38C Talon with the 12th Flying Training Wing fly in formation during The Great Texas Airshow in April 2022, at Joint Base San Antonio-Randolph, Texas. The Air Force has grounded 279 trainer airplanes due to concerns about potentially faulty ejection seat parts. (Tyler McQuiston/U.S. Air Force)

The Air Force has temporarily sidelined nearly half of its combat training aircraft and a smaller portion of its primary training aircraft while it reviews the safety of a potentially defective ejection seat part.

It’s the same component the Navy and Marine Corps are concerned enough about that they’re replacing it in some airplanes, such as Super Hornets and Growlers, the Navy announced earlier in the week.

That equates to about 40% of the T-38 fleet and about 15% of the T-6 planes in the Air Force inventory, the San-Antonio Express News reported. Fighter and bomber pilots train on the supersonic T-38, while the turboprop two-seat T-6s are used to teach basic flying skills.

The aircraft are assigned to Air Force undergraduate training bases and Naval Air Station Pensacola, Fla., which trains aviators from all branches of the military.

The issue triggering the grounding involves a cartridge-actuated device, or CAD, a component that’s activated when aviators pull the ejection handle or deploy a parachute.

The Navy and Marine Corps are replacing the CAD in aircraft equipped with the potentially defective part, the Navy announced Tuesday.

Planes affected include the F/A-18B/C/D Hornet, F/A-18E/F Super Hornet, E/A-18G Growler, T-45 Goshawk and F-5 Tiger II, the Navy said. But officials would not say how many planes are involved, what the defect is and whether any jets had been grounded.

The Navy said it was notified of the potential defect by vendor Martin-Baker, a British manufacturer of ejection seats.

When the seat clears the airplane, “explosives deploy the parachute,” the official said.

The T-6 uses a more lightweight ejection seat, also designed by Martin-Baker, which produces the ejection seat for the F-35 Lightning II fighter jet as well.