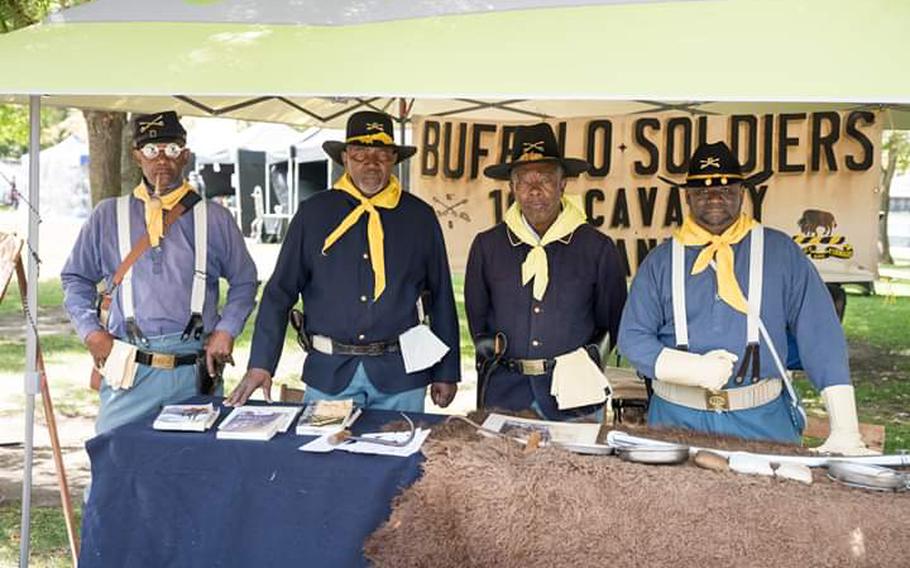 VACAVILLE, Calif. (Tribune News Service) — When Bill Terrell dons the uniform, joins his horse-mounted colleagues, and educates young people about the history of the Buffalo Soldiers, he's not only bringing little-known history to light, he's carrying on a legacy.

Terrell, 72, is the son of an actual Buffalo Soldier, the late Warren C. Terrell. Not one of the originals who captured cattle thieves and protected the U.S. mail in the 1800s, but one of the segregated horse cavalry stationed in Ft. Riley, Kan., during World War II.

Every time he buttons up the uniform, "I'm feeling kind of proud ... nostalgic ... the pride," Terrell said. "The heritage of the Buffalo Soldiers ... feeling proud of what they accomplished, what they're remembered for. It makes us proud to wear that uniform."

Terrell is joined by six or so other troopers in uniform on Oct. 2 at Vacaville's Pena Adobe Park, sharing information about the Buffalo Soldiers and their importance to U.S. history.

Educating those of all colors about the Buffalo Soldiers is important, says Terrell.

"It's the history, the heritage, the legacy," he said. "It's our nation, it's our country, both Black and white."

Terrell said by phone earlier this week that he was "probably in (his) 20s" when he learned about the history of the Black troops.

"My father was a Buffalo Soldier but he didn't talk much about it," Terrell said. Eventually, Pops Terrell opened up.

"He talked about it while we're watching TV and it would be the cavalry vs. the Indians," said Terrell. "And how they're riding their horses, firing weapons, shooting the Indians. He said 'That didn't happen.' If you're shooting behind your horse's ear, it would stop and throw you 20 yards."

The elder Terrell talked about the camaraderie and the pride the soldiers felt, his son said.

Often provided "lesser equipment than some of the white soldiers, they took pride in their assignments. They were honored to be in the U.S. military and being Buffalo Soldiers," said Terrell.

When the American-Indian Wars ended in the 1890s, the Buffalo Soldiers went on to fight in Cuba in the 1898 Spanish-American War, participate in General John J. Pershing's 1916-1917 hunt for Mexican revolutionary Pancho Villa, and even act as rangers in Yosemite and Sequoia national parks.

The Buffalo Soldiers had the U.S. Army's lowest rates of desertion and court-martial, according to Brittanica.com. From 1870 to 1890, 14 Buffalo Soldiers were awarded medals of honor, the Army's highest award for bravery.

He often imagines what his father went through riding his horse during WWII, "especially when I go on a ride more than an hour," Terrell said. "You can imagine what they went through during field exercises of six to eight hours, riding McClellan saddles which are not built for comfort."

Carrying on the Buffalo Soldier is an obligation, believes Terrell.

In 1948, President Harry Truman issued an executive order eliminating racial segregation and discrimination in America's armed forces. The last all-Black units were disbanded during the first half of the 1950s. The nation's oldest living Buffalo Soldier, Mark Matthews, died at age 111 in Washington, D.C., in 2005.

It was "most definitely" a positive experience for Terrell's father.

"Back then — right after slavery and even long after that — there weren't a lot of jobs available for African Americans," said Terrell.

Warren Terrell spent 52 years in federal service, retiring from the military after 30 years, followed by 22 years with the U.S. Postal Service.

"Because of the military, some of the best things happened to him," Terrell said. "It gave him security for his family, medical supplies, education."

Terrell was able to join his father at "10 or 20" Buffalo Soldier reunions, acknowledging the father-son bonding moments.

The reunions "are what got me excited" about the history, Terrell said. "Seeing the old-timers he (Warren Terrell) served with. Listening to some of the stories inspired me."

Warren Terrell was stationed at Travis Air Force base when Bill Terrell was born. When Bill was 2, the family moved to a small community in Richmond.

Bill Terrell went to Vietnam and, following college, took a job in San Jose before "finding a nice community to raise a family" in Sacramento.

That was 42 years ago. He has three adult children and twin grandson and granddaughter who are members of the Junior Buffalo Soldiers.

Warren Terrell died in 2004 at 84, but his son continues promoting the legacy of the Buffalo Soldiers, admitting he can't do on a horse what he used to. And "if I can't ride a horse, I can always share the knowledge that I have with the younger troopers, with Junior Buffalo Soldiers," he said. "I hope to continue until I'm no longer here."