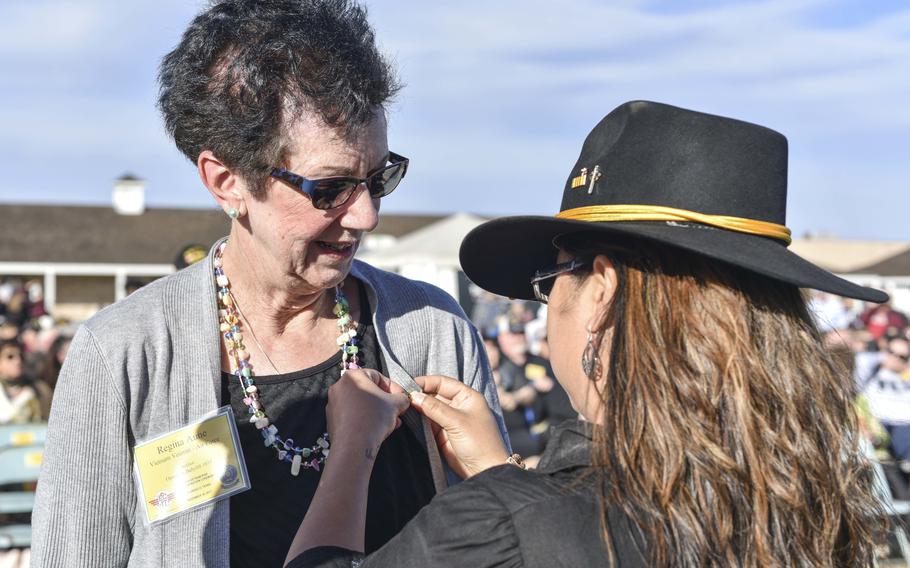 U.S. Air Force retired Col. Regina Aune receives a Vietnam veteran lapel pin from Aryn Lockhart, 17th Training Wing Public Affairs visual information specialist, during the 50th Vietnam War Commemoration at the Fort Concho parade ground in San Angelo, Texas, Nov. 18, 2017. Lockhart was one of the babies from Operation Babylift who survived a plane crash and was adopted and raised in Northern Virginia. In 1997, not long after graduating from Virginia Tech, she began investigating her life story, hoping to write about it. She typed “Operation Babylift” into the nascent Internet and found an article recounting Aune’s heroism, which had resulted in her receiving the prestigious Cheney Award for valor from the Air Force. (Randall Moose/U.S. Air Force)

It was early April 1975 in Saigon, the final days of the South Vietnamese collapse in a ruinous war, and crying women were handing orphaned babies to Regina Aune.

“It was just total chaos,” Aune recalled in an interview. “There was so much desperation.”

Aune took one baby after another onto a military cargo plane, their caretakers wailing as the children disappeared into the fuselage and a new life.

The screaming babies, the anguish — it all came back to Aune watching the chaos unfold at the Kabul airport in Afghanistan, where thousands of Americans and Afghani citizens have boarded planes bound for anywhere but there.

One image shown over and over was especially gut-wrenching — a baby being passed to a Marine over a barbed-wire lined wall.

“It just immediately brought back memories of images embedded in my mind — of mothers handing babies to strangers, literally strangers, to get them to safety,” Aune said.

But like the bombing at the Kabul airport that left 170 dead, including 13 U.S. service members, Aune’s operation on April 4, 1975, also turned tragic and deadly.

What happened next was a remarkable episode of heroism that led, decades later, to an extraordinary friendship.

April of 1975 was the beginning of the end for America’s long and disastrous involvement in the Vietnam War. 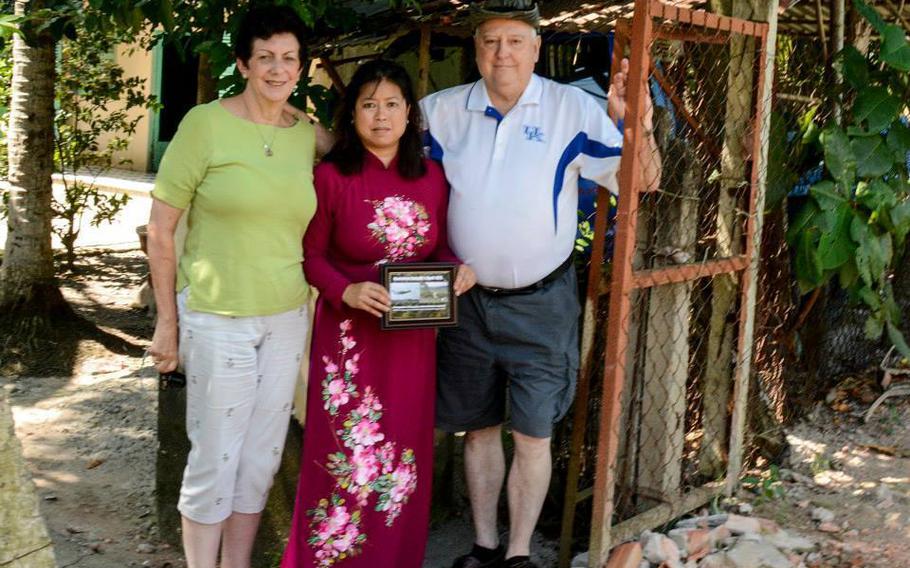 By the end of the month, the North Vietnamese would take control of Saigon. But in between, the Ford administration launched a series of complicated and often harrowing missions to extract U.S. military members, American citizens and Vietnamese allies.

The first sanctioned mission was Operation Babylift, an effort to transport thousands of babies and young children out of Vietnam on dozens of flights.

“I ordered American officials in Saigon to cut through any red tape that might stand in the way of the children’s escape,” Ford later wrote in his presidential memoir. “Then I told our Air Force to begin those mercy flights as soon as possible. Everyone suffers in a war, but no one suffers more than the children, and the airlift was the least that we could do.”

Doctors and other aide workers were sent into the streets of Vietnam looking for orphans. Frederick “Skip” M. Burkle Jr., a physician who had been a Navy doctor during the war, was one of them. (Burkle later served in other conflicts, earning two Bronze Star medals, and was minister of health in Iraq after the U.S. invasion in 2003.)

“It was really a desperate time in Vietnam, with the small alleyways and all the rest of the stuff going on,” said Burkle, now 81 and living in Hawaii, having spent his entire career in humanitarian and disaster medicine. “I had to somehow find these orphanages. It was obviously dangerous. I was the only American or Caucasian among many.”

Families had been abandoning their children at orphanages hoping they’d be rescued.

“When they saw me as an American, they were rushing up to me, totally desperate, just giving me their children,” Burkle said. “You can’t imagine it.”

The orphanages were grim.

“I entered these orphanages without any lighting,” Burkle recalled years later in a military medicine journal. “I tripped almost immediately over an infant who was stuck to the floor in his own feces. I just looked at all these babies in disbelief.

The air reeked of jet fuel. There was a lot of vomiting and diarrhea. Once in the air, Aune was on the plane’s upper deck with the babies. The older children were on the lower level.

About 12 minutes into the flight, a cargo door blew off. The pilots tried to return to the airport, but the plane crashed and skidded into a rice paddy. Nearly everyone on the lower deck died.

On the upper deck, there was a scramble to get the babies out of the plane to waiting rescue helicopters. Aune had been badly injured, breaking multiple bones in her feet and legs, but she managed to make multiple trips in and out of the plane carrying babies in each arm.

At some point, the pain overwhelmed her.

“I asked to be relieved of duty because my injuries prevented me from carrying on,” she said.

More than 130 people were killed in the crash, including 78 children.

The incident was, at first, a huge embarrassment for Ford. But more than 3,000 orphans were eventually evacuated, and Ford met some when they arrived in San Francisco.

One of the babies who survived the crash was adopted and raised in Northern Virginia. Her name is Aryn Lockhart.

In 1997, not long after graduating from Virginia Tech, she began investigating her life story, hoping to write about it. She typed “Operation Babylift” into the nascent Internet and found an article recounting Aune’s heroism, which had resulted in her receiving the prestigious Cheney Award for valor from the Air Force.

Lockhart got Aune’s phone number. By now, the Air Force flight nurse who saved countless lives was a colonel. One day her office phone rang and it was Lockhart.

“Hello, Colonel Aune,” Lockart said. “This is Aryn Lockhart. You don’t know me but I was one of the babies on the C-5 Galaxy that crashed during Operation Babylift. I have been looking for you, and I just want to say thank you for giving me life.”

The two became friends. Now they consider each other family.

Lockhart embarked on a career as a civilian in the military and now works in public affairs for the Air Force in San Angelo, Texas. Aune, now retired, lives a few hours away in San Antonio. They see each other often.

Three years ago, they published a book together — “Operation Babylift: Mission Accomplished.”

In it, they recount how their lives collided on that plane and what came next — including a trip they took together in 2014 to the crash site.

There was no plaque or monument marking what happened.

Standing there, they could hear the airport not far away.

“Life was born out of the ashes of tragedy,” Aune wrote, “hope triumphed over despair, love trumped hate, and joy displaced sorrow.”