Afghan woman goes into labor during US military flight, gives birth aboard plane at Ramstein Air Base 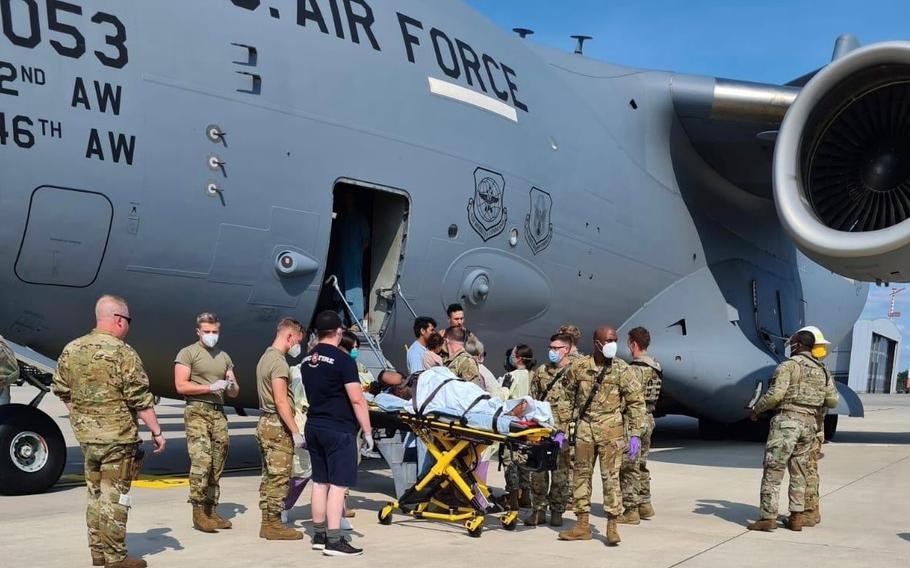 Airmen from the 86th Medical Group help an Afghan mother and family off a U.S. Air Force C-17, call sign Reach 828, moments after she delivered a child aboard the aircraft upon landing at Ramstein Air Base, Germany, Aug. 21, 2021. (Air Mobility Command)

RAMSTEIN AIR BASE, Germany — An Afghan mother gave birth to a baby girl aboard a U.S. Air Force C-17 on Saturday soon after the plane landed at Ramstein, the Air Force said.

The mother went into labor during the flight and Air Force medical crews at Ramstein helped deliver the child in the cargo bay of the aircraft, Air Mobility Command said in a statement Saturday.

The plane originated from an intermediate staging base in the Middle East, AMC said.

Most evacuation flights into Ramstein have come from Al Udeid Air Base in Qatar, where evacuees were first flown after leaving Kabul following the Taliban’s seizure of the capital city Aug. 15.

The flight from Qatar to Ramstein is about six hours. While in labor, the woman began experiencing complications due to low blood pressure, AMC said. The aircraft commander descended to increase air pressure in the aircraft, a decision that helped stabilize and save the mother’s life, the AMC statement said.

Upon landing, airmen from the 86th Medical Group boarded and delivered the child in the aircraft cargo bay. The Air Force did not say what time the baby was delivered.

The baby and mother were transported to a nearby medical facility and are in good condition, AMC said.

They likely were taken to Landstuhl Regional Medical Center, the largest U.S. Army hospital overseas, which is a few minutes’ drive from Ramstein. Officials at Ramstein have said evacuees with medical emergencies that can’t be handled there would be transported to LRMC.

AMC did not say whether this was the first child delivered on a C-17. On Friday, Air Force officials at Ramstein said Air Force aeromedical evacuation crews had been dealing with various medical emergencies during Afghanistan evacuation flights, including reports of inflight births.

Col. Adrienne Williams, commander of the 521st Air Mobility Operations Wing at Ramstein, which is part of AMC and coordinates logistical air movements, said in an interview earlier Saturday that she couldn’t confirm the reports.

But births wouldn’t be surprising given the stress evacuees are under, Williams said.

“When you think about where they’re originating from … and then just the transiting to get to that place to here, it takes a mental toll, a physical toll,” she said.

Since Friday, Ramstein has received just under 5,000 evacuees from Afghanistan on more than 20 flights, a base official said Sunday morning. The base has set up tents and facilities on the flight line, where evacuees are living while waiting for transportation to the United States.