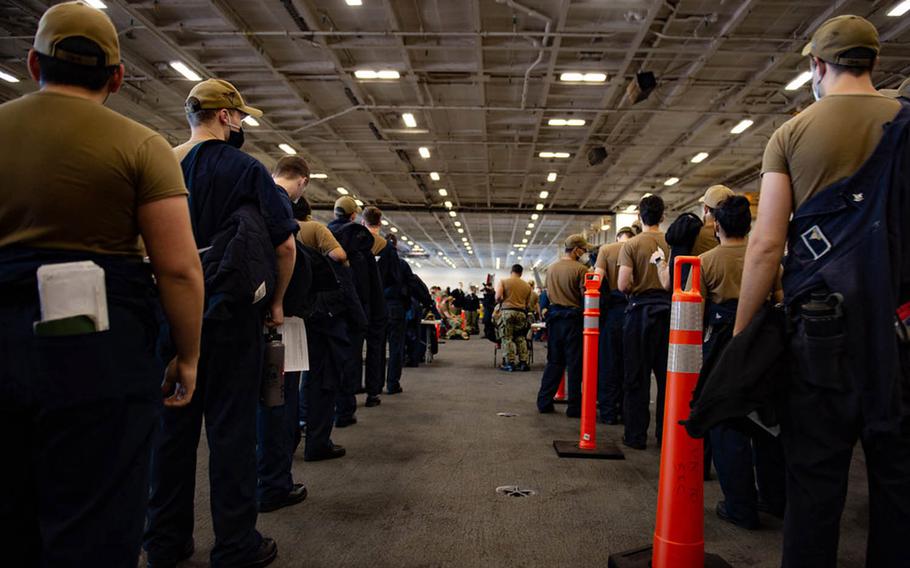 Sailors assigned to the USS Carl Vinson stand in line to receive the coronavirus vaccine, Friday, Feb. 19, 2021, while the aircraft carrier is docked in San Diego. (Christian Huntington/U.S. Navy)

SAN DIEGO, Calif. (Tribune News Service) — San Diego military medical providers are ready to vaccinate up to 7,000 troops per day when the Pentagon makes the coronavirus vaccine mandatory, which it is expected to do in coming days, according to Navy Medical Forces Pacific.

Military treatment facilities are planning to go wherever they’re needed to get shots into arms, the Navy said, whether that’s on the pier next to ships or in the field at Camp Pendleton.

On Monday, the Food and Drug Administration fully approved Pfizer’s COVID-19 vaccine, clearing the way for the Pentagon and other large employers to mandate it for its personnel. John Kirby, the Pentagon press secretary, said Monday the Defense department is preparing to issue orders that will require all service members to be vaccinated.

More than one million service members are fully vaccinated as of Tuesday, according to the Pentagon’s coronavirus tracking website. An additional 244,000 have received their first dose. Cmdr. Chris Lopez, a Naval Medical Forces Pacific spokesman, said the Defense department will release an estimate of how much time it will take to vaccinate remaining unvaccinated service members.

More than two-thirds of the San Diego County’s active-duty military population of 110,000 is fully vaccinated, according to the latest numbers from the Navy.

Kirby said Monday that the vaccine mandate is part of the department’s effort to ensure the safety of service members and the communities in which they live around the country. The military does offer religious and medical exceptions to vaccines to some service members, the Pentagon said.

Service members receive a host of vaccines upon entering the service plus mandatory boosters and the annual flu shot. Depending on where around the world they serve, military members can expect to receive as many as 17 different vaccines — the coronavirus vaccine bumps the number up by one.

Military COVID-19 deaths, while rare, have risen along with the surge of cases associated with the Delta variant of the virus. The Union-Tribune reported Aug. 9 that 28 active-duty service members had died of the virus. Six more military members have died since, according to the Pentagon, for a total of 34 deaths.

Five of the deaths came between Aug. 11 and Aug. 18, Military Times reported, making that week the deadliest for troops during the pandemic.

Almost 2,000 service members have been hospitalized with the virus since the beginning of the pandemic, which suggests a military hospitalization rate of just under 2 percent.