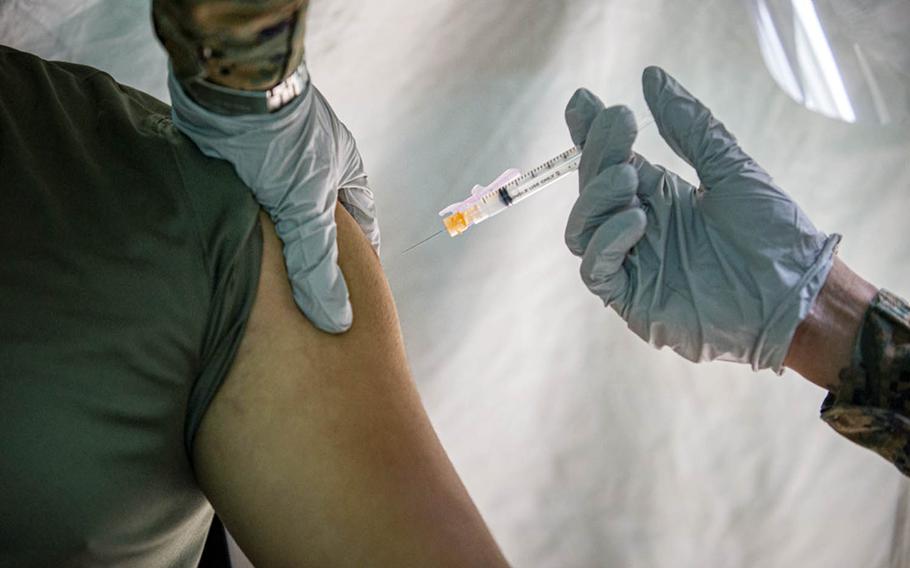 About 58% of active-duty Marines and 61% of active-duty airmen are at least partially vaccinated against the coronavirus as of Wednesday, Place told reporters at the Pentagon.

Nationwide, about 65.7% of adults had received at least one dose of the vaccine as of Monday, according to the latest statistics from the national Centers for Disease Control and Prevention.

Some of the disparity could be attributed to the ages of active-duty service members, said Dr. Terry Adirim¸ acting assistant secretary of defense for health affairs. The most-vaccinated demographic of Americans are people ages 65 or older with 87.5% having received at least one shot, which skews the national average higher, according to the CDC.

“I don't want to put too fine a point on this, but 31% of our active duty are under the age of 35, which is one of the populations that's perhaps the toughest to have vaccinated nationally,” Adirim said.

Still, the Navy and Army’s partial-vaccination rates are above the national rate, with 77% of active-duty sailors and 70% of active-duty soldiers having received at least one vaccine, Place said. He could not provide numbers on how many active-duty service members were fully vaccinated.

Wednesday was the first time this year that Place broke down active-duty vaccination rates with Pentagon reporters in his near-monthly coronavirus news briefings. Typically, the DHA directs reporters to vaccine data posted on the Defense Department website that lumps active duty, Reserve and National Guard troops together.

The shots remain optional for the military while the vaccine is under emergency-use authorization, though Defense Secretary Lloyd Austin is considering whether to mandate the shot for all troops once the vaccinations receive full Food and Drug Administration authorization, acting Navy Secretary Thomas Harker told the House Armed Services Committee on June 15.

It was also unclear Wednesday why nearly 20% fewer active-duty Marines have received at least one coronavirus vaccine compared to the active-duty sailors in their sister service. However, Navy officials have said the service’s decision to allow vaccinated sailors to avoid quarantines before patrols and during port visits might serve as an incentive to get the shot.

Place urged all service members to receive the vaccine because the rate of coronavirus hospitalizations has dropped since the vaccine rolled out. Compared to a peak of 240 troops with coronavirus in the hospital on Jan. 8, there were 21 as of Wednesday — none of whom had been vaccinated, Place said.

“The benefits of vaccination are remarkably clear,” he said.