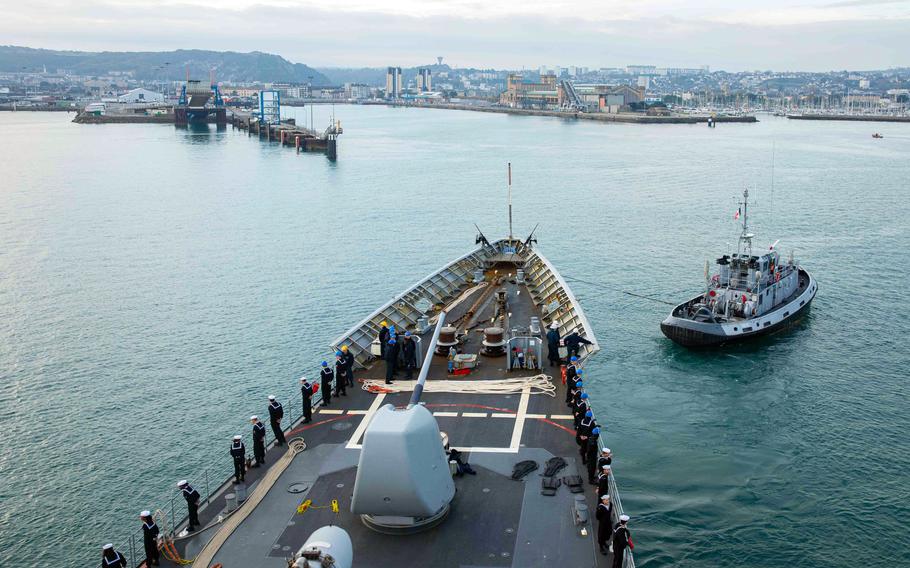 The cruiser USS Normandy pulls into Cherbourg harbor Nov. 14, 2022, in its namesake region of France during deployment as part of the Gerald R. Ford Carrier Strike Group. (Malachi Lakey/U.S. Navy)

The cruiser USS Normandy made a commemorative port call this week in its namesake French region, site of the historic D-Day landings that turned the tide of World War II.

During the Monday stopover in Cherbourg, officials from the ship planned to participate in a wreath laying at the Utah Beach American Memorial, the Navy said in a statement the same day.

The memorial honors the U.S. VII Corps forces that fought in the liberation of the Cotentin Peninsula in June and July of 1944, according to the American Battle Monuments Commission.

Representing the ship’s sailors in remembering “the countless French, American and allied heroes who gave their lives on these hallowed grounds is a moment in time that will not soon be forgotten,” said Capt. Gary Chase, commanding officer of USS Normandy. 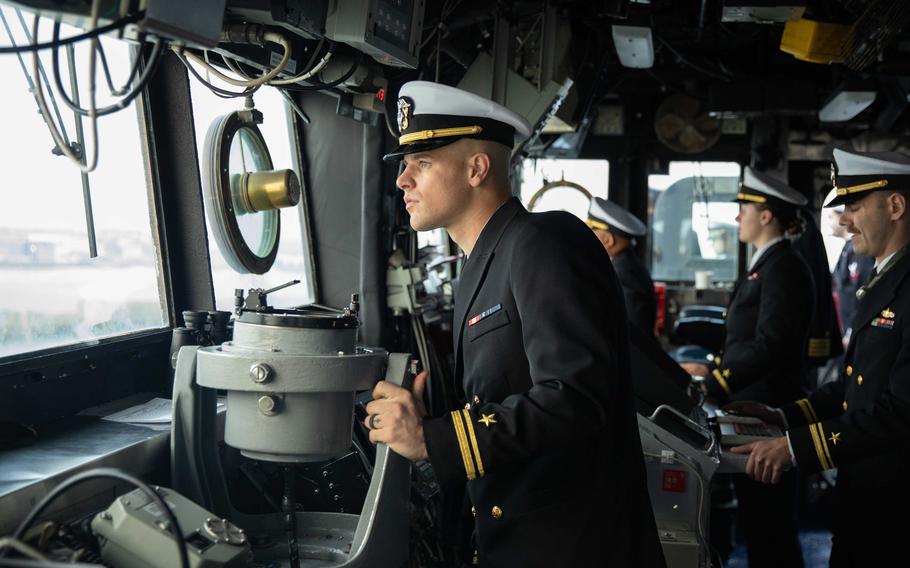 Ensign Seth Brock stands as conning officer on the cruiser USS Normandy as it pulls into Cherbourg, France, on Nov. 14, 2022, as part of the Gerald R. Ford Carrier Strike Group. (Malachi Lakey/U.S. Navy)

Part of the Gerald R. Ford Carrier Strike Group, the cruiser was named for the Battle of Normandy. The Allies landed more than 2 million troops in northern France from June 6, 1944, to Aug. 21, 1944, according to Navy.mil.

Those forces pushed back the Germans and liberated Paris, among other accomplishments that ultimately led to Nazi Germany’s defeat.

Battle losses included 72,911 Allied service members who were killed or went missing over that time period, according to a 2014 White House fact sheet.

Normandy’s visit was not only a reminder of that sacrifice but also an opportunity “to reinforce the critical partnership” between the French and the Americans, Denise Bauer, the U.S. ambassador to France said in a statement.

Also on Monday, the aircraft carrier USS Gerald R. Ford and destroyer USS Thomas Hudner arrived in Portsmouth, England, the ships’ first port call of their deployment in the U.S. Naval Forces Europe area of operations, the Navy said in a separate statement.

The first-in-class Ford, which is the Navy’s first new carrier designed in more than 40 years, is on its maiden deployment.