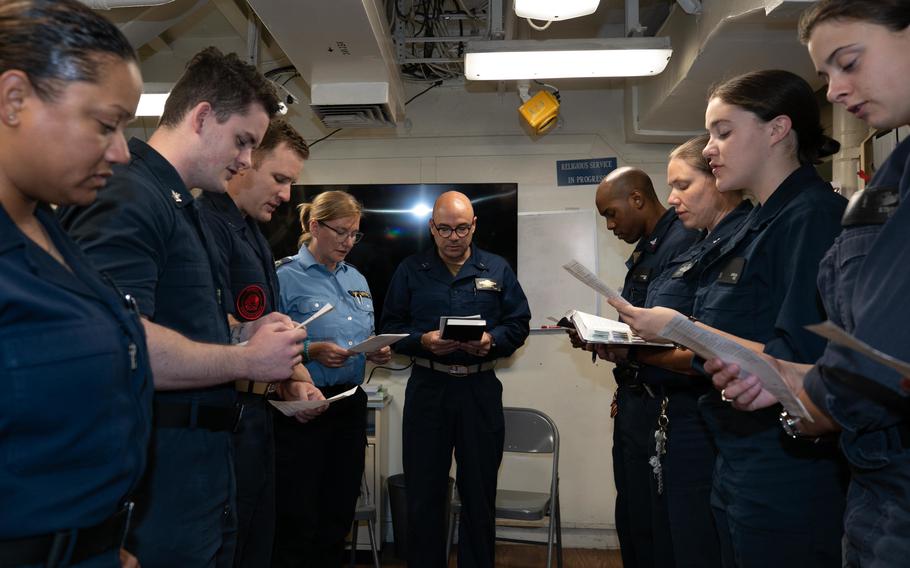 (Tribune News Service) — During NATO exercises, there’s often a chance for sailors to spend time on allies’ ships, but Norfolk-based USS Kearsarge had a chance to break ground with what the Navy calls “interoperability”: it hosted a German navy chaplain.

It was part of the first chaplain-led portion of the annual BALTOPS exercise.

The exercise brought German chaplain Cmdr. Katja Bruns by U.S. helicopter from German frigate Sachsen to the destroyer USS Porter and from that Rota-based ship to the Kearsarge — a test of coordination for U.S. Navy air crew and German flight deck sailors. A German helicopter ferried her back from Kearsarge to Sachsen.

Bruns conducted religious services aboard Porter, while on Kearsarge she took part in staff planning meetings to round out her familiarization of U.S. Navy-Marine Corps chaplaincy operations at sea, and talked with Navy chaplains about how American and German religious support sailors handle general quarters and burials at sea.

She also spoke with sailors and Marines who wanted to practice their German.

“These interactions are important for highlighting the professionalism and capabilities of our NATO Chaplain Team, but they also reveal our common sea heritage and our common humanity,” said Cmdr. Thomas Cook, Kearsarge Amphibious Ready Group chaplain.

“We share many of the same values with our NATO partners in ministry, and have a lot to learn from each other as military ministry professionals,” he said.

The exercise involved exchanges of 23 chaplains of different religious backgrounds from eight nations to different allies’ ships to test their ability to deal with challenges like Bruns’ helicopter rides and quickly learn how to address the varying religious and secular care needs of different nations’ navies.

“We want to be sure that all the navies here will have spiritual support. And if they can’t get it from their own ship, then we should find a way to give them the support they need, even if it’s from another country,” said Belgian Navy Moral Counselor 1st Class Emmanuel Reynaerts.

During the BALTOPS exercise, the Kearsarge Amphibious Ready group — Kearsarge, USS Arlington and USS Gunston Hall — and its embarked Marines from the 22nd Marine Expeditionary Unit drilled with Swedish forces on amphibious landings and several operations landing troops from the ships’ helicopters.

The exercise was also a chance to demonstrate the Marines’ new “expeditionary advance base operations” approach, which focuses on small, mobile units, operating in areas where there are few resources for them to tap, from bases or on ships that are hard for enemies to see.