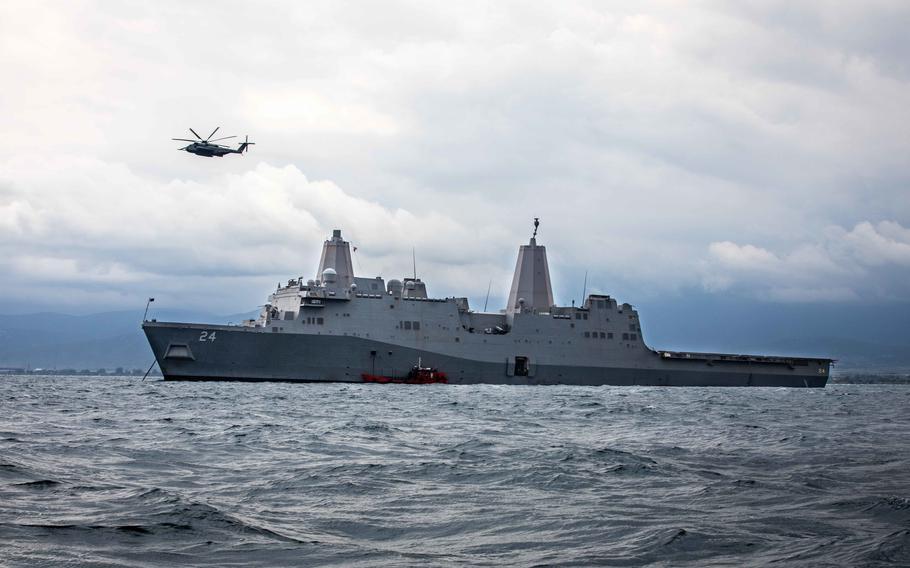 (Tribune News Service) — Less than a week after crossing the Arctic Circle north of Iceland, the sailors and Marines of Norfolk-based USS Arlington were some 3,300 nautical miles to the south and east, in the famously dark waters of the Aegean and drilling with Greece’s 32nd Hellenic Marine Brigade as well as the Hellenic Army’s Special Warfare Command.

It was the kind of rapid movement between radically different climates that’s hard to manage when training off the Virginia capes.

“The weather always gets a vote in the types of operations and mission essential tasks we train to, but, operating in these environments taught us much more than we anticipated. A fast movement may not be able to occur in training, due to the weather simply not supporting the plan,” said Col. Paul Merida, commanding officer of the 22nd Marine Expeditionary Unit, which is embarked with Arlington and the two other Hampton Roads-based ships of the USS Kearsarge Amphibious Ready Group.

Those ships — Kearsarge and USS Gunston Hall with their Marines — had teamed up last month with Arlington, a Navy submarine and patrol aircraft and forces from France, Germany, Iceland, Norway, Portugal and Great Britain on a NATO exercise in the North Atlantic’s vital Greenland-Iceland-United Kingdom.

From there, Kearsarge and Gunston Hall headed to Norway for some more High Arctic drilling and then to the Baltic, where they’ve started exercising with Estonia’s 2nd Infantry Brigade and Center of Strategic Communication as part of major test of combat readiness.

The challenges include command and control and operations planning for three ships and a shore team, each in a different time zone, as well as shifting tools and material located on a ship in the Arctic Circle to a ship in the Mediterranean Sea, Guluzian said.

Making sure the medical care available in Kearsarge’s more extensive sick bay is accessible to sailors and Marines on the other two ships is another issue he and his staff keep a watchful eye on. 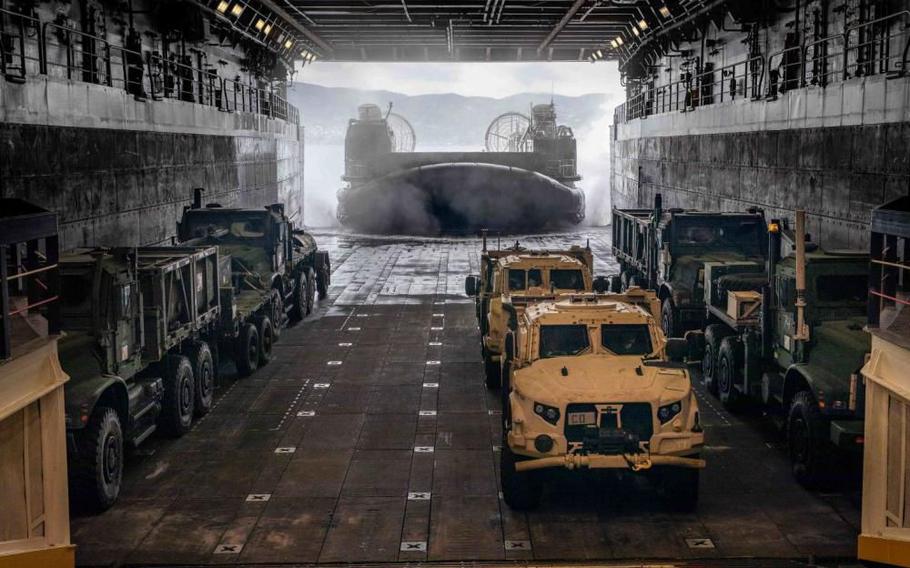 And while it is more convenient when all three ships are in the same waters, operating at a distance has meant working with many more allied partners, he said. That’s an important part of deployments from Hampton Roads these days, as is dealing with the difficult operating conditions of the northernmost reaches of the North Atlantic.

“There’s a reason, specifically while training in Norway, that the first event our Marines and sailors participated in was a robust cold weather training package, instructed by the Norwegians,” Merida said.

His Marines and the Kearsarge and Gunston Hall sailors applied those lessons in several live-fire exercises, as well as a combined-level brigade attack and a tactical recovery of aircraft and personnel.

“Every element of the 22nd Marine Expeditionary Unit had to modify something in relation to the weather,” Merida said.

“We thought coming to Norway would be a challenging opportunity. We were right — it was ... I’ve never heard of an ARG-MEU team operating above the Arctic Circle, but we proved it can be done,” he added.

Now, with Marines in the Baltic and Aegean, “the biggest challenge is command and control,” he said. Merida has shuffled some key staff to each location, and his whole team has a heavier planning workload because different units of the 22nd are doing different things in different places with different partners all at the same time.

“We’ll have to track multiple operations going on from multiple ships and there is the additional challenge of just being able to communicate securely from one location like the Kearsarge to another location such as aboard the Arlington,” he said.

For the Arlington and its Marines, spending May in Greece will be a chance to exercise battalion-level command and control and company-level combined arms training. Arlington drilled on maneuvering with the Hellenic Navy’s tank landing HS Chios (L 173) and frigate HS Salamis and conducted ship-to-shore and air operations to off-load U.S. Marine Corps equipment and vehicles for the joint U.S.-Greek Alexander the Great 2022 training exercise.