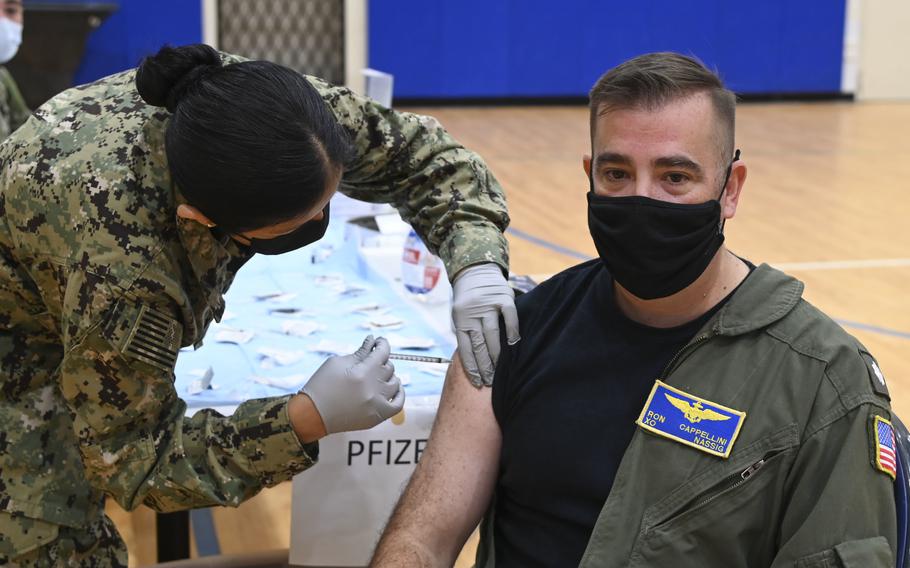 WASHINGTON — Navy commanders have been ordered to begin the separation process for sailors who have refused to take the coronavirus vaccine, according to service guidance issued Wednesday.

Rear Adm. James Waters, the Navy’s director of military personnel plans and policy, said the service wants “to keep every sailor in uniform,” but now more than two weeks since the service’s immunization deadline passed and it’s time to require vaccine refusers to leave the Navy.

“There are sailors who, in spite of our best efforts, continue to steadfastly refuse,” Waters told reporters Tuesday during a teleconference. “Personally, it disheartens me to see any sailors leave because they refuse the vaccine.”

However, sailors who missed the Nov. 28 deadline to receive the vaccine but change their mind can notify their chain-of-command and halt their separation if they get immunized, Waters said. So far, 919 sailors have gotten the shots since Nov. 15 — the last day for active-duty sailors to receive the vaccine to meet the deadline.

“After the deadline, we [have been] working with each and every one of those sailors in an effort to retain them and we'll do the same for anyone else who steps forward to get their shot,” Waters said.

The Navy’s announcement comes days after the Air Force on Monday announced it had discharged 27 service members for refusing the vaccine. The service’s Nov. 2 deadline was the earliest of all the services branches.

The Army has the last active-duty deadline, which is Wednesday.

No service has required a coronavirus booster shot for its force to date, but Waters said it is "under active discussion" at the Pentagon.

As of Dec. 9, less than 2% of active-duty sailors had not received the vaccine, according to the Navy’s most recent update. About 5,731 sailors remain unvaccinated, about half of whom were awaiting decisions on religious accommodation requests.

For sailors who continue to refuse the shot, the new guidance spells out how they will be separated from the service. Most separations will happen in the first six months of 2022, though some could continue past June 1, Waters said.

First, those who are eligible to retire or voluntarily leave the service before June 1 can do so through “normal but expedited processes,” resulting in an honorable discharge, Waters said.

“This allows for a fully vaccinated force as soon as possible, while encouraging personnel refusing the vaccine and eligible to separate or retire in the near term to do so,” he said.

However, unvaccinated sailors not eligible to leave the service voluntarily by June 1 and who do not have an approved exemption will be forced to leave the Navy on the basis of misconduct for refusing a lawful order, Waters said.

They will still receive an honorable characterization of their military service, meaning they can keep their Department of Veterans Affairs benefits such as educational and health care assistance.

“Any unfulfilled obligations due to things like education and bonuses will have to be repaid [by the sailor],” Waters said.

Those with more than six years of service are entitled to a separation board of inquiry, with the least favorable service characterization being general discharge under honorable conditions, Waters said. Sailors with general discharges are still eligible for most VA benefits, except G.I. Bill educational benefits.

However, those sailors can waive the board inquiry in exchange for an honorable discharge, Waters said.

He said this option is offered because of the extensive, time-consuming nature of the administrative review required for a board inquiry.

“[It] helps the Navy achieve our goal of a fully vaccinated force as quickly as possible, and it helps the service member achieve the best possible characterization of separation as we part ways based on their decision to refuse the vaccine,” Waters said.

The Navy continues to process vaccine exemption requests for medical, administrative or religious reasons. Those making requests can stay in the Navy until receiving approval or denial, at which point they will have five days to get their first shot or begin the separation process.

Unvaccinated sailors will also face other limitations, which can sometimes affect deployment and leave opportunities.

“As an expeditionary force deployed around the world, we interact with allies and partners who have different perspectives on the absolute need for the vaccine, and there are some that just won't let you enter the country,” Waters said. “We will have to honor that in those cases, and so that's just an example [of a limitation].”