Vaccine holdouts in US military approach 40,000 even as omicron variant fuels call for boosters 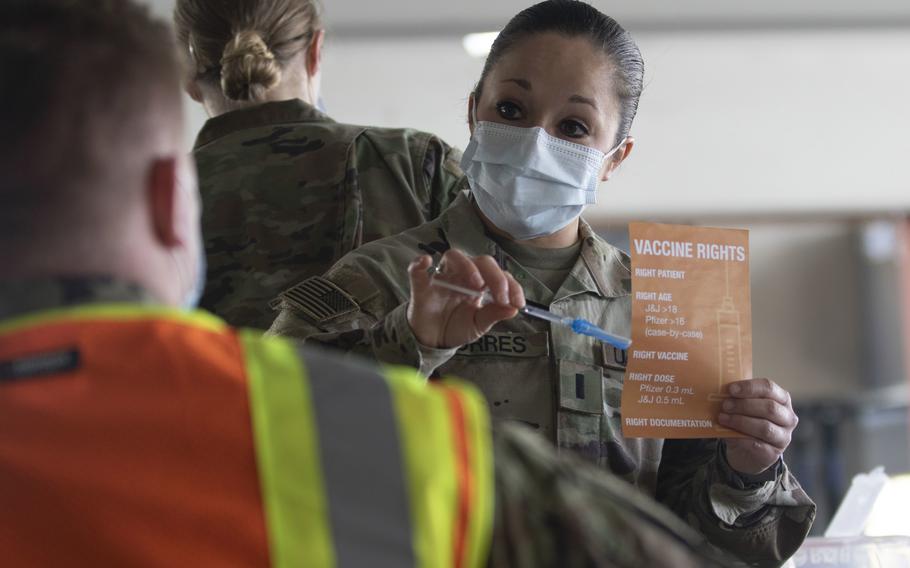 WASHINGTON - The number of active-duty U.S. military personnel declining to be vaccinated against the coronavirus by their prescribed deadlines is as high as 40,000, with new Army data showing that, days ahead of its cutoff, three percent of soldiers either have rejected President Joe Biden's mandate or sought a long-shot exemption.

While overall the vast majority of service members are fully vaccinated, military analysts have characterized the number of refusals and holdouts as a troubling indicator in a rigid, top-down culture where decision-making often is predicated on the understanding that the troops will do as they are told. It also suggests the nation's divisive politics have influenced a small but significant segment of the Defense Department, historically an apolitical institution.

Military leaders have few options to address the dissent other than to hope that, as waiver requests are denied, more troops will choose to fall in line. The alternative, the Pentagon has said, is to purge the ranks of those failing to meet requirements, though some of those roughly 40,000 service members opting out had already planned to leave the military.

But the numbers are unlikely to change much before Wednesday, when the Army's deadline arrives and all 1.3 million active-duty personnel are expected either to be fully vaccinated or have an exemption in hand.

Posing added concern, officials have said, is the emergence of the virus's omicron variant, which public health experts fear may elude - to an extent that's still unknown - the protection afforded by existing vaccine regimens. In response, the Biden administration has begun an aggressive campaign urging those eligible to get booster shots, though it's unclear how this may impact federal policies. It's an active discussion among Pentagon leadership, Kirby said, noting that, for now, the Defense Department is encouraging troops to get the extra shot.

"Rest assured," Kirby added, "that should there be an addition to that in terms of the mandatory vaccine requirement, we will clearly communicate that and be transparent about it."

The more than 14,000 Army personnel who remain unvaccinated join another 25,000 approximately in the active-duty Air Force, Navy and Marine Corps who have also challenged the Biden administration's directive, according to a review of each service's official data. An additional 10,700 troops in the Air Force Reserve and Air National Guard remained unvaccinated past their Dec. 2 deadline, pushing the military's overall tally of holdouts closer to 50,000.

Numbering roughly 475,000, the Army is the largest of the military services and set the last deadline by which active-duty troops were required to comply with the mandate. The Air Force, which had the military's most ambitious deadline of Nov. 2, continues to process thousands of appeals from airmen who declined to be vaccinated on medical or religious grounds. The Navy Department, which includes the Marine Corps, has said personnel should expect very few waiver requests to be granted.

Officials have said such exemptions would be exceedingly rare. To date, across the entire military, only a handful of permanent medical waivers have been approved but so far no religious exemptions.

The Navy Department set a Nov. 28 deadline and vowed to move aggressively in discharging those who decline to follow orders. Like the Air Force, the Navy said service members have five days to start vaccinations if their exemptions are denied. The Army took a softer approach, saying that vaccine refusers would undergo counseling before facing punitive action that would threaten their careers, though continued defiance would risk dismissal.

That tens of thousands of troops are opting out raises questions about the state of military culture, which fundamentally survives on compliance, said Katherine L. Kuzminski, a military policy expert at the Center for a New American Security, a Washington think tank.

"It goes against military values of following through with lawful orders," she said. "It raises questions about the posture of the services in other uncomfortable situations," she added, like large-scale military operations where hesitating to act on orders in some situations can be disastrous.

Active-duty troops account for 1.3 million of the 2.1 million personnel of the Pentagon's total force, which includes military reservists in each of the four service branches and the soldiers and airmen who constitute each state's National Guard. The Air Force Reserve and Air National Guard have had their deadline pass. Navy and Marine reservists - where about 18,000 have not received any dose - face a Dec. 28 deadline.

The Army set the National Guard and Reserve deadline for the end of June, and a combined total of about 170,000 soldiers have not received any shot, their numbers show. Defense officials have said rates in the Guard and Reserve may be higher than what's reflected in official data, as some service members may have gotten vaccinated on their own but haven't yet reported it.

Coronavirus vaccines became available to military personnel starting in late 2020. The Pentagon mandate dates to August, when Austin announced that, as a part of the administration's broader plan for jump-starting stagnant vaccination rates across the country, coronavirus shots would be added to the bloc of compulsory immunizations for all U.S. troops - a list that includes injections to ward off hepatitis A and B, Measles, mumps, rubella and other maladies.

Republicans in Congress, and at least one GOP governor, have questioned the president's authority to direct such a mandate, with many arguing that vaccination should be a personal choice. Some lawmakers warned there would be an exodus of experienced personnel as a result. A similar directive for federal contractors to be vaccinated or submit to regular testing also sparked blowback, and in recent days two Senate Democrats - Sen. Joe Manchin of West Virginia and Sen. Jon Tester of Montana - backed a Republican proposal seeking to undo Biden's vaccination rules for private employers.